Here’s an speedy approach to preparing a home-cooked turkey for Thanksgiving for a small group. Everyone likes a home-cooked meal but who wants the all the work. This recipe is simplifies things quite a bit. The secret is use only the turkey breast, de-bone it and fill it with a savory Leek and Spinach Stuffing. This speeds up the cooking time and my turkey breast was cooked in just over one hour. It was tender and flavorful. The leek and spinach stuffing adds a different twist to the entree. Plus, you will really “wow” your guests and family when you carve the de-boned breast. Don’t tell them. Just slice the breast at table and see their reactions. We’ve had some good times with this! It really isn’t difficult to de-bone a turkey. Here’s what we did. 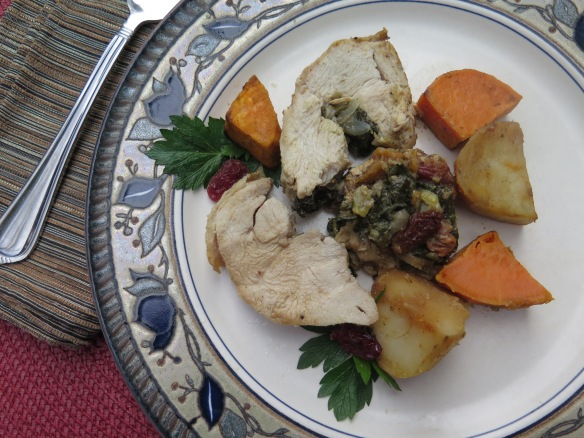 I think everyone likes to enjoy Thanksgiving dinner with family and friends. The person who gets to cook the turkey is the hero, but often he or she winds up spending alot of the day in the kitchen. And cooking a whole turkey isn’t that easy. The lean breast meat can turn out dry or alternately the thighs and legs might be under-cooked.  And whether you soak the turkey in a brine, marinate the turkey, cook in a roaster or fry it — this can be a time consuming and challenging project, especially getting things timed just right for the big feast. 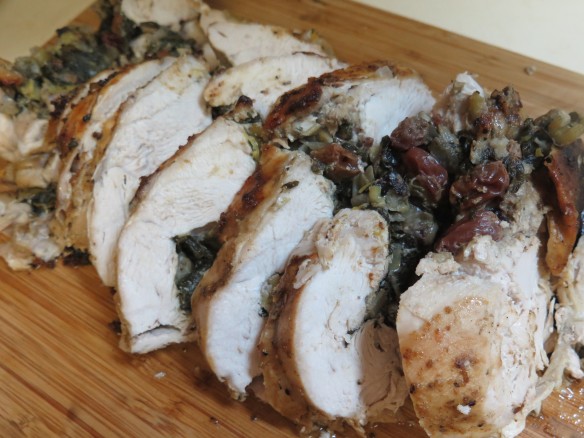 We discovered a technique some years ago which involves de-boning the entire turkey and filling the cavity with a stuffing. The turkey cooks quickly and evenly. If you are somewhat skeptical about de-boning a turkey, it does work. We’re not completely crazy. The technique is to use a sharp, small knife and start at the back bone at the tail end of the turkey, cut away the rib cage meat, break the joint of the thigh and then carefully cut around the breast bone. Stuff the turkey and tie shut the neck and breast openings. This also works with a chicken and we made a wonder Chinese dish called “Eight Jewel Chicken” with a de-boned chicken. So, we practiced on alot of chickens before progressing to a turkey.

An even quicker method is to purchase just a turkey breast and de-bone it. This five pound breast is about the right amount to feed six people — a small group. And it cooked in one hour and 15 minutes. Leave it alone while it roasts — no need to keep checking on it — and enjoy the day. 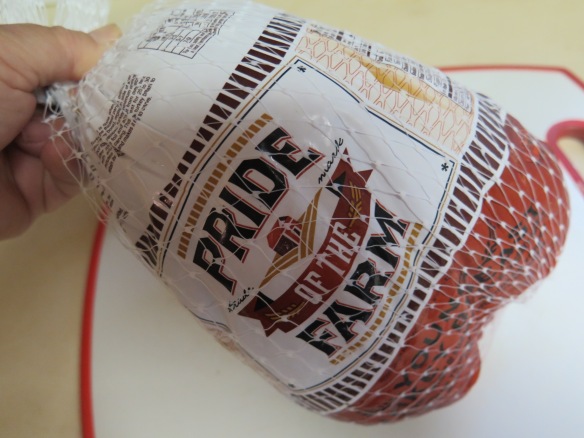 My husband gets the job of de-boning the turkey. Start along the back bone and gently cut the meat and tendons away from the ribs. Carefully cut out the breastbone. Remove the tendons. The breast will be flat as a pancake, but once you add the stuffing it will retain it’s original shape. 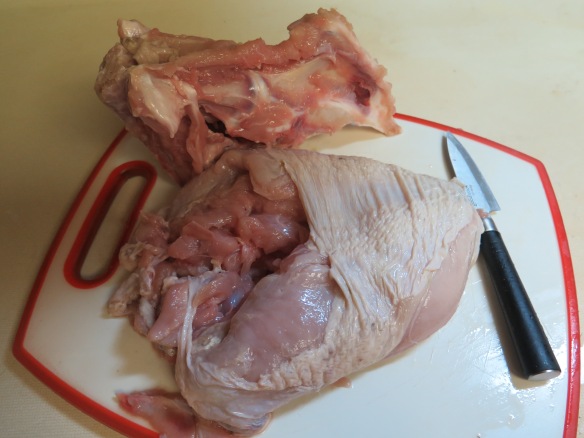 While the breast roasts, take the rib cage carcass, add an onion, celery, carrot and the tops of the leeks and and water to cover the turkey bones to make a flavorful turkey stock. Yes, do two things at once! The aromatic broth makes a great soup the next day — such as Turkey Noodle Soup. Or I will freeze this broth for a couple of weeks and thaw it out to make a flavorful gumbo around Christmas time. (See upcoming post on Cajun Chicken and Sausage Gumbo.)

While my husband de-boned the turkey breast, I made the leek and spinach stuffing (which really is the best part of the entree). I love cornbread stuffing, but sometimes it is time to try something new. My original turkey recipe used a stuffing of leeks, spinach and veal. I’m omitting the veal and adding succulent raisins soaked in wine. Yum. 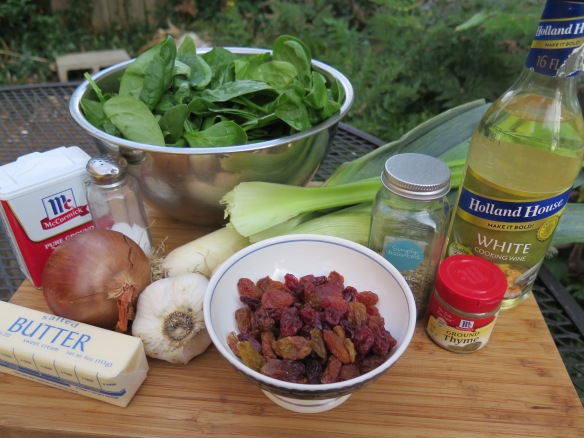 This stuffing is easy to make, but it did take about 30 minutes to get everything cooked. Saute the leeks, onions, celery and garlic in butter or margarine about 10 minutes until wilted. 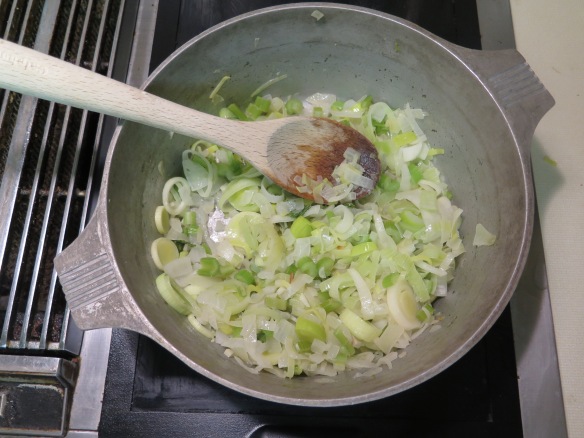 Add in the spinach. This seems like a lot of spinach but it cooks down. 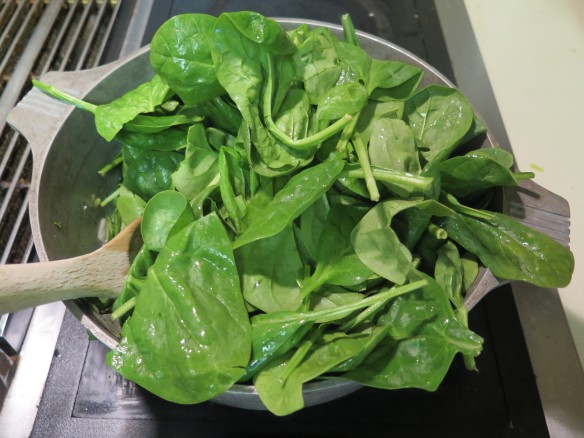 After another 10 minutes, add the wine soaked raisins and seasonings. Cook for 10 minutes longer, uncovered, until the juices evaporate. 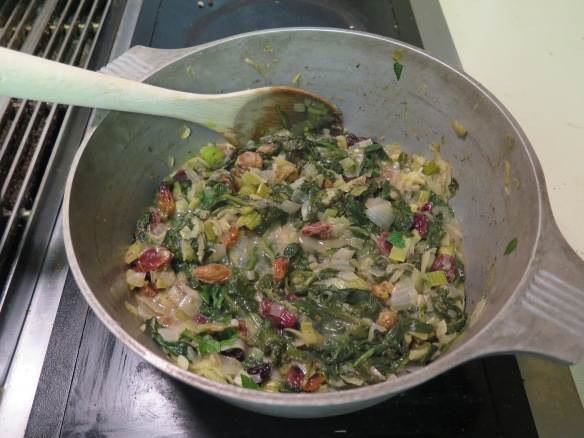 Fill the turkey breast cavity with the stuffing. 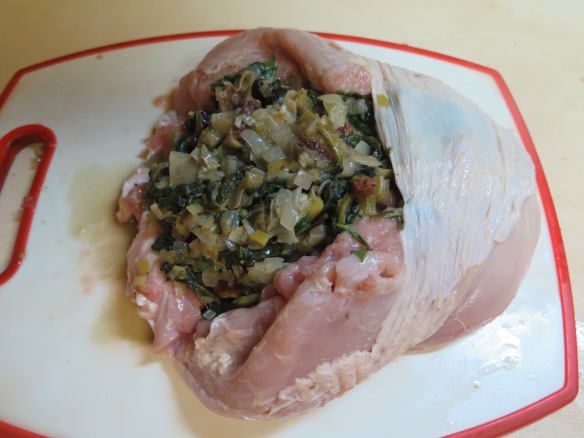 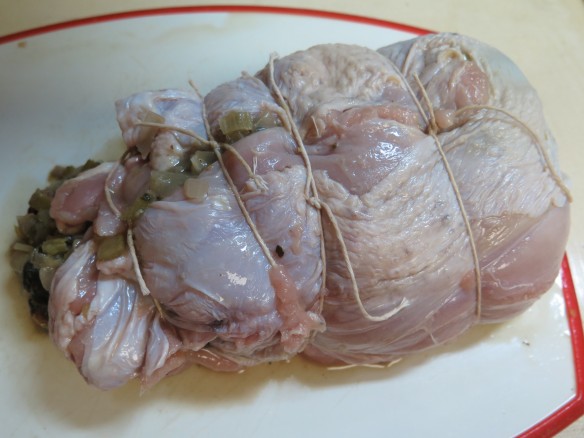 Place in roasting pan and surround with sweet potato and russet potato chunks. Rub butter, mashed garlic and Cajun spices on the turkey. I added olive oil and salt to the potatoes. The potatoes, cut into chunks, cook in the same amount of time as the turkey breast. Another way to save both time and pots and pans! 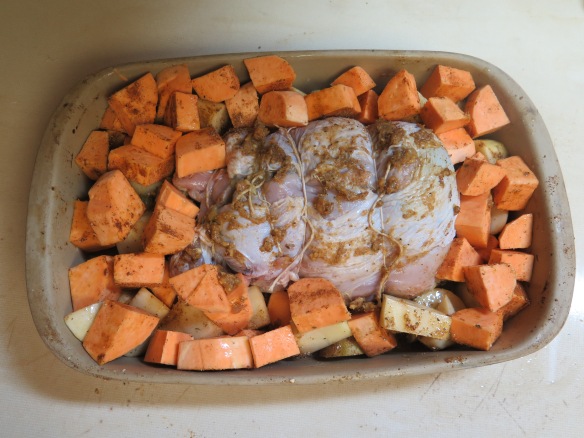 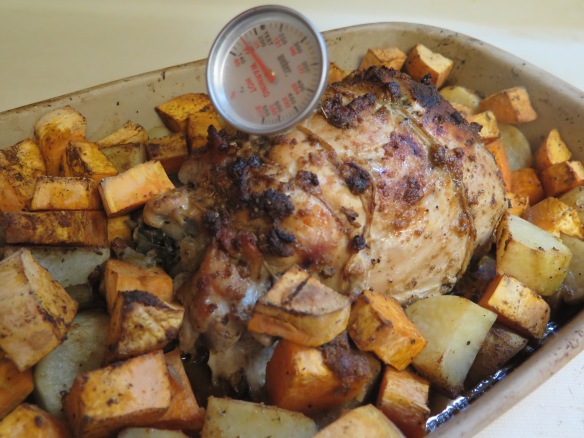 Let the breast set for 15 to 30 minutes. Then carve. Since there are no bones, it is easy to cut across the breast meat. This will really impress your family! 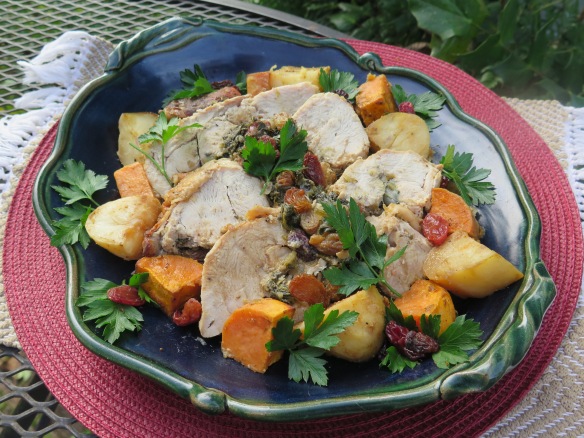 And for our anniversary, we like to take a visit to the lakes close to LSU to view the flocks of American While Pelicans. The birds stop here along the Mississippi Flyway during their journey from the Rocky Mountains to further south and breeding grounds in warmer weather. The flocks of birds don’t stop here every year, but when they land here for a few weeks, they put on quite a show. Well, by the time we arrived, the white pelicans had left, but we saw other birds. These must be egrets. 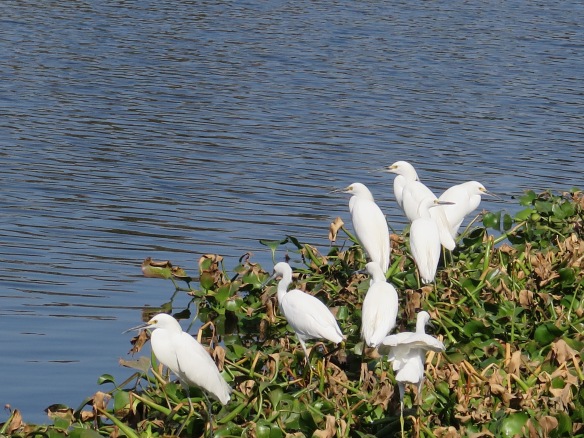 These birds fly majestically overhead, too. 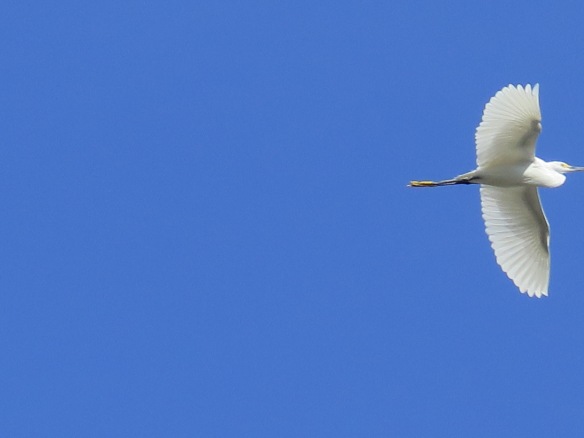 We were able to get quite close before the egrets took off and skimmed across the lake. 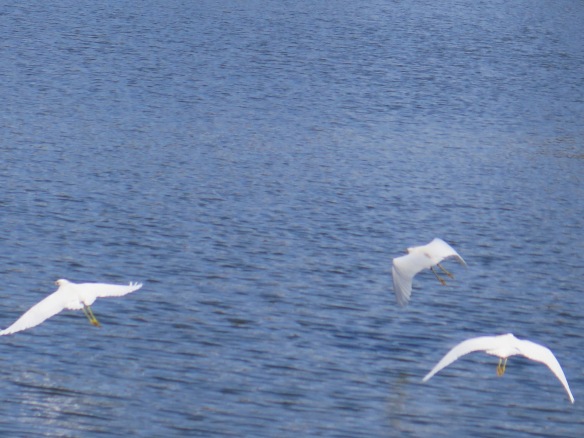 And these birds are cormorants and mallard ducks. This was a relaxing way to spend the morning on a very special day. 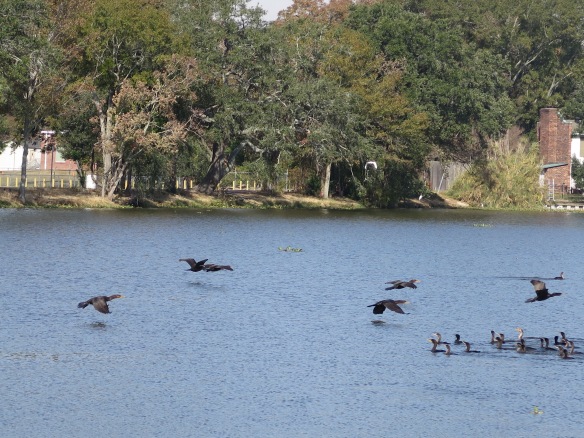 Lots of photo taking opportunities even if we missed the American White Pelicans this year. 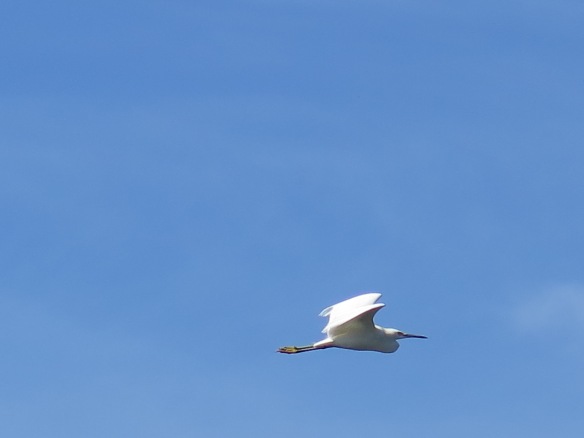