Pumpkin Chiffon Pie is undoubtedly the best pumpkin pie I have tasted. It is from a treasured family recipe that has been served at every Thanksgiving meal in my memory. Light and airy with a gingersnap crust, it’s a great way to end this holiday meal.

Pumpkin Chiffon Pie is a favorite recipe of my mother-in-law. She takes great pride in making it each year for Thanksgiving dinner, and at ninety-years of age, she hasn’t slowed down. I cannot imagine a Thanksgiving without it. She always makes three pies “from scratch.” I could skip the dinner and go straight to the pie.

A chiffon pie is a light, airy and smooth pie which begins with an egg custard base and includes unflavored gelatin and stiffly beaten beaten egg whites in the filling. The topping is usually whipped cream. It is a relatively recent “invention” first showing up in magazines in the 1920’s. Chiffon pies became quite popular in the 1940’s and 1950’s according to The Food Timeline Library.

Knox gelatine probably had something to do with these pies. Charles Knox was the leading manufacturer of gelatine in the early 1900’s and had rather flamboyant methods for advertising his gelatine including purchasing a race horse which he renamed Gelatine King. When he passed away in 1908 his wife took over the business–she was one of the few women to head a major company during that time period. She realized that housewives were the main users of gelatine and began a test kitchen. She developed hundreds of recipes which she promoted to home economics teachers, printed in newspaper columns and printed on package inserts.

I found a number of chiffon pies recipes in old cookbooks. “Granddaughter’s Inglenook Cookbook,” which was published in 1942, included cherry chiffon, coconut, lemon and pumpkin variations. They all sound delicious and tempting. The 1951 edition of the Better Crocker cookbook, from my mother, listed a variety of chiffon pies. The “Joy of Cooking” cookbook added chiffon pie recipes in their early additions.

Here is what my mother-in-law said:  “Perhaps in the 1940s, my mother gave me “Thoughts for Food, A Menu Aid” a really neat cookbook. Soon afterwards, I discovered “More Thoughts for Food,” published in 1943, and I bought it as well as one for my mother. The recipe is in the chapter “Friends for Dinner,” Page 184. Sadly, that page is spattered and disreputable looking from years of making what they simply call “Pumpkin Pie.” I’ve called it Pumpkin Chiffon Pie because of its texture. I modified it ever so slightly, including baking the crust instead of chilling it.”

Pumpkins are plentiful in the fall where barrels of pumpkins can be found at farmer’s markets and grocery stores. Here’s a booth at the Rochester Public Market showing gourds in the front and small pumpkins in the back from October. Might be too late now, but if you find these pumpkins, they grab them up. The smaller “sugar pumpkins” (shown in the rear, not the front) are sweet and flavorful and are the best ones for baking. 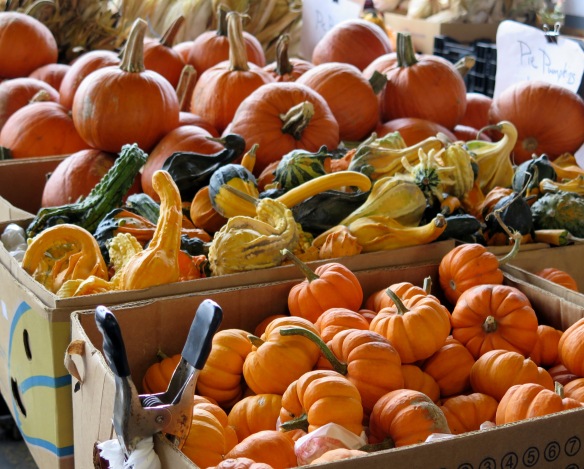 Here are a few suggestions for making the pie. This pie involves several steps and takes some time to prepare. So start early.

Use fresh pumpkin.  Fresh pumpkin makes the pie, according to my mother-in-law. Canned pumpkin can be substituted, if absolutely necessary. However, pumpkin is easy to bake for making fresh pumpkin pulp. Here are instructions from my brother-in-law, Larry, who is quite a creative and inventive cook.

Also, when scraping the seeds out–remove some of the pith, but stop at some point or all the pumpkin meat will be removed. Here is Larry’s pumpkin getting ready for baking.

Larry states that it is important to place the pulp in a colander or sieve to remove as much liquid as possible. I used a small pumpkin that was several weeks old–must have been a dehydrated–as there was no liquid in the pulp. Mine took only 30 minutes to bake. Here is this pumpkin, ready for baking.

Larry adds: “My practice is to USE the strings in the purée. Added color and flavor to the purée. We freeze in 1.25 cup amounts – suitable for pumpkin pies. Also, I froze the liquid drained from the purée. Some as ice cubes, stored in a Ziplok bag, to be pulled out as needed for cooking veggies; and some in pint or quart containers to be used in soups or stews.” 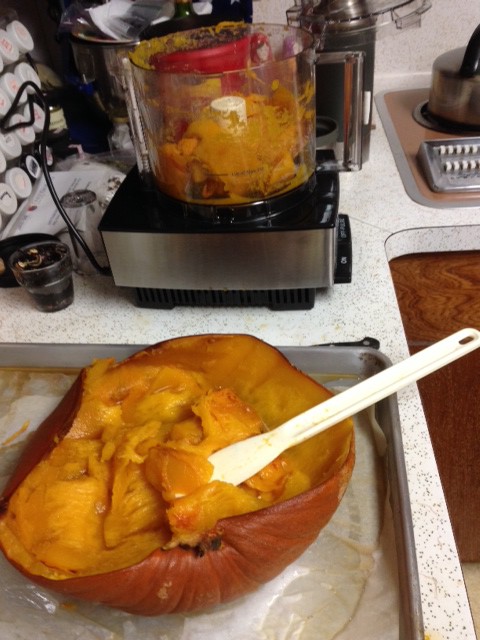 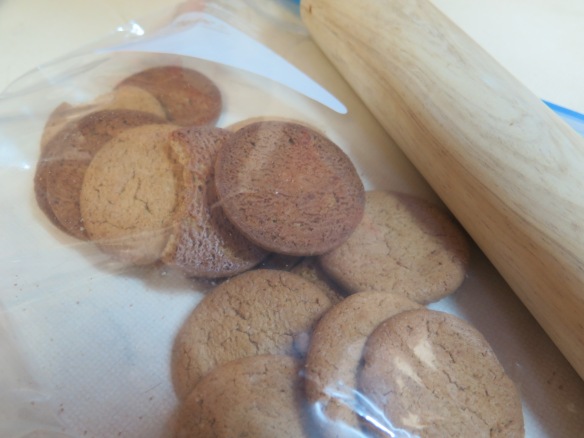 Uncooked egg whites. In a chiffon pie, the eggs are separated, the uncooked egg whites are beaten and added to the cooked and cooled filling. When chiffon pies first became popular, no one had to worry about becoming ill from using uncooked eggs. However, Salmonella outbreaks in the 1980’s changed this. The Centers for Disease Control and Prevention recommends avoiding uncooked or undercooked eggs. What to do? There are several options; one is to use pasteurized eggs. Other options are to substitute powdered meringue in recipe or non-dairy whipped topping. In any case, use your judgement.

Whipped cream topping. It is just fine to use whipped cream as is. I found that the 1 cup called for in the recipe was enough for several pies; next time I will use only 1/3  to 1/2 cup of whipped cream. Molasses is added to the whipped cream and I loved the flavor. Whipping the cream takes some technique. I found this to be the most challenging aspect of making the pie. I used an un-destructible pastry tube fitted with a star tip to pipe the whipped cream onto the pie. 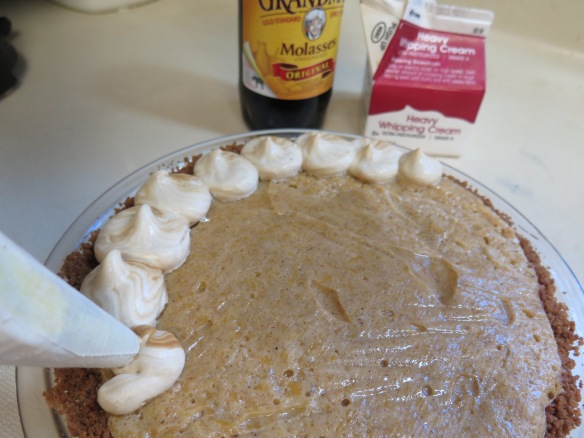 Here’s my mother-in-law’s recipe with modifications.

Bake the pumpkin ahead of time: Cut one small sugar pumpkin in half or quarters lengthwise. Remove seeds and pith. Place cut side down on baking sheet lined with parchment paper. Bake at 350 degrees until a knife easily pierces skin and pulp is soft; 30 minutes for small pumpkin or 60 – 90 minutes for medium sized pumpkin. Puree in food processor or foley food mill until smooth, drain off excess liquid.

I can’t imagine Thanksgiving without this pie. And this holiday is a time to be thankful for all we have. Enjoy!

Tips to Reduce Your Risk of Salmonella from Egg. Centers for Disease Control and Prevention cdc.gov/Features/SalmonellaEggs/ April 25, 2011.