Let’s make Banana Pepper Jelly! Home canning pepper jelly is a new adventure for me — but I’m willing to give it a try. My Community Supported Agricultural (CSA) basket was full of large banana peppers. These peppers are mild, with a distinctive flavor. I don’t often use banana peppers in cooking and hate to throw them away. So making jelly seemed like a good solution. The jelly turned out so well that I made a batch of Hot Jalapeno Pepper Jelly, too.

I’ve home canned many vegetables and fruits–but never peppers. I’m always ready to try something new and rummaged around to find an assortment of hot pepper jelly recipes. All seemed to have something amiss — for example, some recipes added green food color (yuk), some pureed and strained the peppers. The Tabasco Cookbook recipe used only drops of their hot sauce — no peppers at all. Other recipes called for a specific number of peppers without telling the size or measure. I almost gave up; but found that the insert on the box of Sure-Jell Pectin by Kraft had exactly what I needed: — it gave a measure for the peppers by measuring cup volume.

Using the correct proportions of peppers, vinegar and sugar to pectin is critical to get the jelly to taste right and to “set.” The goal is a peppery taste, but not an overpowering one. Pectin is needed in pepper jelly because peppers don’t have enough natural pectin to “set” like other fruit such as apples or peaches. The recipe has alot of sugar but don’t cut back on the quantity or the jelly won’t set properly. Here are two types of commercial pectin. Either one can be used. for this recipe. I used a box of the powdered Sure-Jell — shown on the left.

Banana peppers are mild. So this jelly is not “hot”. But the peppers had a nice bite and the mild flavors blended well in the jelly. The banana peppers in my CSA basket were very large; hence I couldn’t substitute them equally for other peppers — jalapeno peppers, for example. There was an orange banana pepper in the basket, I added it. The recipe also called for a green bell pepper. This made a colorful jelly! 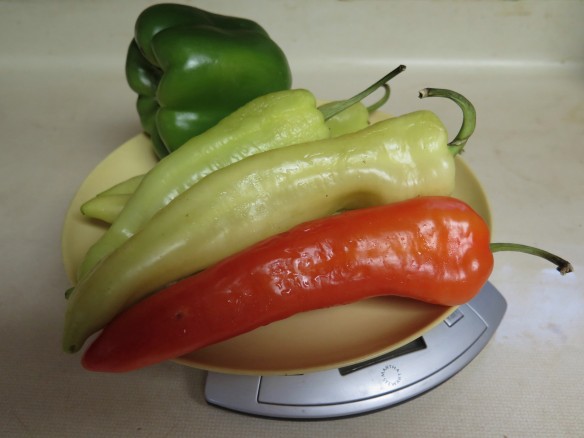 Here we go: Getting the canning process coordinated

Most of the challenge of home canning is getting everything coordinated. It’s important to use clean, sterilized jars. I put the canning jars in my dishwasher on hot rinse and high drying heat to sort of sterilize them — this is going on while I’m getting the jelly ready. Another option is to boil the jars in water for at least 10 minutes.

Use a home canner with a heavy bottom and an insert with holes so that the boiling water circulates under the jars. The jelly will process more evenly and the jars won’t crack. I set this huge pot filled with water on the stove to begin to heat while chopping the peppers and making the jelly. What does this all translate to? …a  hot, humid kitchen! 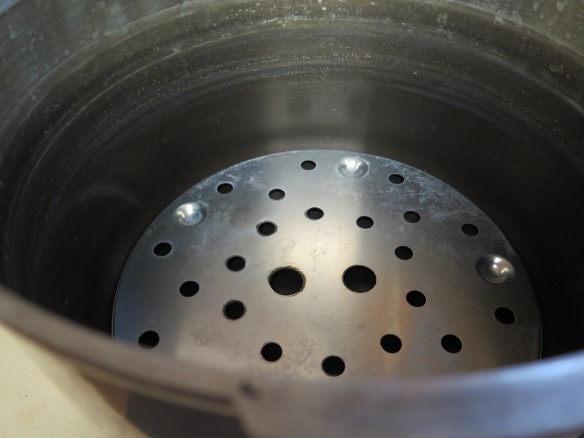 Now there are two burners left. Use one to sterilize the rings and seals and the other to cook the jelly. (The large canner will probably take up 2 burners.)

Then pulverize the peppers in a food processor. I didn’t puree the peppers to a pulp but left a few small pieces. After chopping, the yield was 3-1/2 cups of finely chopped peppers. Just the right amount.

Add the peppers, vinegar and Sure-Jell Pectin to a large pot and bring to a rolling boil. Sir constantly. 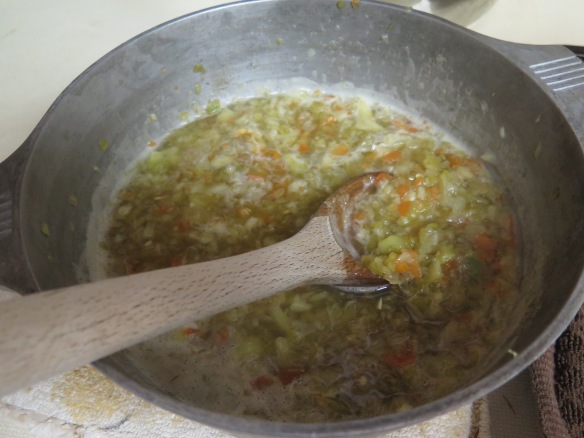 Add the sugar…keep track of how much you are adding–5 cups for this recipe. Return to a rolling boil and cook exactly one minute, stirring constantly. A rolling boil is one that doesn’t stop boiling as you stir the pot.

Ladle the hot jelly into the hot, sterilized jars. The funnel, made specifically for canning, fits exactly in a standard canning jar. Leave 1/4 to 1/2 inch at the top of the jar (or add jelly to the bottom of the funnel). If needed, wipe of the top of the jar so the seal will adhere.

Add the seals and rings. My favorite kitchen gadget — a magnet-devise — lifts the seals and rings out of the boiling water without causing injuries from the steam. Always use new seals — old ones will be bent and won’t seal properly.

Add the jars to the canner filled with water. The water should cover the lids by at least an inch. Return to a rolling boil and process for 10 minutes.

Remove from heat and let cool. The jars should ‘pop” telling you they have properly sealed. Here’s the finished Banana Pepper Jelly. This recipe yields 6 one-cup jars. (My batch actually yielded 7 jars — a little “lagniappe” or extra in Cajun French).

Ideas for Using the Jelly

Serve the jelly with cream cheese and crackers. Spread on toast. Use in a salad dressing. Use as a glaze on chicken, fish or pork. There are many ways to use this zippy jelly!

My Banana Pepper Jelly turned out so well that I decided to make a batch of Hot Jalapeno Pepper Jelly using the recipe on the Sure-Jell box insert. Here are the peppers — jalapeno peppers, green bell peppers and red bell peppers. All the peppers were large — once chopped there was actually enough for two batches of jelly.

Here’s the finished Hot Jalapeno Pepper Jelly. I used both 4 oz jars and 8 oz jars. Now this jelly has some bite! It’s delicious.

This recipe is from the Sure-Jell package insert and is used with permission from Kraft.(“Courtesy of Kraft Food & Family magazine” at www.kraftrecipes.com“). I have reprinted the recipe verbatim. For the Banana Pepper Jelly, I used five very large banana peppers and one bell pepper. This yielded 3-1/2 cups which was the right amount for a batch of jelly (the recipe uses 4 cups chopped peppers).

Home canning can be rather daunting! But it’s not so bad; and your family and friends will be so impressed….