Aunt Gaye has done it again. She provided me with another great recipe idea. This one is for yellow squash pickles. I was tempted to say, “yuck.” But Aunt Gaye’s recipes somehow always work out even when it doesn’t seem plausible. And, as luck would have it, our local produce market was selling four yellow squash for one dollar. I couldn’t pass up the bargain and came home with a large bag full of squash. Then I spent several hours making Aunt Gaye’s yellow squash pickle recipe. And they turned out great! 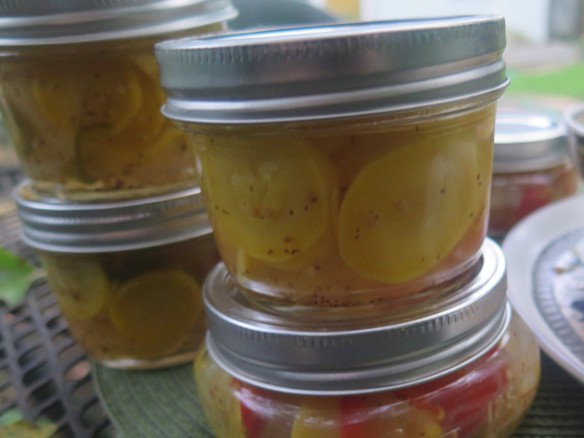 This recipe idea came along at just the right time. I was ready to leave my house to go shopping at an open-air produce market when Aunt Gaye sent an E-mail about a family reunion ending the E-mail by casually saying, “by the way, I have a great recipe for yellow squash pickles if you’d like it.” It seems that Aunt Gaye purchased too many squash in a “farm-to-table” program and so she made squash pickles with her garden purchase.

I thought that this recipe would be one which I would file away in the recipe cabinet — since squash season was finished in Louisiana — when surprise. The produce market had lots of long-neck yellow squash for sale. These particular squash had very, very small seeds — great for making pickles. Since the squash were long and narrow, the pickles were all about the same size. I returned home with eight squash along with other vegetables and fruit.

I was skeptical, but yes, yellow squash do make great pickles — as I found out. This recipe is just about as prefect as you can get. These squash pickles were crunchy — like good cucumber pickles. And they were spicy! The pickles were sweet and had a nice vinegar taste as well.

This variety of squash for sale in the produce market was a long-neck variety. I purchased 8 squash and this turned out to be 3 pounds. I added sweet white onions, as well as a green and red bell pepper for color. This made 7 pints of canned pickles (or 14 – 8  oz jars). If you don’t want to make such a large batch, then cut the recipe in half and purchase only about 1-1/2 lb yellow squash.

Slice everything up. I used a mandoline slicer to cut the squash evenly into 1/8″ slices. This slicer worked better than using a food processor. 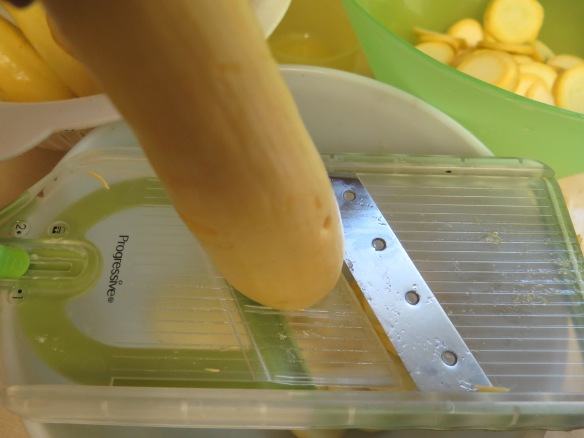 Then place the squash, onions and bell peppers in layers in a very large bowl, adding kosher salt to each layer as you go. 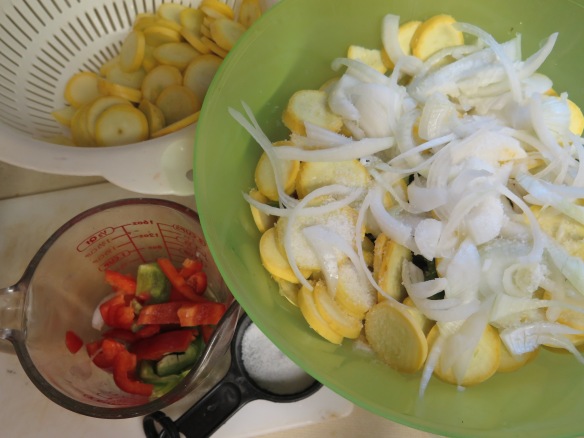 Let them set for an hour. (This is a good time to get the canning jars, lids and seals ready as well as heating water in a large canner.)

When you are ready to can the squash pickles, mix up the brine and heat the ingredients for the brine on the stove. This consisted on white vinegar, sugar, mustard seeds, celery seeds and ground mustard (not the kosher salt). 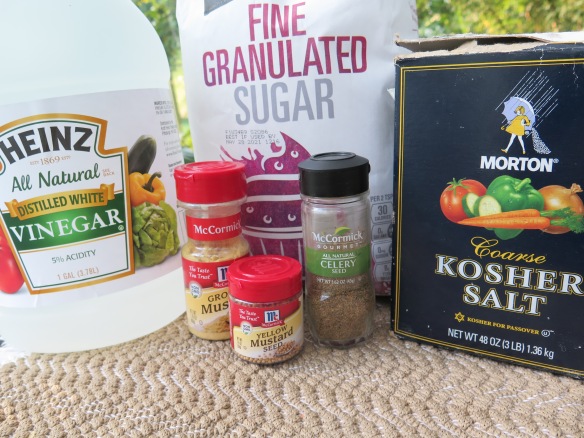 Then fill sterilized canning jars to within 1/2″ of the top with the squash mix and brine. Top with a new sterile seal, add a ring and process in a boiling water canner for 5 minutes. See one of my other posts for how to do this safely. After canning, check to make sure that the seals are patent. If not, refrigerate the pickles.

And you have squash pickles. Use as a condiment with crackers, on a burger or add to a salad. These spicy and zippy pickles are delicious. 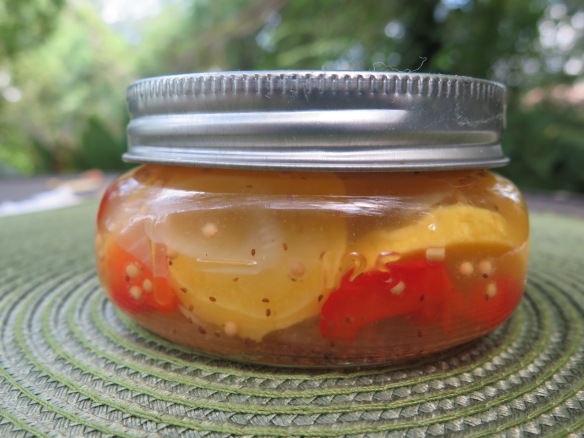