Let’s have some meatless meals this year for a healthy lifestyle. My son introduced us to vegan burgers at a supper meal last summer. I was surprised at how delicious these sandwiches were. Rather than a ground beef burger, they were made with beans, lots of vegetables and seeds for crunch. Everyone went back for second helpings. I came home and made them with a Louisiana twist — using red beans (a common ingredient in the South), Cajun spices and serving them with Louisiana-style Remoulade Sauce.

If your grew up on a diet of “meat and potatoes” like I did, then eating vegetarian meals is a new experience. If vegan burgers don’t appeal to you, think again. These are very tasty. Eating more meatless meals and including beans, nuts and legumes is part of a heart-healthy diet such as the Mediterranean Diet. Who is not in favor of making healthy foods taste good?

My recipe for Vegan Burgers with a Louisiana twist is based on “Brilliant Veggie Burgers” from Chef Jamie Oliver. He is a well known British chef, personality and cookbook author. I became familiar with Oliver when he made an appearance on CBS’s Steve Colbert’s late night talk show giving a cooking demonstration. Oliver used broad beans in his Veggie Burgers recipe. There’s no reason why the ingredients can’t be adapted to include local foods. My son made it with red beans (also known as kidney beans)–common to Louisiana. 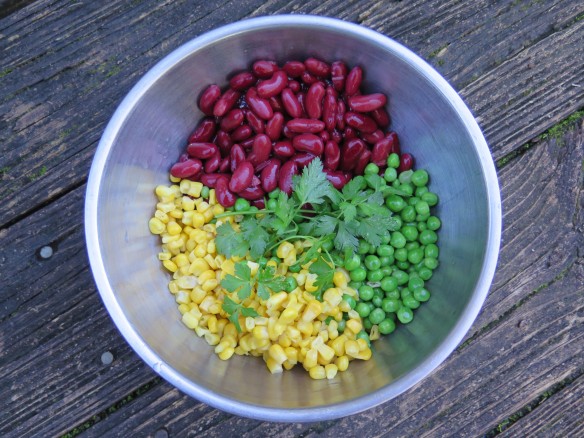 For seasonings, I used cumin, coriander as well as typical Cajun seasonings of garlic, green onions, parsley and a dash of cayenne pepper. Sunflower seeds and sesame seeds add crunch which really made a big difference. These two nuts are high in polyunsaturated fats and also contain lots of vitamins, minerals, and phytochemicals. Another way to add nutrition to the recipe.

To make the vegan burgers, simply blend everything up in a food processor including canned and drained red kidney beans, defrosted frozen peas and corn. Flour (not shown) is the binding. Let the patties freeze several minutes in the freezer and then cook in a skillet in a small amount of oil. After frying the vegan burgers become brown and crispy. 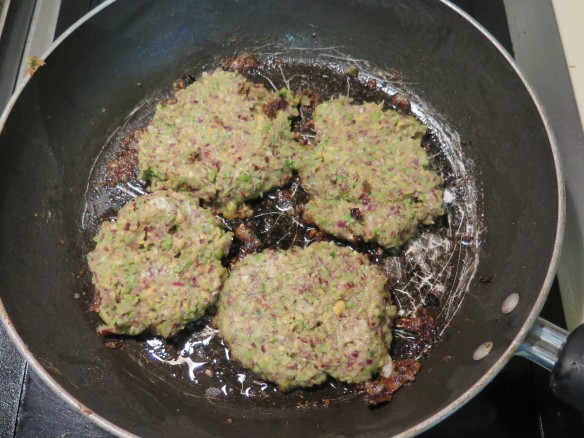 I served the burgers with homemade Louisiana-style Remoulade sauce using the ingredients shown. I used Blue Plate Mayonnaise brand — which originated in the New Orleans area and is a mainstay of the cuisine of the city. Real mayonnaise contains egg yolks–hence this is not a “vegan” sauce. For a vegan version try substituting a commercial sauce such as “Hellmann’s Vegan Spread.”

Serve on a slice of  crusty French-style bread or a roll such as a pistolette roll along with lettuce, tomatoes and Remoulade sauce.

Yum. This is an easy way to include meatless meals in your diet. And how lucky am I to have a son who likes to cook!