This year the Chanukah holiday — “Celebration of Lights” or “Feast of Rededication” — begins on December 13. I’m making Potato Latkes which are small fried potato pancakes traditionally served during this holiday. The holiday observance begins at sundown on the preceding evening; so I’ll serve my Potato Latkes at dinner tonight. My recipe is perhaps a bit unusual; I stumbled on an ingredient which adds “zing” to the pancakes quite by accident.

Chanukah is the eight-day Jewish holiday which falls in November or December depending on the 25th day of the Jewish month of Kislev. The holiday remembers the rededication of the Holy Temple (the Second Temple) in Jerusalem in 164 BCE after it was it was liberated by Judah Maccabee and his followers from the Greek Seleucid Empire rulers and oppressors.

Therefore, it is a tradition to eat fried foods on Chanukah because of the significance of oil to the holiday. Potato Latkes is one such food item. The pancakes are traditionally served with applesauce and sour cream. And they don’t have to be served only during Chanukah, these potato pancakes are good any time of the year.

The game of Dreidel is another Chanukah tradition and I imagine that most Jewish families have a collection of driedels or spinning tops. To play the game, each person begins with a number of coins, beans or M&M’s. One player spins the dreidel. Depending on how the top lands; you either give up or get more coins. The game continues until someone succeeds in getting all the coins. It is a fun game to play provided that you use a top that actually spins.

According to tradition, it was illegal to study the Torah in the temple during the time of Antiochus’ oppression. The youth would do their schooling until a soldier was in sight. Then they would conceal their books and play gambling games with a top until the soldier passed. 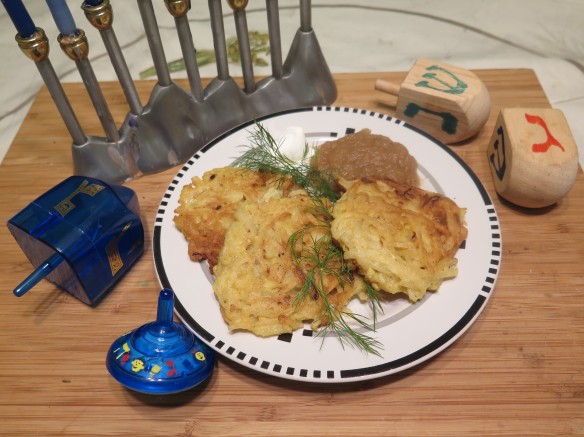 My potato latke recipe has some “zing” quite by chance which averted a disaster. I had invited friends over for supper. When it was time to fry the latkes, I reached up into the cabinet for oil and realized it was almost all gone. Ouch. You cannot make latkes without oil. In the back of the cabinet I spied some oil with chili. The resulting latkes were the best I’ve ever made. They certainly had zing.

Here are the ingredients for my latkes: russet potatoes, a small onion, eggs & flour, and seasonings of salt and pepper. The “zing” comes from either adding Tabasco sauce to the mix or adding a small amount of chili oil to the frying oil. I tried both methods to add “zing” and decided that both worked well. 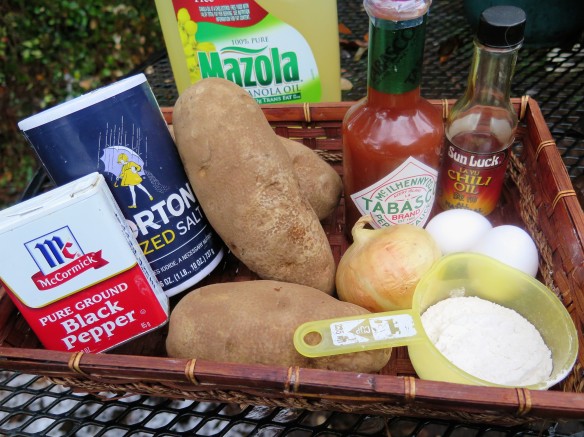 To make the latkes, first shred the potatoes. These were huge Russet potatoes; you need about 1-1/2 pounds or 2 to 3 of these potatoes. This was about 6 cups of shredded potatoes and I needed 3 eggs for this amount. To speed things up, I used a food processor to shred the potatoes–this resulted in a course texture. For finer pancakes, shred by hand which is the traditional way to make latkes. Shred the onion, too. 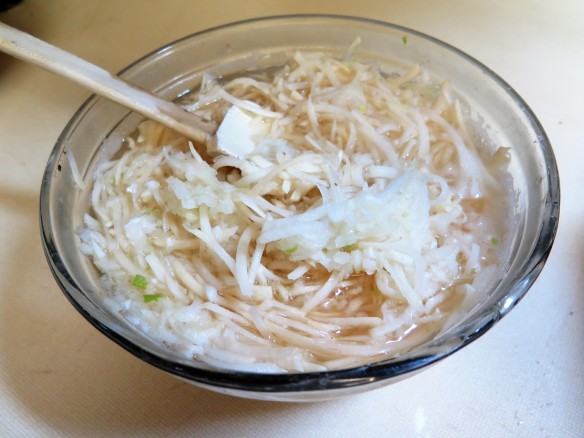 Then, when you are ready to fry the latkes, drain and press down on the potatoes to squeeze out all the water. Mix with the beaten eggs, flour and seasonings including Tabasco sauce.

To fry the latkes, I heated oil in a heavy skillet — just like the previous post of Fried Green Tomatoes. Fry in batches, about 1/4 cup or a cook spoon at a time. 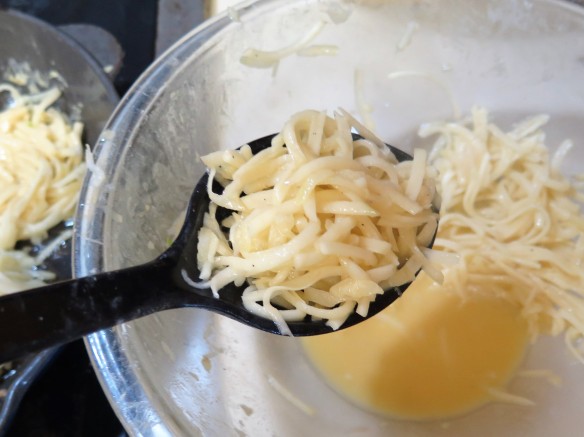 Fry on medium high heat, I set my stove at “7” and cooked over a several minute period. Turn over and fry the other side. Add more oil as needed to fry additional batches. After this photo, I improved upon the technique of gathering the shreds of potatoes to fit inside the spoon making a nicer pancake.

This recipe made 16 to 18 latkes. Drain the latkes on a paper towel and keep warm in an oven turned on low heat (200 degrees) until ready to serve.

Latkes are traditionally served with sour cream and applesauce. Here’s some applesauce from my blog post recipe of several weeks ago. I garnished the platter with dill from my garden.

What about the chili oil? I prefer adding a few drops of Tabasco sauce to the pancake mix — stir well to combine — rather they frying in chili oil. The oriental chili oil that I had available this time was very potent. You only need a teaspoon added to each batch along with the cooking oil to add “zing.” Don’t over do things on the Tabasco sauce or chili oil — a little goes a long way.

These are delicious latkes — crisp and flavorful. Easy to eat too many.!

*May omit Tabasco sauce and add 1 tsp oriental chili oil to the frying oil when frying each latke batch. 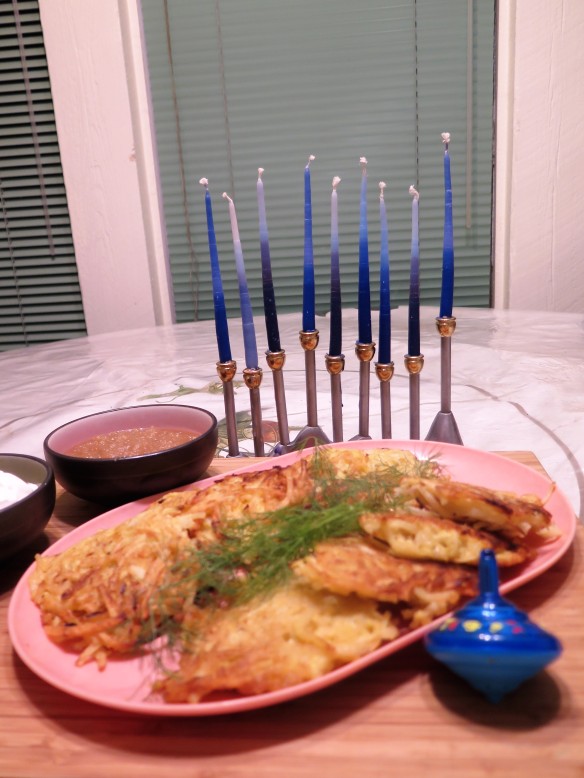 1 thought on “Potato Latkes with Zing for Chanukah”