Everybody raves about Aunt Gaye’s Eggplant Caponata. It’s another great recipe for eggplant which includes lots of garden fresh vegetables. These are all chopped up and baked in a simple red wine vinegar and olive oil marinade. The flavors meld together in just the right blend. It’s difficult to stop eating this appetizer. 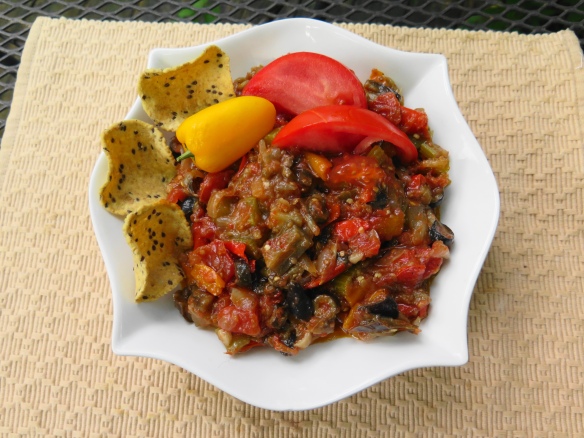 Aunt Gaye has shared some wonderful recipes over the years. She loves to cook and share her recipes. At one time had her own catering business. I always perk up when she sends a recipe my way. I’d never cooked caponata until I tried Aunt Gaye’s recipe. No need to go further. This is a truly delightful way to serve eggplant.

Caponata is a Sicilian eggplant dish, with eggplant, celery, capers and other vegetables served in a sweet and sour sauce. Aunt Gaye’s recipe adds olives, too, and she often includes pine nuts. The recipe calls for sweet red peppers, I used a combination of yellow, orange and red peppers. The caponata can be used as a side dish for fish recipes, an appetizer or as a main course with seafood added.

The recipe is really a simple one. The main challenge is chopping up all the vegetables into bite size pieces. Not too small, or the cooked vegetables are hard to scoop up.

The eggplant, too, is chopped up and set in kosher salt. After 30-60 minutes, the eggplant is patted dry with paper towels.

All the vegetables are sauteed in olive oil to partially cook them. Then the dish is baked in the oven with a sweet and sour sauce made of sugar, red wine vinegar, olive oil and a little pepper. This blend of sugar and vinegar is just right– not to sweet or sour.

I asked Aunt Gaye about the origins of the recipe. She immediately referred to a cookbook, “Better than Store-Bought”, by Helen Witty and Elizabeth Schneider Colchie. It was published in 1979 by Harper and Row, Publishers. The book is no longer in print but it can still be purchased on Amazon and other internet book stores. 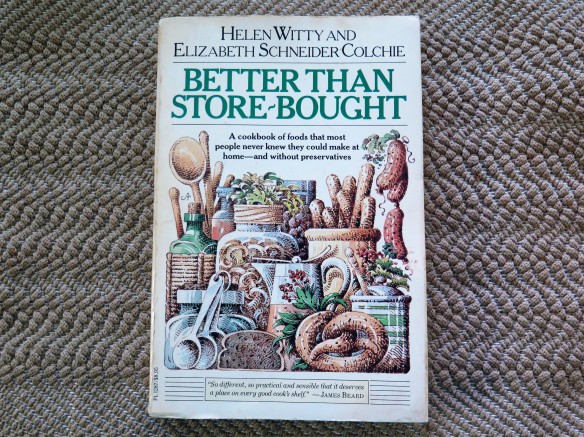 These two food writers became intrigued with the idea of making homemade products to imitate or duplicate ones produced for mass distribution in stores. Their curiosity lead to this book. They were motivated by finding ways to prepare “good foods,” less expensive ones, products without chemicals or preservatives, ones which are not easily available or just was plain curiosity. It’s an eclectic collection of foods – ranging from homemade grape juice to pickled okra to shortbread cookies. It is fun to browse through the pages of this cookbook.

When I contacted Harper & Row, Publishers, to get permission to reproduce the recipes, the response was that the rights to this 1979 book had reverted back to the authors. My experience with trying to contacting individuals or an estate is that it leads to a dead end.  And so I am reproducing the recipe as written; hopefully, with the author’s approval. It is a delightful recipe.

From: Better than Store-Bought by Helen Witty and Elizabeth Schneider Colchie and published by Harper & Row, Publishers © 1979. 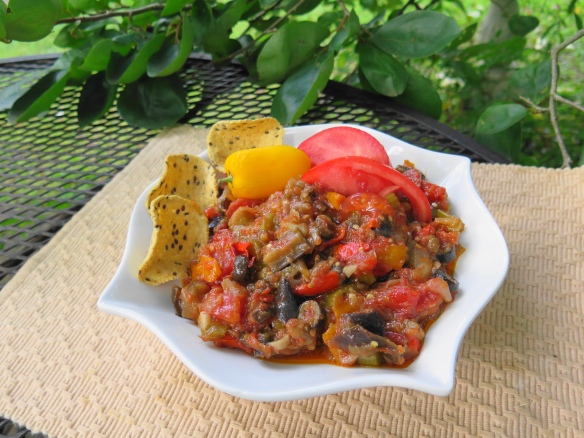 I serve the caponata appetizer with crackers or dipping chips. Enjoy it!