I love to get an order of tabbouleh when eating at Middle Eastern restaurants. Pasha, a Turkish and Mediterranean restaurant close to Rice University, is the favorite choice when we visit relatives in Houston. Their tabbouleh is outstanding. I’ve never cooked it myself but decided to give a new recipe a try. 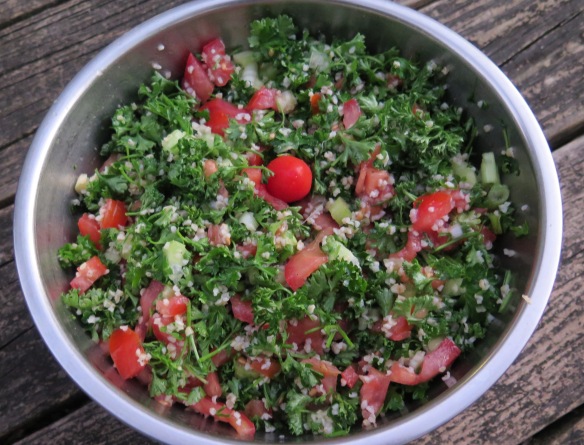 Tabbouleh is parsley salad. The main ingredients are finely minced parsley and bulgur.
It contains other ingredients, too, such as tomatoes, onions, mint, garlic. The dressing is lemon juice, olive oil and seasonings. The tabbouleh from Pasha’s included cucumbers. The tomatoes and cucumbers were finely diced; so tiny that is was difficult to tell what they were in the salad. Here are the ingredients for my tabbouleh. 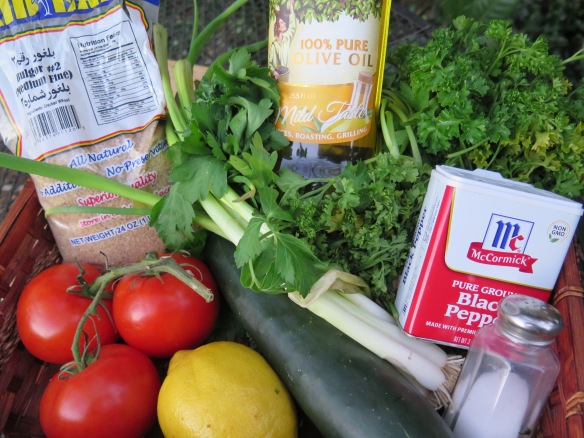 Since I didn’t know how to make tabbouleh, I headed out to my favorite international grocery market, Pita Boy. It has a wide selection of international foods and the staff is always willing to explain which ingredient to purchase depending on what I’m making. Their Facebook page says Pita Boy was established as an import store in 1996. It also says they closed January 31. I haven’t visited since this date; don’t know if it’s true–but it is sad to see a family market close.

At my last visit, I purchased bulgur and an expensive Lebanese cookbook which was highly recommended. Apparently everything was 50% off soon after I left; guess I paid the price.

I had never cooked with bulgur. According to my newly purchased Lebanese cookbook, it is “crushed wheat which has been boiled, dried in the sun and then ground.” The cookbook cautions not to substitute ordinary cracked wheat. The clerk in the store explained that there are different sieve sizes of bulgur — I needed a #2 size or medium size.

And bulgur does swell up when soaked for an hour or so.

Health Benefits of Bulgur and Parsley

Bulgur has a chewy, nutty taste. It is a healthy whole wheat containing the endosperm, germ and bran. The nutritional benefits are that it is high in fiber and contains protein as well as B-complex vitamins, iron and trace minerals especially potassium, manganese and zinc. Since bulgur is already cooked, it just needs to be soaked before adding it to the salad.

Parsley is healthy, too. It it very high in Vitamin A or carotene. In a college cooking cuisine class, the instructor stated, “you should always garnish the plates with parsley; then instruct your guests to eat the parsley because it is so healthy.” I always thought that was a little weird, but it was true.

The recipe contains only a few common ingredients. It is a very simple salad to make. The Lebanese recipe makes a large batch, using 5 cups of finely chopped parsley. This is 10 ounces or 3 bunches of parsley, as purchased. It would be easy to half the quantities in the recipe. 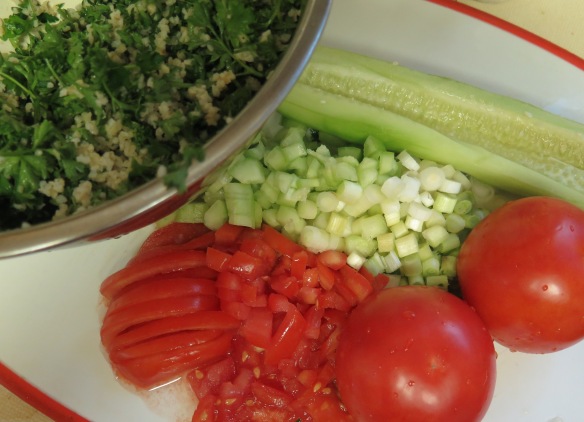 Add the seasonings, which in my case was salt and pepper, lemon juice and olive oil. Very easy to make! A healthy salad.