“Lime Fascination Salad with Walnuts” is a soothing pineapple and jello salad for the the hot summer months. Bonnie made a small recipe of the “Carrot Salad with Golden Raisins & Pineapple” which I featured in April. She had crushed pineapple left over and asked for suggestions to use it. Of course, I like to think of ideas and remembered that we ate lots of jello salads with fruit when growing up. One of my favorites was lime jello with pineapple. It also contained cottage cheese and heavy whipping cream. I decided to update the recipe for a more healthy version and substituted Greek yogurt in the recipe. The fruit salad is just as delicious as the ones I remember from my youth! 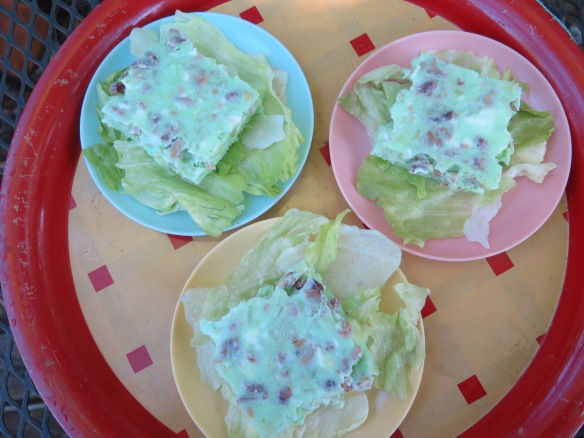 END_OF_DOCUMENT_TOKEN_TO_BE_REPLACED

If you have a generous supply of cherry tomatoes and like croutons, this salad is for you. It is an adaptation of a dish we ate at a quaint sidewalk cafe while visiting Hamburg, Germany, two years ago in August (well before the Covid-19 virus). Recently, I found a similar recipe on a German food blog, “Mediterraner Brotsaladmit Tomate-Mozzarella,” which roughly translates to “Mediterranean bread salad with tomato mozzarella.” Who else would think of naming a salad, “bread salad”? I am renaming the salad with emphasis on the tomatoes. It is a great way to jazz up cherry tomatoes by adding in flavorful croutons (with Mediterranean-type herbs) made with New Orleans-style French bread. Here is my recipe variation.

END_OF_DOCUMENT_TOKEN_TO_BE_REPLACED

I’m always looking for ways to use the endless supply of cucumbers growing in my garden. This recipe is just right on a hot summer day. It combines slices of cucumbers and white onions with a sour cream dressing. I added in just a little dried dill and fresh mint from my garden. And finally, a way to use my garden mint. For a variation, I made the recipe using non-fat plain yogurt for a healthy alternative.

Mint grows very well in a Louisiana garden; I have both peppermint and spearmint. In fact, mint is sort of like a weed and grows without any attention. The plants spread along runners and can quickly overtake a garden bed and everything in its way. On the positive side, mint grows best in a shady area of the garden–and I have several shady gardens. It is nice to step outside and pick a few aromatic leaves to add to a half-gallon of ice tea.

I don’t run across many recipes which use mint as an ingredient — cucumbers and sour cream is a good one and the mint adds a surprising and refreshing flavor. This is some of the spearmint growing in my garden.

Cucumbers also grow well in Louisiana. I planted these in early April and the began to get ripe cucumbers in May. (The cucumbers are the plants in the foreground of this photo.) I always get carried away and purchase too many seedling plants — but I want to make sure I have some to harvest. Most of these cucumbers became pickles. And we pick a few every night for salads.

This recipe is very easy to make. Here are the ingredients for “Cool Cucumbers with Sour Cream & Mint.” I like to use smaller cucumbers, if possible, in this salad. And an onion? I like to add a small, sweet white onion. Why? Well, I love onions and this adds a flavorful contrast to the cucumbers.

To make the recipe, slice the cucumbers and onion. A mandoline slicer makes this task much easier and the cucumbers come out evenly sliced. I especially like the hand holder on the slicer — it prevents your fingers from getting nicked, too. How many times has that happened?

Should you peel the cucumbers? Cucumbers purchased at a grocery store are sometimes waxed for longer preservation. These should definitely be pared (or peeled). And for cucumbers from a garden or farmer’s market, peeling them is optional. Towards the end of the season when the cucumbers are larger with many seeds, I prefer to peel them and hollow out the seeds. I find that paring also helps remove the bitter taste which is sometimes found with cucumbers late in the season which were subjected to dry growing conditions.

I made a tasty variation to this salad using non-fat plain yogurt replacing the sour cream. I added a little olive oil to the dressing. It makes a very healthy and low-fat alternative and tasted just as good. Couldn’t tell the difference.

Here’s “Cool Cucumbers with Sour Cream & Mint.” This is a flavorful way to use cucumbers. In the summer months, when cucumbers are easily found in farmers markets and grocery stores, its a good time to use fresh vegetables.

Cool Cucumbers with Sour Cream & Mint with a Yogurt Variation

My backyard garden is doing great this year. The star performers are my zucchini plants. I have an abundance of this vegetable and I’ve tried out a number of recipes. This quick and easy summer salsa is a tasty way to serve zucchini. No cooking is involved — just slice and dice, combine the ingredients and marinate. The raw zucchini has a mild flavor and blends well in this dish. It’s a very healthy recipe and good way to include vegetables in meals.

END_OF_DOCUMENT_TOKEN_TO_BE_REPLACED

A recent survey showed that carrots are our country’s third most popular vegetable after corn and potatoes. (I wonder if this could refer to raw carrots rather than cooked carrots?) I do remember that carrot sticks were packed in practically every brown bag lunch that I ever ate when growing up. I can’t say that I loved the carrots, but I did tolerate them. Recently, Marie made a delightful carrot salad which is a delicious way to serve this vegetable. Marie’s recipe combines carrots with golden raisins and pineapple for a flavorful combination. And I used pre-shredded carrots to make this an easy “one-bowl” recipe. So while we are cookin’ at home, here is an easy variation of Marie’s recipe.

END_OF_DOCUMENT_TOKEN_TO_BE_REPLACED

While we are “cookin’ in the kitchen” and staying home rather than eating out in restaurants, let’s make coleslaw. This vegetable salad is very nutritious and we all need to try to boost the Vitamin A and C content of our meals to keep up immune resistance. Plus, my husband declares that this is the best coleslaw that he has eaten. We decided that this is due to a “secret ingredient.” The recipe has a couple of twists and is easy to make in one bowl without any fuss. 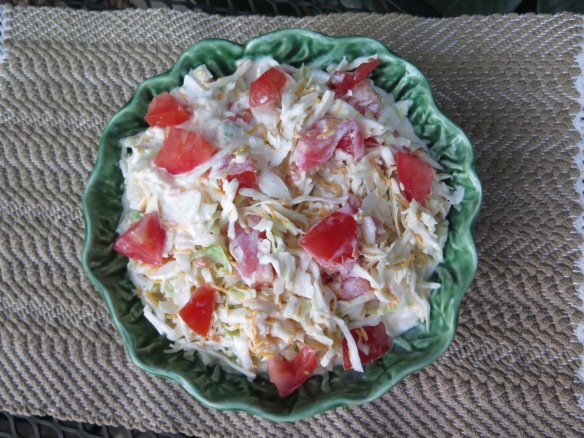 END_OF_DOCUMENT_TOKEN_TO_BE_REPLACED

Let’s try to make a Chicken Shawarma-style lunch bowl. I’d like to find a chicken shawarma recipe which is close to the real thing. For lunch, we love to eat at the nearby Greek and Lebanese Serop’s Express Cafe with a cafeteria-style lunch line. The chicken shawarma plate or bowl with chicken, rice, salad and feta cheese is my favorite. I could eat at this restaurant every day for lunch. (For the quick service and tasty food!)

END_OF_DOCUMENT_TOKEN_TO_BE_REPLACED

I like to support local farmers whenever possible and to purchase their produce. While driving through the countryside about an hour north of here last week, I saw a sign pointing to the Naquin Family Tomato Farm. Wow, I love garden-ripened tomatoes in the summertime. I took a quick detour and stopped in at the roadside packing building. I left with a large bag of vine ripened Celebrity tomatoes. Now to savor the tomatoes and make a few of my favorite dishes such as ripe tomatoes and Tuna Fish Salad. 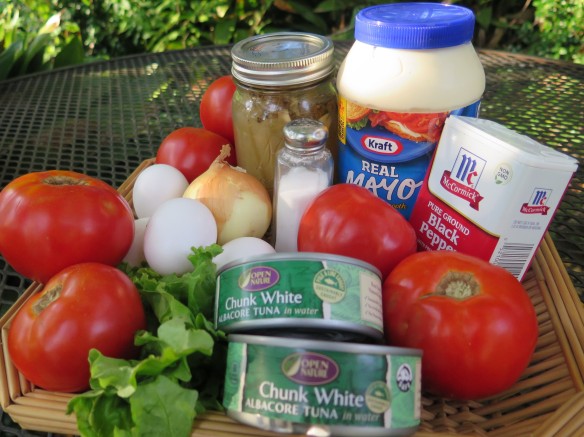 END_OF_DOCUMENT_TOKEN_TO_BE_REPLACED

I love to get an order of tabbouleh when eating at Middle Eastern restaurants. Pasha, a Turkish and Mediterranean restaurant close to Rice University, is the favorite choice when we visit relatives in Houston. Their tabbouleh is outstanding. I’ve never cooked it myself but decided to give a new recipe a try.

END_OF_DOCUMENT_TOKEN_TO_BE_REPLACED

Here’s another recipe for Louisiana crawfish — Crawfish Pasta Salad. This is a different take on using crawfish. Mixed in with pasta, the recipe is really quite tasty. The recipe is one I’ve kept for years — never throw away a good recipe.

END_OF_DOCUMENT_TOKEN_TO_BE_REPLACED

Let’s Get Started with Home Canning and Preserving