Back in the 1980’s, I was given a copy of the “More-with-Less Cookbook”. As I read  the cookbook’s preface, a light-bulb flashed. It was my introduction to eating responsibly to conserve our planet’s limited food resources. And years later, the message is still relevant. The recipes are good ones, too. I became curious to learn if other folks use the cookbook and discovered that this well-traveled cookbook is the “go to” recipe book for many families. A good cookbook never hides on the shelf. 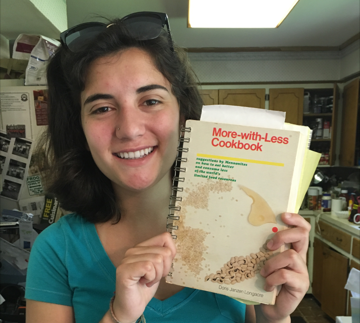 This cookbook has sold over 600,000 copies with users scattered across the country. Not bad for a cookbook. It is the “go to cookbook” for many families and has been passed by along by mothers and fathers to their children–the next generation. A 40th anniversary edition release is planned for September 27, 2016 (personal communication.) 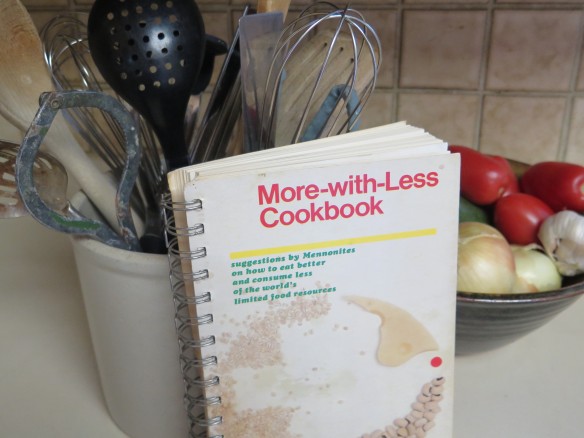 The cookbook was published in the 1976 by the Mennonite Central Committee. This very pro-active protestant domination is greatly concerned with issues of world peace and justice. In the 1970’s they addressed the huge issue of world hunger and looked for ways their members could contribute. The appeal was made for members to eat responsibility and reduce their food consumption (“eat and spend less”) by 10 percent to help conserve our planet’s limited food resources.

The call was sent out to members to submit recipes which followed the theme of “eating responsibility.” Recipes and stories poured in. The recipes and introduction were edited by Doris Janzen Longacre resulting in a well-planned cookbook which has become the standard in many homes reaching far beyond the Mennonite denomination.

What is “eating responsibly?”  Much of the argument deals with consuming a plant based diet and limiting intake of animal products. Increasing intake of grains, cereals, beans, vegetables and fruit and decreasing intake of meat and poultry helps conserve our plant’s food resources. Incidentally, this follows current recommendations for consuming a healthy diet. It was my first introduction to this concept, making a lasting impression on me.  Not that I’m always successful, but it remains a goal. The idea of limiting animal products–which are higher on the food chain–remains relevant today.

Who uses the cookbook?

Searching for granola and zucchini recipes lead me to this cookbook and began my curiosity. My daughter was home to Louisiana from college on her summer break. On a lark, I asked her to text a Mennonite college classmate who lives in Virginia to see if he had heard of the cookbook — and the answer was “of course, we use it at home all the time.”

Hum, who else uses the cookbook? My mother apparently gave copies to all my brothers, too. I asked them to see if they could locate their copies–a challenge. Surprisingly, they could.

For interest, I asked a Mennonite friend to query her Facebook list to see if her contacts use the cookbook. What recipes do you like? Where did you get the cookbook?

I found users from the East Coast: Boston, MA, Harrisonburg, VA, Bridgewater, VA, State College PA, and Lancaster County PA;. to the Heartland: Elkhart IN, Fort Wayne IN, Indianapolis IN, Pandora OH;  to the South: Baton Rouge, LA;  to the West Coast: Los Angeles, LA and San Diego, LA. Here are their responses with photos: 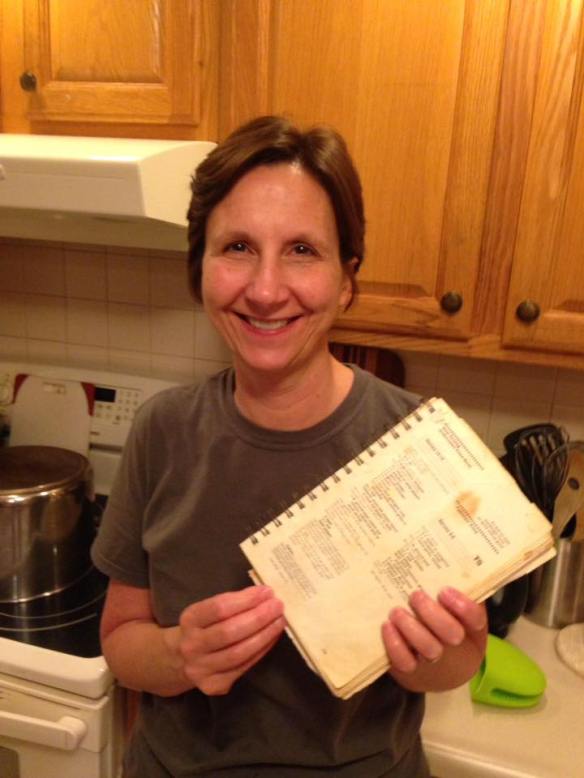 Mary Evelyn: I am on my second copy of the original More With Less. My first copy sort of fell apart. My most-used recipes are for oatmeal bread, split pea soup, honey baked chicken, Pakistani Kima. Our kids grew up on wheat germ pancakes and we used to take wheat germ balls to carry ins until we stopped because people didn’t know what they were.

I made Pakistani Kima for Easter one year and several of Nathan’s friends from Goshen College in Indiana came up for lunch. I apologized that it was not a typical Easter meal and maybe one they were not used to. Two of the girls looked at it and said “Pakistani Kima! We love it” Guess their moms were of the More with Less generation also.

Carol Moser Wenger: Mine was a wedding gift marked with favorites of the giver! 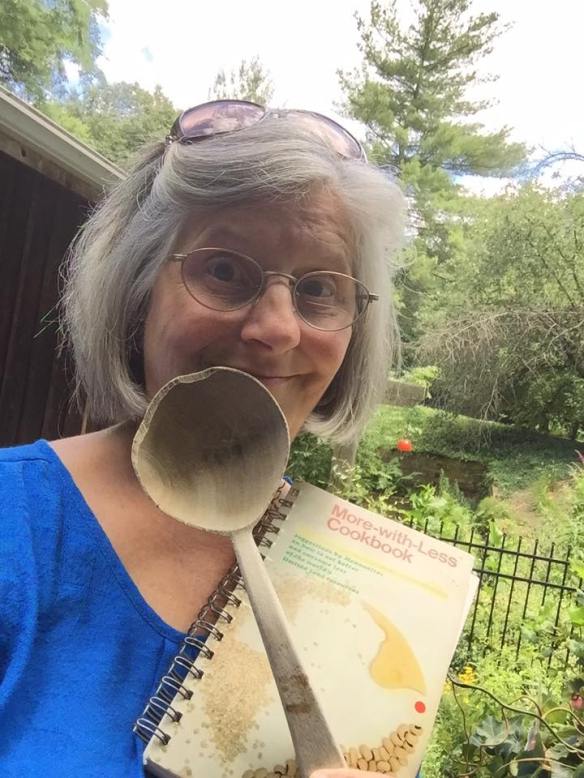 My kids have always asked for curried lentils & rice for birthday dinners, lol! Most of the recipes need to be “kicked up a notch” to restore them to their authentic ethnic origins, but the basics are foolproof. (Extending the Table tends to be more authentic.)  Be sure you use red lentils, &/or toor dal & Chana dal.

Sarah Sprunger: I’m on my 2nd copy! The paperback one from college was falling apart / I like the harder cover that came out a few years ago and goes with “Simply in Season” and “Extending the Table.”

Loren Heisey: I do not remember when I got it but my copy was from the 24th printing, October 1980 which made 355,000 copies in print.One of my favorites is the Minute Minestrone soup on page 210.

I am always on the lookout for quick and easy recipes, and the TS the cookbook uses makes these easy to spot. I use this recipe as a starting point and add variations of things to give a slightly different soup each time. These include vegetables like carrots, celery, or zucchini which are stir fried a few minutes before adding. Also sometimes I add frozen peas or green beans and occasionally leftover cooked rice or pasta noodles.

My original goal of getting this cookbook off the shelf was to locate a recipe similar to my mother’s granola recipe. It’s been difficult to take a photo of the granola; my husband loves it and the granola disappears quickly. I’ll keep trying. I also cooked some of the zucchini recipes. The recipes for zucchini and egg combinations sounded interesting — and were delicious. Here’s the Zucchini Egg Foo Yung, used with permission from the Herald Press.

What fun it was hearing the favorite recipes and stories of other cookbook users. And the lessons written in 1976 are still relevant today. Look for the new release of “More-With-Less Cookbook” on September 27, 2016. Here’s my daughter with my copy.