There’s brisket and then there’s Fran’s Brisket. When prepared properly, nothing is more flavorful and tender than brisket. This recipe is braised slowly in the oven with lots of onions and a simple marinade of burgundy wine. Delicious! There are many good brisket recipes; this one has evolved as it moved from cook to cook. Here’s the story.

Brisket is very flavorful but a rather tough cut of meat. It comes from the front quarter of a steer where there is lots of movement of the animal. So brisket is filled with connective tissue and not much fat in the meat; although there is a thick coat of fat on the outside of the cut. With moist heat and slow cooking the connective tissue softens and the meat tenderizes. The flavors develop as the meat cooks and the result is a delicious meal.

There are many recipes for brisket and ingredients which can enhance the flavor of brisket. I like a teriyaki marinade, the spices of chili powder and cumin complement brisket well and a sweet barbecue sauce brings out the brisket flavor. Pickled corn beef usually comes from this cut of meat. Of course, there is Texas-style smoked brisket but this is another technique and story. In this recipe red burgundy wine flavors the meat as it cooks. And the recipe has lots and lots of onions. So if you are an onion lover, the braised onions are a treat.

This recipe began in Boston with Fran Bernstein Waterman (a distant relation to the composer). My sister-in-law met her future husband while attending college at Tulane in New Orleans years ago. She moved to Boston while he was in law school. Maureen met Fran the first summer when she went to visit the family. Maureen says:

Fran always cooked lovely, tasty meals.  I probably had her wonderful brisket that first summer I met Mark’s parents.  Fran always served a salad first.  The salad would be in a bowl on the plate where each of us sat to eat.  After that, Fran always served everyone by filling each plate and passing it down to each person,  We served ourselves for seconds. Sunday’s dinners were always breakfast. 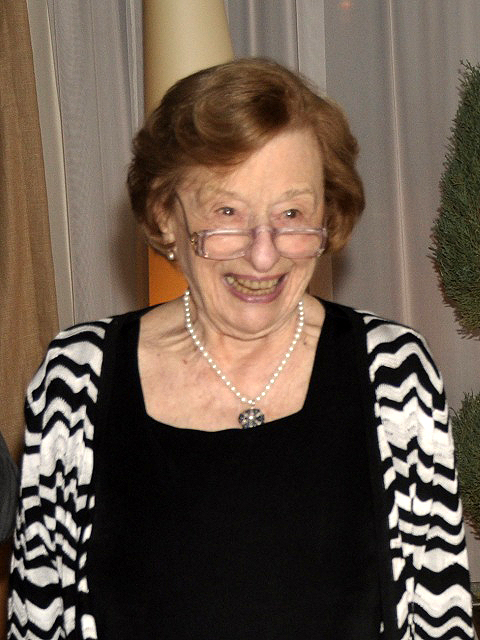 Fran’s recipe is very simple with just 3 ingredients: the brisket, 2 cups burgundy wine and white or yellow onions. It is surprising that, although the recipe is uncomplicated, it turns out delicious. Here are the instructions:

Here are Maureen’s sliced onions. Be generous with the onions–you can’t have too many. They cook down during the cooking process.

To have a brisket recipe turn out well, I have several tips. Following them will help with tender and flavorful meat.

Through the years, Fran’s brisket recipe was passed to Maureen’s sister. Vicki brought the brisket most holiday family gatherings including Rosh Hashanah, Thanksgiving and Pesach meals. These dinners were where I learned about the recipe.

To adapt the recipe for Passover, Vicki cooked the brisket in sweet Manischewitz wine. She added seasonings — salt, pepper and granulated garlic powder, coated the brisket with matzo meal and seared the meat in Crisco shortening first. Also included in her recipe is basting the meat every 30 minutes. (That’s alot of work but again is delicious!) And look, Vicki increased the onions from 6 to 10. Here’s Vicki’s recipe.

Here’s my take on the recipe. Essentially, I took Vicki’s recipe and fine-tuned the ingredients while added some steps that Vicki relayed to me over the phone. Still simple ingredients, nothing fancy. I liked the sweetness that the Manischewitz wine added to the recipe. Because I didn’t have this wine in my kitchen when I was preparing the recipe, I used some Port wine and added brown sugar to the meat rub. Here are my ingredients.

The butcher at Maxwell’s Market cut the full brisket in half for me and I froze the other half. You can see how well-trimmed this cut is. Not much fat on the brisket. The onions which I purchased at Maxwell’s Market were large ones; each one weighed one pound. I used 3 onions but easily could have increased the amount.

Vicki pokes holes in the meat and gently pushes the granulated garlic and spice rub into the meat. So I tried this.

Here is my spice rub added to meat. I used Kosher salt with is a course salt, black pepper, granulated garlic powder and added just a little brown sugar for sweetness.

This piece of meat was too large for my skillet, so I seared it in several sections.

I used a large roasting pan for braising the brisket in the oven and lined it with most of the onion slices. I see that Maureen’s onions are thicker – next time I’ll adjust.

And cover with aluminum foil, tightly. A Dutch oven with lid definitely would be easier considering Vicki’s recipe calls for basting every half hour.

Half way through the cooking process, add more wine. I found some sweet Port wine on my shelf which I used. At this point, Maureen turns her brisket over and re-arranges the onions. I decided to let everything stay where it was. 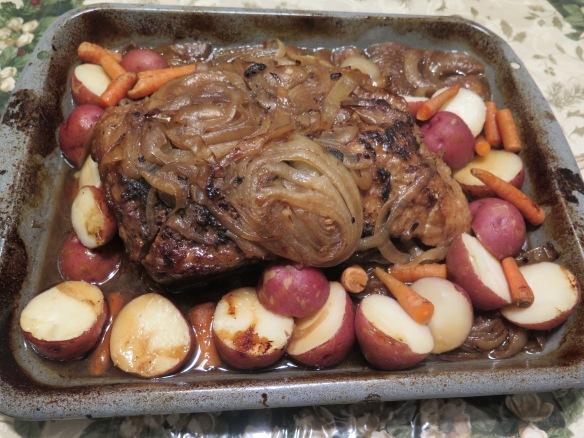 Enjoy Braised Brisket with Onions at any holiday meal and Vicki’s variation for Passover.