Hot soup and sandwich on a cold winter day makes a heart-warming, soothing meal. Savory Vegetable Beef Soup reminds me of a soup served at a small restaurant, Ludwig’s Center Stage Cafe, in upstate New York.The deli shoppe at the prestigious Eastman School of Music in Rochester serves sandwiches and wraps named after composers and musical compositions. Their vegetable beef soup was full of healthy vegetables and beans.

It has been over a year since we visited the Eastman School of Music campus and the restaurant, so I’m making the soup from recall. The idea is to cook a savory soup full of hearty vegetables, beans, herbs and beef. It’s a healthy, low fat soup. My version is quick and easy to make–a welcome change when cooking soups. This soup is the first thing we reach for when looking for a quick frozen meal to defrost and heat up in a hurry.

The flavors of this soup blend together well and the soup is delicious. Not to brag, but it is a very tasty soup. To speed up the preparation time, I used canned tomatoes, canned kidney beans and ground beef rather than stew meat (which can take several hours to cook) and dried beans. There are plenty of fresh vegetables, too, in the soup–these cook quickly.

I have made the recipe for the soup several times with variations. As long as the basic proportions of broth, ground meat and tomatoes are kept constant, the vegetables can be varied depending on what is available. This time I doubled the ingredients filling a 6-quart (5.7 liter) cast iron pot to the rim. There were plenty of leftovers to freeze.

Use a large soup pot or 6-quart cast iron pot for this recipe.

Saute the onions until transparent and bell pepper to reduce the “raw taste”. Add the garlic for a minute or two.

Transfer these to another bowl and brown the ground meat in the same cast iron pot. Drain off any excess liquid or fat. Return the onions and bell peppers and add the vegetables and drained kidney beans to the ground meat.

Add the canned tomatoes with the juice and the seasonings. 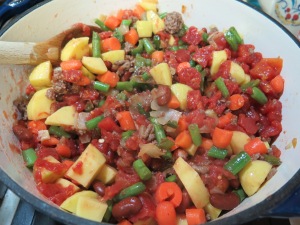 Add the chicken broth and simmer until the vegetables are tender, about 15 minutes. If desired, add additional water as this makes a very thick soup–almost a stew. But there wasn’t much room left in the pot! 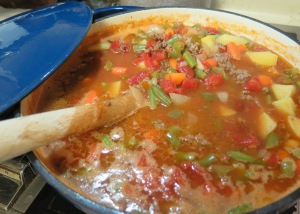 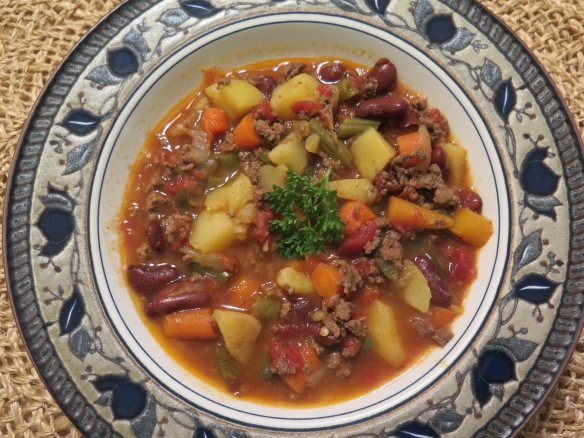 I made this soup several times with variations. The last batch makes a huge recipe yielding 12 cups of soup. It is easy to halve the recipe using only 1 pound ground meat, for example, rather than 2 pounds if you want a smaller batch. Most of the preparation time is peeling and dicing the vegetables and potatoes.

Enjoy this hearty and savory soup on a cold winter day!