My culinary tribute to Mardi Gras this year is Grillades and Grits. This is the quintessential New Orleans brunch menu, especially during Mardi Gras carnival season. Here’s a little about the tradition and the dish. 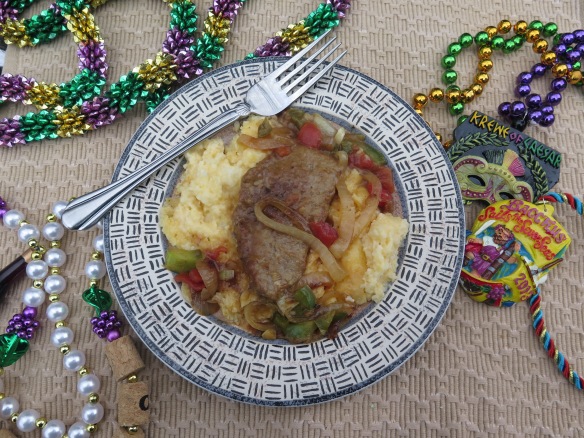 Never heard of this dish?  When I moved to Louisiana, neither had I. Grillades and Grits is a traditional brunch menu item in New Orleans culture, especially on Sunday mornings. During Mardi Gras carnival season it has a special place in the pageantry of the krewes.

My introduction to this Grillades and Grits came from a co-worker. She was from Houma along the marshes and swamps by the coast in the very Cajun heart of Louisiana. One year when she was a teenager, she was a maiden (princess) in one of the Mardi Gras krewes–quite an honor. Her beautiful and elaborate costume included a very heavy oil rig as a head piece which was held by a harness on the float and steadied by an attendant.

Here is a maiden with her elaborate costume on one of this year’s Endymion’s floats–a New Orlean’s krewe which has it’s parade on Saturday night before Fat Tuesday. 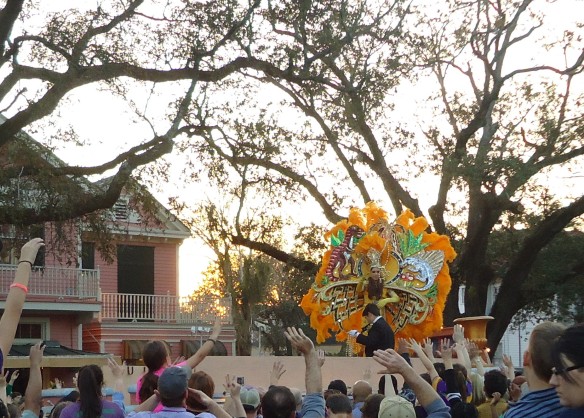 Krewes are organizations which stage very elaborate parades and balls during Mardi Gras carnival season. My co-worker explained that when the parade, ball and festivities were finished for the night, the queen hosted a late-night breakfast at her parent’s home or other venue. The traditional dish served at this meal was Grillades and Grits along with biscuits.

What are Grillades and Grits?

Grillades are very thin, pounded slices of beef or veal. The strips of meat are seasoned and cooked slowly in a rich roux-gravy. Grits is a Southern breakfast cooked cereal made of ground corn. Modern grits are made of hominy which is alkali-treated corn and many have been processed so that they are “Instant” or “quick cooking.” In this recipe the grits enhanced with garlic, cheese and butter which makes them a little more palatable to me.

The origin of this dish is unclear. Nevertheless, it continues with it’s place in New Orleans social events during Mardi Gras. It is served year-round for brunch in many homes in New Orleans. I have not seen Grillades on menus of restaurants in South Louisiana. However, I have noticed a resurgence of grits on upper-scale restaurant menus–often served with shrimp and some sort of sauce.

I found a very tasty recipe for Grillades and Garlic Cheese Grits in “Best of the Best of the South” cookbook.The cookbook series is published by Quail Ridge Press of Brandon, Mississippi. The selection of recipes in this cookbook is outstanding. Check their WEB site for their complete collection which includes cookbooks from each state.  //www.quailridge.com/

I had never eaten grits until moving to Louisiana. My children, on the other hand, are quite familiar with the dish having been served it in school breakfasts. This recipe includes eggs, garlic, cheese and margarine (I reduced the amount given in the recipe). Then it is baked in the oven. I like grits cooked this way. 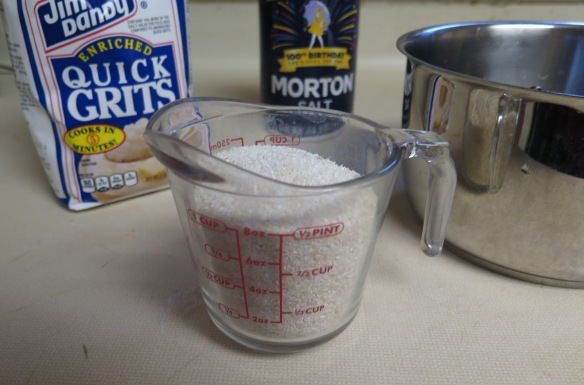 I used Jim Dandy quick-cooking grits. The key to cooking grits so that they are not lumpy is to bring the water to a boil on the stove, add the grits and salt and stir.  After returning to a boil, then reduce the heat to low, cover and let the grits cook for 5 minutes. 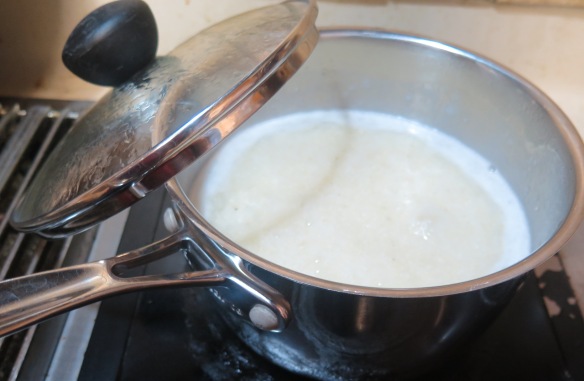 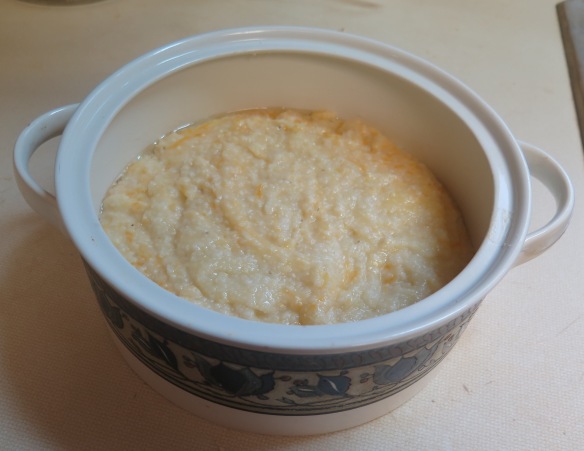 And the baked Garlic Cheese Grits. 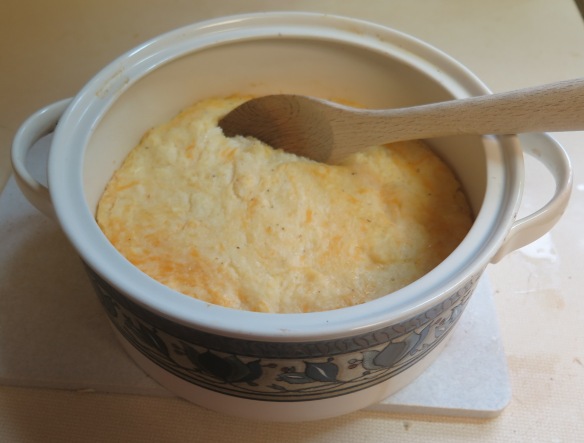 Grillades are thinly sliced pieces of round steak or veal. They are pounded to tenderize the meat. I used cube steak made from round steak. The meat is cooked on the stove, slowly, for a long time along with onions, garlic and tomatoes in a roux. I added bell peppers to one of my dishes. 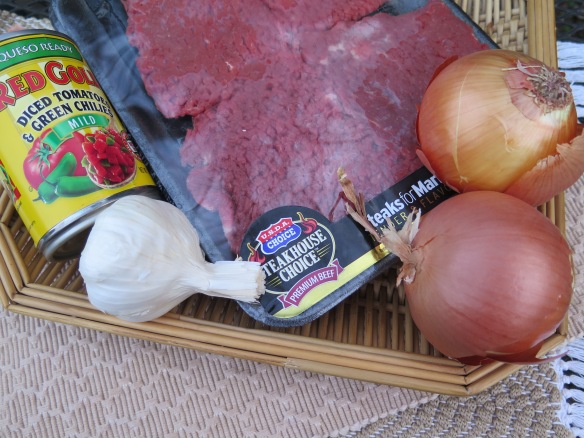 Coat the meat with seasoned flour. 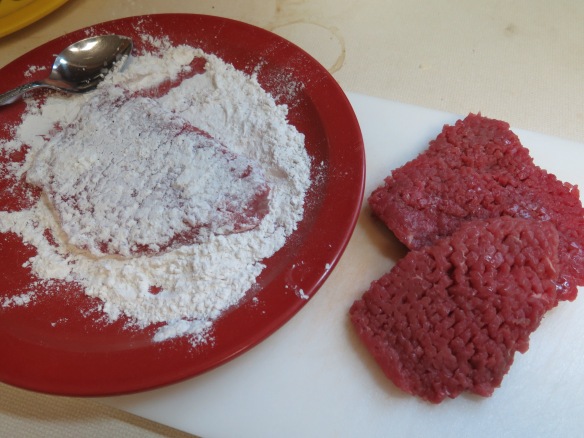 Brown on the stove in some oil. 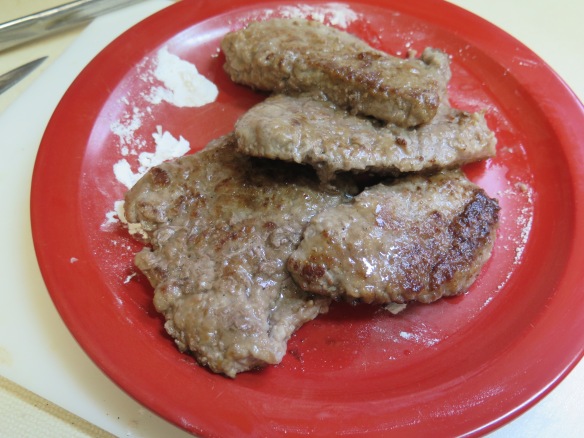 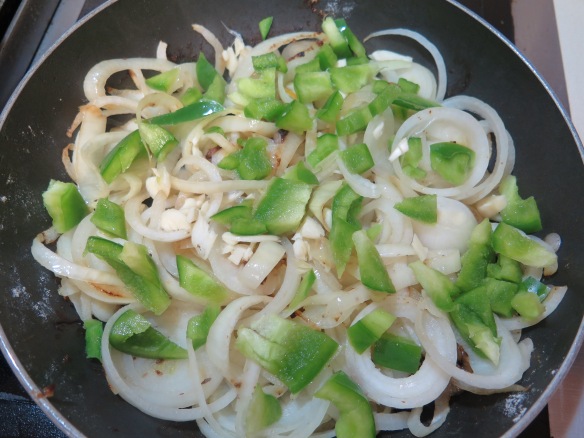 Remove these from the skillet and set aside. In the same skillet make a roux. There will be pieces of browned meat and vegetables left in the skillet. I just leave them–adds to the flavor.

This recipe calls for a roux which is flour browned in oil. It adds to the flavor and thickens the gravy. The key to making a roux is to brown the flour without burning it. You must stir, stir and stir. To make a roux, on low heat, add oil and 3 tbsp flour. 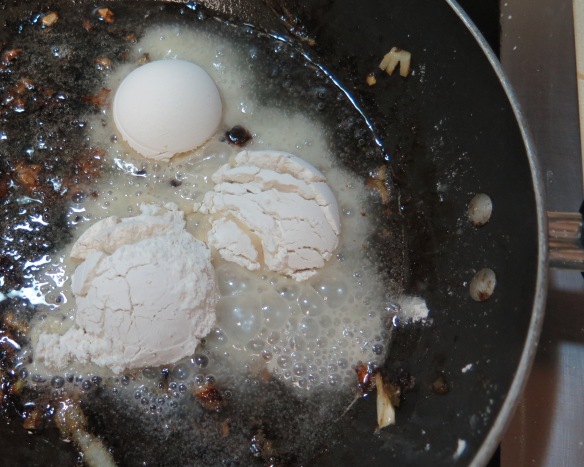 Stir, it will turn pasty and light brown. Keep stirring. 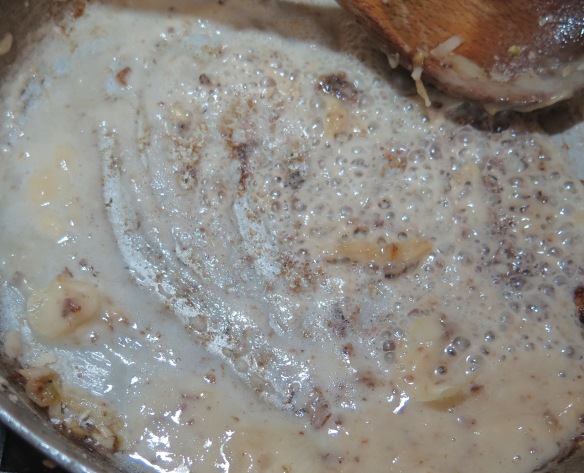 It will turn golden brown like a copper penny. You are done. 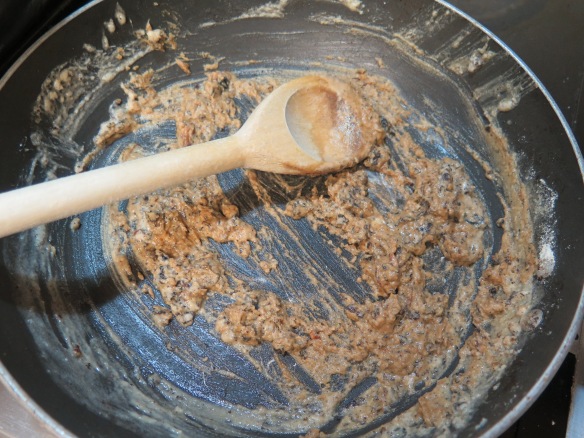 Slowly stir in water and the canned stewed tomatoes with mild green chilies. Keep stirring and return to a boil so that it bubbles and thickens. 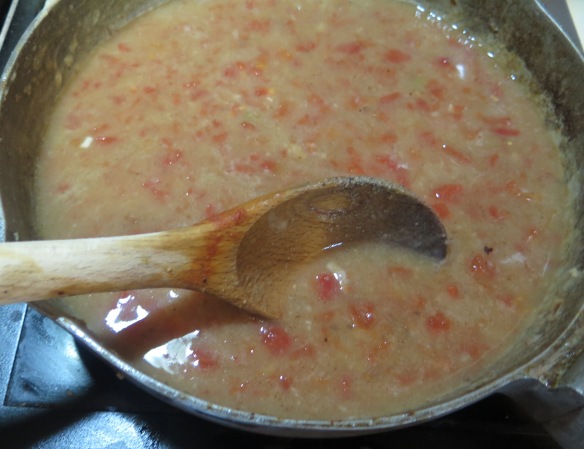 Reduce the heat and add back the seasoned, browned meat and the onion mixture. Cover, and let simmer for an hour. You are done! Serve the grillades with the grits and traditionally serve biscuits, too. 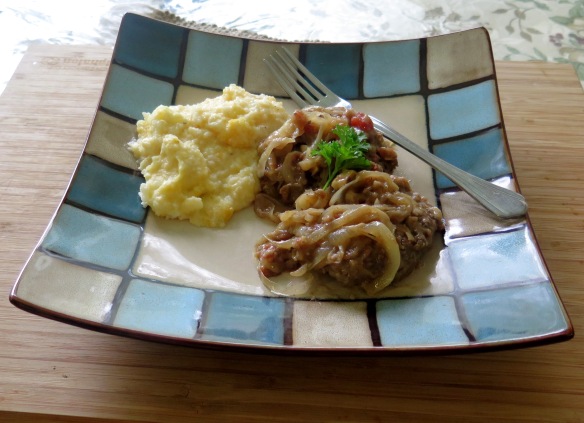 Garlic Cheese Grits submitted by Straight from the Galley Past & Present

In “Best of the Best of the South”, Used with permission by Quail Ridge Press, Brandon, Mississippi.  www.quailridge.com/

Grillades submitted by Straight from the Galley Past & Present

In “Best of the Best of the South”, Used with permission by Quail Ridge Press, Brandon, Mississippi.  www.quailridge.com/

I didn’t go to any Mardi Gras parades this year. But last year we went to Proteus in New Orleans. I love the pagentry. Here are a couple of my favorite photos. Here is the Captain of the Proteus Kewe, he’s the head of the krewe and plans the entire year’s events. He stopped to speak to a friend standing along side us. 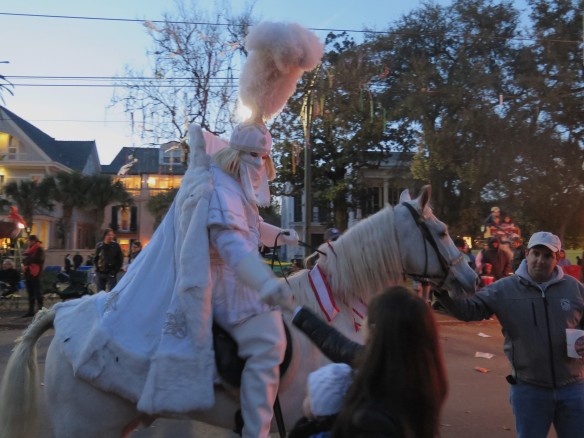 And masked riders along with the Captain. 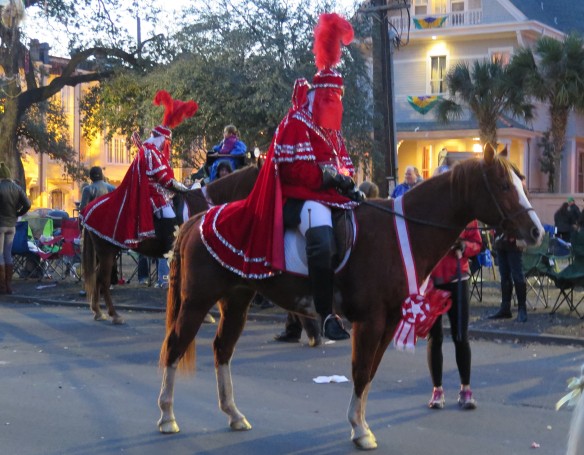 And the monarch of the Proteus parade. 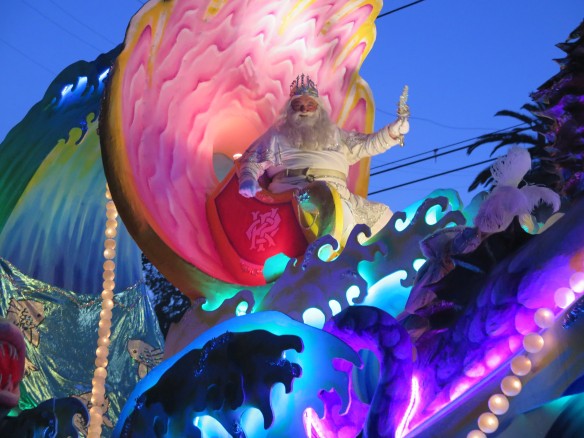 I hope you can make it to New Orleans one year to visit and enjoy the Mardi Gras parades. It is a unique experience. Lots of fun! And enjoy the food while you are here, too!