This shrimp remoulade appetizer is about as easy as it gets to prepare. For a touch of local flavor, I included the native Louisiana vegetable, mirliton. When served on a holiday buffet, this shrimp appetizer is appealing and tasty–very traditional Louisiana cuisine.

This started out as “Avocado Appetizer” in the recipe book, “Thoughts for Food, A Menu Aid”, the 1938 recipe book from my husband’s grandmother. She had attended a luncheon and commented to the hostess about how much she would like the recipe for this appetizer. To her surprise, a package came in the mail a couple of weeks later with the entire book!

The recipe is easy to prepare; the sauce includes only two ingredients. Just chop the vegetables and combine with the sauce ingredients. As I tasted the appetizer, it reminded me of a remoulade sauce and thought that it would be really great with some added boiled shrimp. And I had some mirlitons to use and included these in a variation. 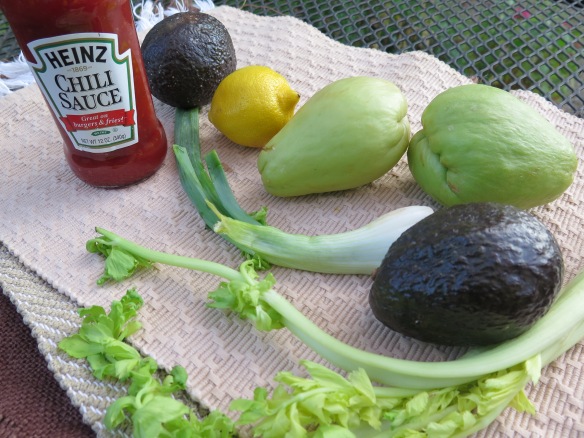 Mirliton is a vegetable which grows on large, climbing vines in southern Louisiana and ripens in the fall. It is a pear shaped vegetable and is also known as chayote squash in its native Mexico. Mirlitons are cooked and the crisp interior meat softens a little. It is very mild tasting, sort of cross between a cucumber and summer squash. It is often substituted for eggplant in recipes. Katrina flooded homes and streets and the hurricane also flooded the vegetation. Many of these old mirliton vines were lost in New Orleans after the storm. They are gradually making their way back into gardens.

Shrimp Remoulade is very much associated with traditional New Orleans cuisine. In restaurants, the appetizer is served as boiled and chilled shrimp with the remoulade sauce over finely shredded mixed lettuces. Remoulade sauce is a French sauce, traditionally a mayonnaise-based sauce.

My first time to sample shrimp remoulade was not too long after moving to Louisiana. We ate at the very formal French Creole restaurant, Arnauds, located on a side street off of Bourbon Street in the French Quarter in New Orleans. I grew up on meat and potatoes; the menu listed shrimp and seafood–help. The waiter must have been directed me to the shrimp remoulade appetizer. Later I discovered that this appetizer is Arnauds’ specialty. It was delicious; and that began my beginning of an appreciation of Louisiana seafood.

Remoulade sauce is a French sauce and is mayonnaise-based. There are many recipe variations of this sauce around the world. The Creole variation most often seen in New Orleans has light a pink color due to the paprika. It often has a very pungent flavor, too, due to the spicy Creole mustard and horseradish. The sauce might remind a person of tartar sauce served with seafood.

A search for New Olreans’ style remoulade sauces on the internet and recipe books from some of these restaurants showed a wide variation in how it is made; typically with a long list of ingredients. Some were heavy on ketchup; others contained none and derived the pink color from paprika. Some were mayonnaise based, others used oil, lemon juice and vinegar. Large amounts of Creole mustard and horseradish were common ingredients.

Readers often commented that there was too much mustard in the recipe. However, Creole mustard and Dijon mustard probably don’t substitute equally. If you don’t follow a recipe’s ingredients exactly, you are likely to get different results. And the sauce, as is currently served in local restaurants, does have a very strong horseradish and Creole mustard flavor.

Sometimes simple is better and this remoulade-style sauce includes only two ingredients – chili sauce and mayonnaise. I was a little reluctant to try mixing these two items at first. However, the chili sauce gives “punch” and flavor of the ingredients included in the recipes I found on the internet. The proportions work and it is a creamy, smooth sauce. Plus, using prepared ingredients give consistent results every time. Sometimes that is a good thing. For the mayonnaise, I always use a “real” mayonnaise, not a salad-type dressing. This recipe doesn’t have the pungent horseradish and mustard flavor of New Orleans’ style remoulade sauces. However, in this recipe you don’t need a horseradish or spicy mustard flavor.

Flavorful, boiled shrimp is key to this appetizer and probably the trickiness part of making the recipe. Boiling shrimp is not hard, but over-cooked shrimp is tough and stringy. The raw shrimp has only to boil a minute until it turns white/pink–then it steeps in the flavorful, salted cooking liquid for 10 minutes to absorb flavors. The tendency is to over-boil the shrimp. But it doesn’t take long to boil shrimp, especially small ones.

For this recipe, I use smaller shrimp than is typically served in a restaurant appetizer. I use 51-60 count shrimp and purchase frozen, peeled shrimp, defrosting it under running water. This takes about half an hour. (Locally, really fresh, unfrozen shrimp is sometimes hard to find.) 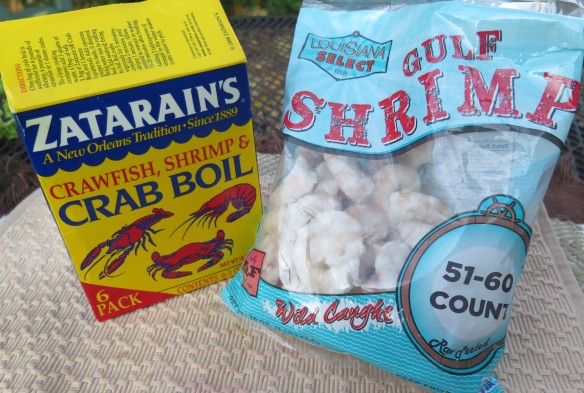 To season and flavor the shrimp, either prepared seafood boil or your own mix consisting of bay leaves, peppercorns, coriander seeds and cayenne pepper can be used. Either way, I always add lemon, garlic cloves and onion to the broth. If making your own shrimp boil, it is easy to add too much pepper. Only a few peppercorns are needed and cayenne pepper is optional. Steeping the shrimp after boiling is key for the shrimp to absorb the flavor of the shrimp boil.

A package of seafood boil in this Zatarian’s box is enough for 4 lb shrimp. That’s alot of shrimp; so I don’t steep the shrimp for as long if using this prepared mix.

To boil the shrimp, add the seafood mix and other seasoning ingredients to the water and bring to a boil. After the water comes to a boil, add the defrosted shrimp.

Return the water to a boil; boil shrimp for only a minute until the shrimp turns white/pink. Then remove the shrimp from the stove and let it steep in the salted, cooking water to absorb flavor for 10 minutes. Then pour off the boiling water and chill the shrimp.

The mirlitons need to boil about 45 minutes until a knife pierces the skin showing the interior is soft. Then the mirliton peel easily comes off; the large seed inside can be removed and vegetable is diced and added to the other ingredients.

After the shrimp and mirlitons are cooked and chilled; the recipe is easy to assemble. Mix the chili sauce and mayonnaise, add it to the shrimp, mirliton, avocado, celery and green onions. If mirlitons are not available, increase the avocados in the recipe. Serve in a fancy dish. An elegant presentation! 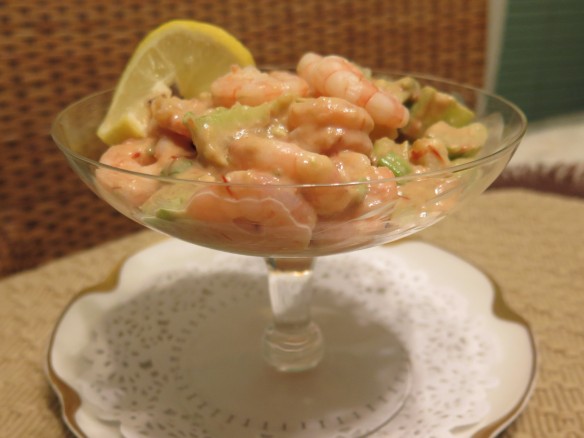 Enjoy this shrimp appetizer during the holiday season!