Oatmeal Bars is a favorite recipe from my grandmother, Ida Belle Blough Snavely. As children, we’d visit every summer on her Iowa farm. Grandma Ida loved to have her grandchildren help make this recipe. And the soft, chewy oatmeal-texture bars kind of grow on you.  We had a cousin reunion recently, I thought it would be a good time to share the recipe. 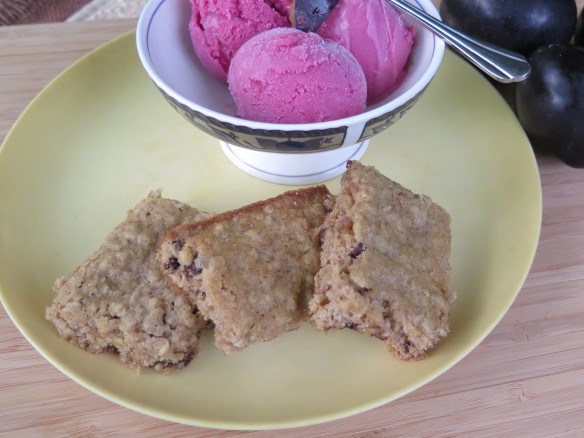 The oatmeal bars really shine when served with fruit or ice cream. Here they are served with spicy plum  frozen yogurt. The two make a great pairing for a hot summer day.

We were quite young when we’d help grandma in her kitchen making this recipe. Probably pre-teens. Grandma was extremely thrifty and  she was very proud that you could entirely mix up the batch of cookie/bars using only one bowl. As there was no dishwasher on the Iowa farm, using less cooking equipment was a plus. It is a good recipe for kids to cook for that fact. No electric equipment; just add ingredients and stir.

This recipe can have as many additions as you can imagine. Nuts, raisins, chocolate chips taste good in the bars. The recipe includes a teaspoon of cinnamon which definitely adds to the flavor but doesn’t overpower it.

For the oatmeal, I use quick cooking oatmeal. Old fashioned oatmeal leaves a chewy taste and is drier; but you might like that taste. Either margarine or butter, or a combination, can be used. The original recipe uses lard–and they probably had a steady supply of that on the farm as they raised their own hogs. We’ve come a long way.

Another variation is to make drop cookies by increasing the flour to two cups. Increase the oven temperature to 375 degrees.

For baking, don’t over bake the bars; the recipe uses alot of oatmeal. I found that baking at 350 degrees for 8 to 10 minutes gave a slightly brown top and the bars were still soft.

My grandmother was born on May 26, 1889. It seems like a time warp–years ago. Her grandfather was one of the original settlers from Pennsylvania; traveling to Iowa to purchase farm land for a dollar an acre by carrying gold coins on a money belt. Those early settlers were very thrifty, hard working and self-sufficient. Values that are timeless.

As the years went by, I discovered that Grandma Ida shared the recipe with all her grandchildren. We are scattered all over the country; but it was interesting to discover when we got together that we all had the same recipe. And such are family traditions.

Variation: Increase flour to 2 cups. Drop by teaspoons on to a cookie sheet. Bake at 375 degrees till light brown.