Peeled crawfish tails blend very nicely with pasta to create some mighty tasty entrees and pasta salads. Springtime is when crawfish are in season, so I thought I’d adapt one of my favorite pasta dishes, “Chicken Tetrazzini,” substituting crawfish tails. Tetrazzini is a chicken or seafood pasta dish with mushrooms in a rich cream and cheese sauce. It is one of the first casserole dishes which I learned to make and is still one of my favorites. The crawfish recipe is a slight adaption to enhance the dish. I included my original chicken tetrazzini recipe and also a crawfish variation. Both are delicious and fitting for a springtime dinner! 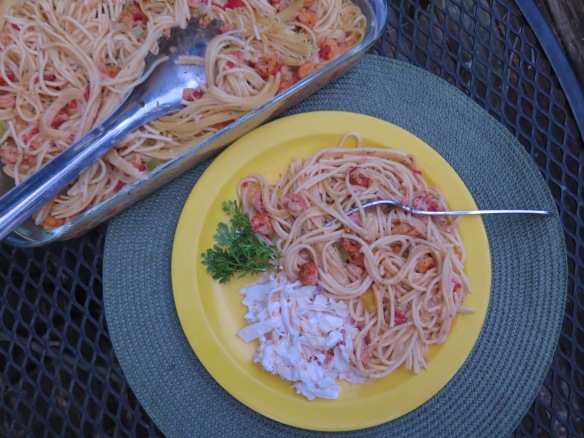 What is Chicken Tetrazzini?

Tetrazzini is an American dish which was named after the Italian opera star, Luisa Tetrazzini. She was a long-time resident of the Palace Hotel in San Francisco, California and some say that the dish was invented by Ernest Arbogast, the chef at the hotel, somewhere in the years between 1908 and 1910. The first published reference to “Turkey Tetrazzini” was by Good Housekeeping in 1908, possibly in reference to a New York City hotel, so there are several stories to the origin of the dish.  She must have been a special patron to have a pasta dish named after her! https://en.wikipedia.org/wiki/Tetrazzini 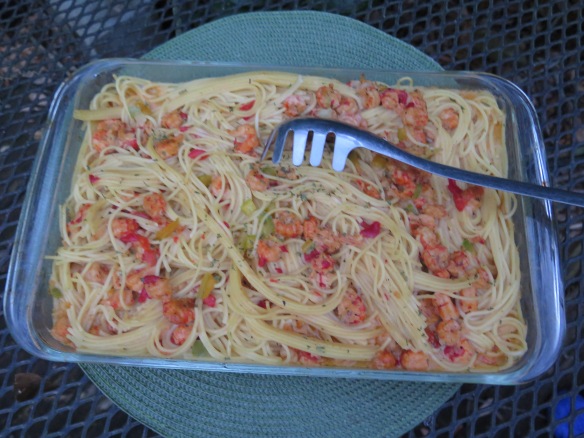 In any event, there is no standard recipe. “Tetrazzini” dishes typically contain diced poultry or seafood with mushrooms in a creamy and cheesy sauce with spaghetti or egg noodles. The sauce may be served over the pasta or baked as a casserole, topped with cheese and bread crumbs.

The mushroom is one hallmark ingredient which makes the dish “tetrazzini.” Typically, the recipes are loaded with mushrooms. However, I rarely cook with mushrooms after having several allergic reactions to them. Also, mushrooms don’t enhance the crawfish variation.  But to make the dish authentic, add the mushrooms.

I clipped the recipe from a 1970’s Better Home’s & Garden magazine advertisement for Ronco brand spaghetti and have kept it all these years. (Never throw away a good recipe.) I made it exactly as the original recipe (except for the mushrooms) and it turned out great and looks very similar to the original one. See for yourself. 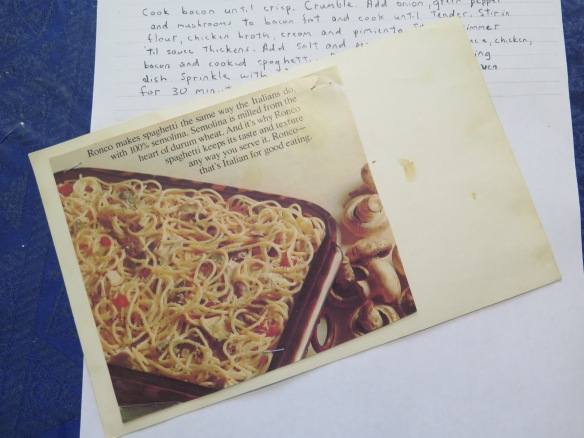 The two “secret ingredients” in the chicken recipe which enhance the flavor and make this pasta dish unique are crumbled bacon bits and pimento. I’ll never know why pimento was added, but it adds a “surprise” flavor to the dish. And I don’t generally think of bacon in pasta dishes but this also adds an interesting flavor. 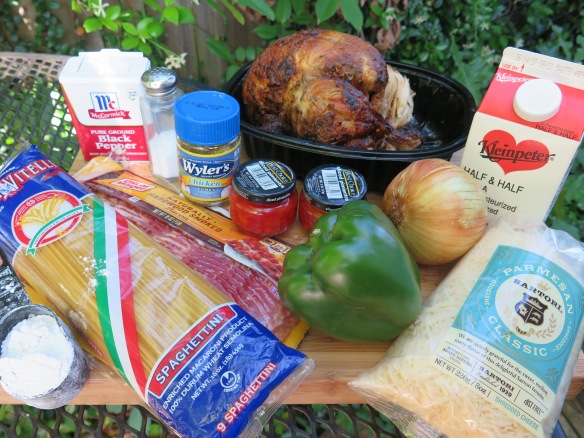 This recipe uses cooked, diced chicken or turkey.  I’ll make it around Thanksgiving or the holidays with leftover turkey. This time I used store purchased rotisserie chicken. We’ll eat about half the chicken at one meal and I’ll make another recipe from the remaining chicken. If you don’t have leftover chicken or turkey, saute one pound of seasoned chicken tenders on the stove and dice them up. 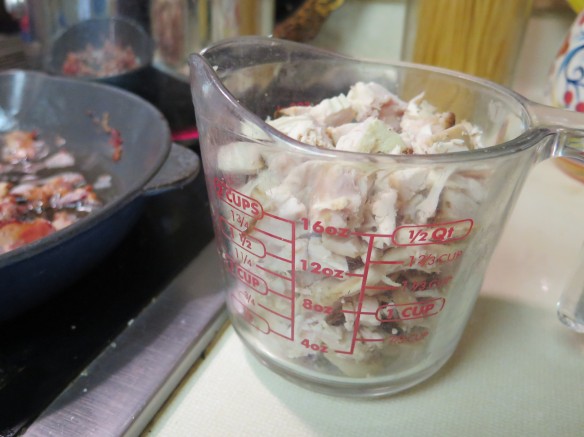 To make the chicken version of the recipe, saute bacon slices until crisp. Remove, crumble the bacon and drain off excess bacon fat. Add chopped onions and bell pepper and saute. Then add flour and 2 Tbsp bacon fat (or margarine or oil) and cook several minutes to make a “blonde roux.” (This is one where the flour is cooked slightly — not browned as in a traditional Cajun roux.) Add the cream (or low-fat milk) and chicken broth as well as all the other ingredients — pimento, crumbled bacon, cooked diced chicken, salt and pepper. Simmer until thickened and heated through. Cook the pasta and drain. Add to the cream sauce along with grated Parmesan cheese and toss to combine. Pour into a greased casserole dish and cook until bubbly.  Serve, garnishing with fresh parsley.

The crawfish version is similar. I omit the bacon bits, since the crawfish provide plenty of flavor.

To make this variation. saute the onions and bell pepper in butter, margarine or vegetable oil, then added the crawfish tails to cook them several minutes. Sprinkle with Tony Chachere’s Creole Seasoning. Remember, frozen, peeled crawfish tails (defrosted) are not entirely cooked and should be sauteed to cook them completely. Then follow along with the chicken tetrazzini version to finish the preparation.

A note about the recipe and about peeled, frozen crawfish tails.

Both recipe variations are delicious. The recipe is all about the pasta. As you can see from the photos, the dish is not swimming in sauce. Twelve ounces of dry spaghetti make a large, cooked recipe, so the sauce and chicken enhances the pasta. That idea follows the guidelines of a Mediterranean Diet.

My intention was to post on my blog several crawfish recipes this spring. However, I discovered to my dismay that Louisiana, frozen peeled crawfish tails were priced around $17.00 a pound. Hum, just a little high for my budget. So, I made only one recipe attempt using crawfish tails and returned to using chicken. I’ll save rest of my crawfish ideas for next spring (and I have several more recipes to share)!

In the meantime, enjoy either of these dishes!

3 thoughts on “Crawfish or Chicken Tetrazzini — Your Choice”