I have fond memories of visiting New Orleans in past years for Mardi Gras parades and events. Really, we love to visit the city any time of the year, take in sights and eat at one of the many wonderful restaurants. Recently we visited a small, eclectic neighborhood restaurant for breakfast. The mid-city restaurant, in a shot gun house, always serves very creative dishes. It inspired me to make a similar French Toast entree based on the one we ate at the restaurant to commemorate this great city and Mardi Gras! 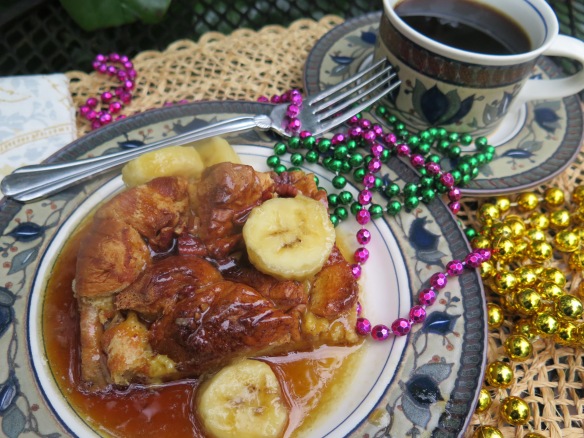 At the New Orleans restaurant, we ordered French Toast which was filled with bananas and bacon bits. It was delicious. A butter spread with cane syrup and pecans swirled in was served on the side. I decided to combine these ideas and make a French Toast Casserole. I added “Bananas Foster Sauce” which incorporated sugar cane syrup to reproduce all the flavors of the restaurant dish. The sauce turned out to be the best part of the dish and it is perhaps one of the tastiest things I have made in awhile! 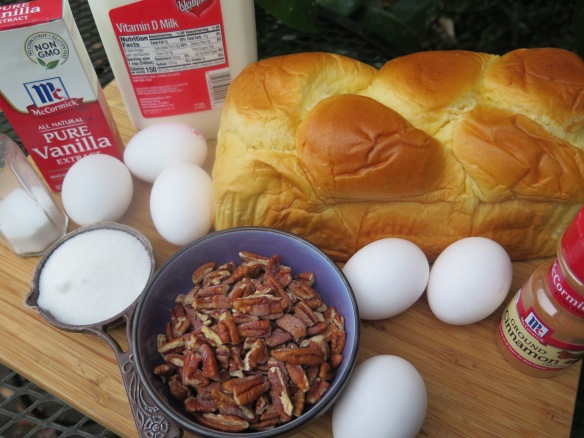 The neighborhood restaurant is “Biscuits & Buns on Banks” (that’s Bank Street). Sometimes these small, simple restaurants are the best ones around as attested to by the crowd of folks out for a meal (along with their dogs). We’d eaten there several years ago as well and I included another inspired drink recipe in that blog post. 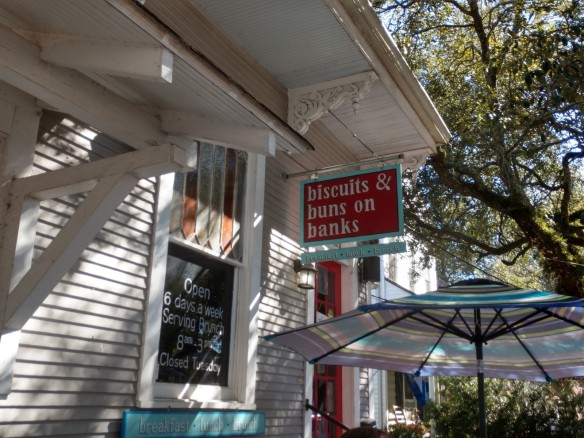 The restaurant is located in an old “shot gun” house which are typically found throughout the city of New Orleans. This means that person can shoot a rifle and it will pass through every room in the house. Basically, the house is one room wide and the “dining rooms” are all the rooms of the old house. The “kitchen” or short order grill is located as you first walk in the restaurant. 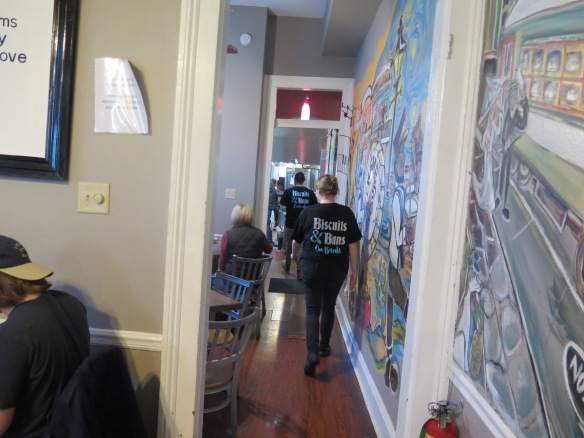 Th walls are painted scenes — real and imagined — of the city adding to the ambiance of the restaurant.

The restaurant used brioche bread for their French Toast. This “secret ingredient” really made the dish tasty.  Brioche is a yeast-leavened bread, like regular bread, but it is richer because it also contains eggs, butter, milk and often sugar. The bread contains the same ingredients as challah. And so I used a loaf (actually 1-1/2 loaves) of brioche bread to make my casserole. The slightly sweet, rich bread really worked well in the breakfast casserole. 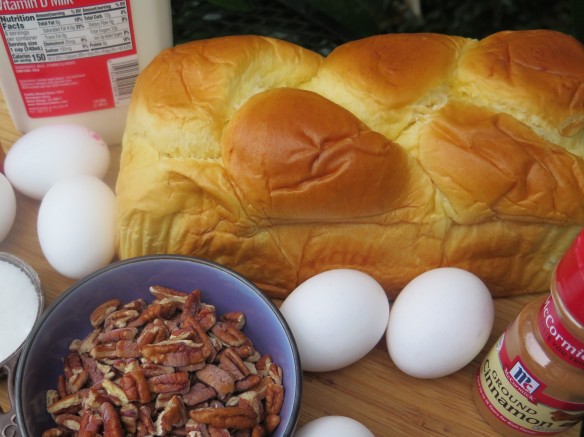 The ingredients in my French Toast Casserole are similar to the ones in the dessert Bread Puddings that I have featured in other blog posts but with quite a bit less sugar. For flavor, I added pecans to the casserole and along with a bit of cinnamon. As the casserole baked, the pecans and cinnamon sent off aromatic flavors throughout the kitchen. Yum!

Making the casserole is simple. Break up the bread into large cubes and place in an oiled casserole dish. Combine the milk and beaten eggs along with a little sugar, vanilla extract and a pinch of salt and cinnamon. Add in pecan pieces. 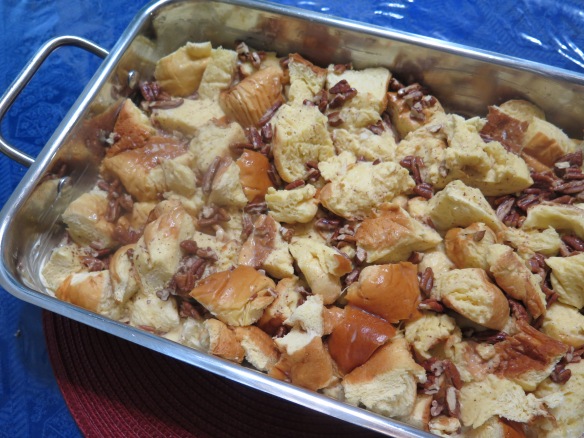 Bake in a 350 degree oven until cooked through and crusty and brown on top.

The “Bananas Foster and Cane Syrup Sauce” is my own concoction and perhaps one of the best sauces I’ve made. The inspiration for it is the quintessential dessert, “Bananas Foster,” served at restaurants in New Orleans. This dessert originated at Brennan’s Restaurant in the French Quarter in 1951. The dessert was especially made for a dinner that night in honor of the New Orleans Crime Commission chairman, Richard Foster, and was a big hit. I has been served at the Brennan’s Restaurant since then. At that time, New Orleans was a huge produce importer and the Brennan family was involved in the fruit produce import industry. They apparently had alot of bananas in the restaurant kitchen that night which were quickly made into a dessert!

My sauce variation includes butter (or margarine), sugar, Steen’s cane syrup, bourbon and, of course, bananas. Steen’s cane syrup is extracted from Louisiana sugar cane. It gives the sauce a rich brown color and a slight molasses flavor. All the flavors, including bananas, meld together in the sauce and it is just perfect. It can be used as a ice cream dessert sauce as well as on the French Toast. 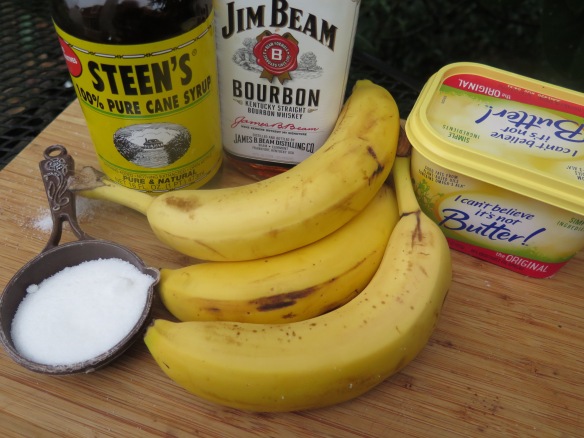 Let the butter (or margarine), sugar and Steen’s cane syrup come to a boil on the stove.  Cook and stir several minutes. Add in the bourbon and cook a little longer. Then remove from the heat of the stove. Add sliced bananas and stir to combine. The bananas will continue to cook in the hot sauce. 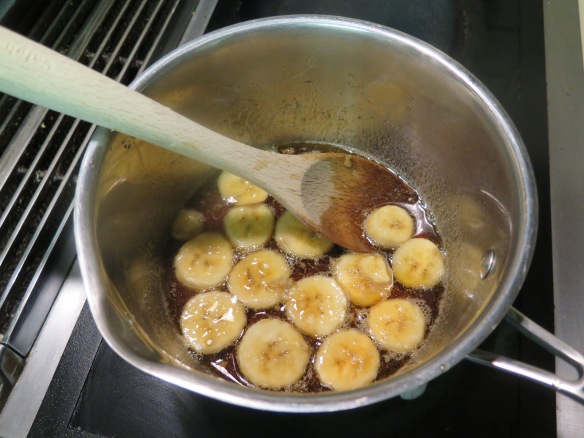 Cut and serve the French Toast Casserole. Pour the sauce with bananas over the top and serve with New Orleans-style coffee which is a dark roast coffee. 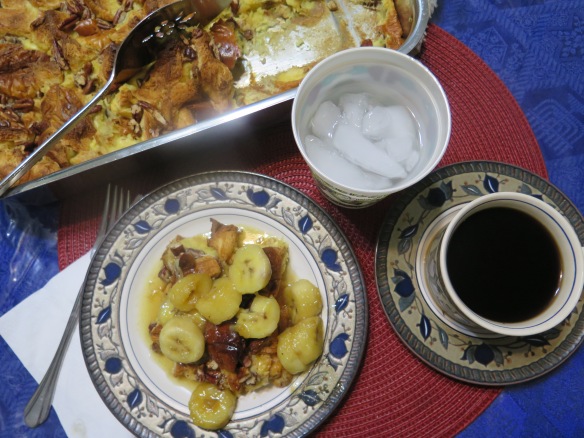 This recipe is now one of my breakfast favorites. All the flavors of the “Bananas Foster and Cane Syrup Sauce” blend together go perfectly with the “French Toast Casserole.” Enjoy! If you can’t visit New Orleans, enjoy a bit of the city at your breakfast table. 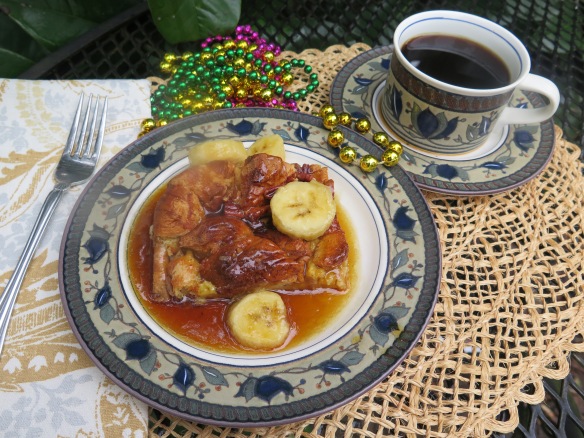