Will the REAL jambalaya recipe please come forward? Ever since President Trump served “Carolina Gold Rice Jambalaya” in April at a state dinner honoring French President, Emmanuel Macron and his wife Brigitte, controversy has been brewing in Louisiana. That is not “jambalaya,” folks protested. This set off a flurry of newspaper editorials, recipes and opinions in our state. The truth is that there are many variations of jambalaya and many good recipes. Here’s own recipe, I think it’s one of the best!

The jambalaya served at the Washington D.C. state dinner was reportedly more akin to rice pilaf with vegetables and seasonings from “the White House lawn garden” than our jambalaya. There was no meat or seafood in the dish and it was made using short grain rice from South Carolina — not even Louisiana long grain rice. There was little resemblance to the jambalaya cooked in Louisiana.

Both Louisiana senators attended the dinner, as well as our Governor. Our Senator Kennedy thanked President Macron for selling Louisiana to the US (the Louisiana Purchase happened in 1803). Nevertheless, it points out the ties of France to our state.

Jambalaya is a staple dish in South Louisiana. It is often featured at community organization fundraiser meals or church fairs — and is prepared by chefs or cooks in large cast iron pots. Gonzales, a nearby community, holds an annual “Jambalaya Festival” in spring and cook-off to name the “World’s best Jambalaya Cook.”  The Advocate published the recipe from one of the past winners. Pork, shrimp and sausage was used in this recipe. The meat was seared and seasoned in the cast iron pot and rice was added to the meat drippings along with Cajun seasonings. Simple but tasty.

Jambalaya is a flavorful rice and meat dish. I visited a client in Pierre Part, Louisiana, deep in Cajun country. This client used the jambalaya recipe from Emeril Lagasse,  noted New Orleans’ chef and T.V. personality. He says that folks love his jambalaya. Interestingly, my recipe is similar. Here are some generalizations regarding jambalaya recipes.

Here are most of the ingredients in my recipe. Often I’ll make a  homemade spice blend rather than using a commercial Cajun seasoning.

For my jambalaya recipe I use either chicken tenders (with the tendons removed) or diced pork. For pork, Boston butt is generally used (or cheek jowl) in jambalaya. One grocery store sells pork packages with the meat already de-boned and diced. I usually cut these into smaller pieces. 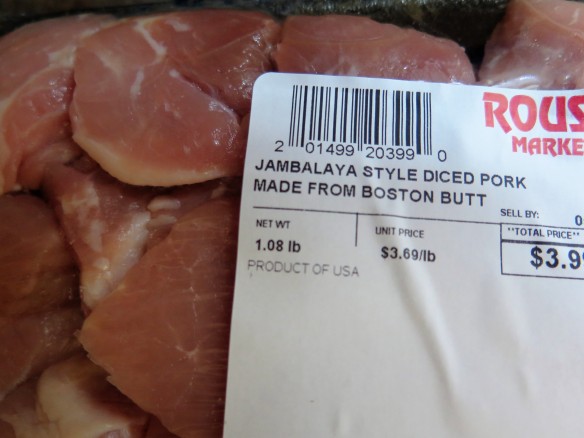 I always include smoked sausage in my dish. I like skinless sausage and usually purchase mild, all-beef sausage. This time I got a package of smoked sausage with mixed meats. 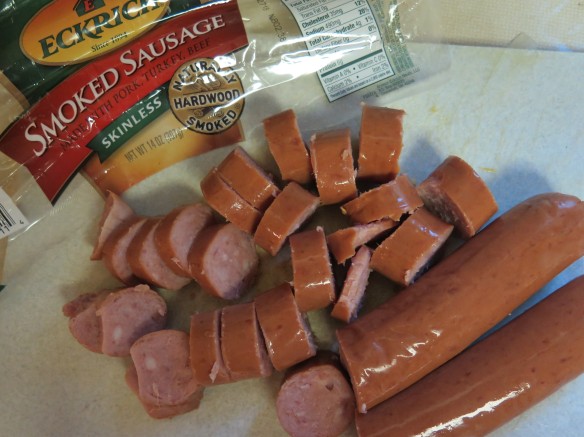 All the meats (including chicken or pork) and sausage are seared individually in a large pot. Then they are set aside while the next ingredient cooks.  Here’s the Boston butt cooking. I diced this further after cooking.

Lots of diced vegetables for seasonings make a flavorful dish. The Cajun “Holy Trinity” of seasonings is onion, bell pepper and celery. These make the foundation of many Cajun dishes. I add garlic as well. This time I added some sweet yellow and orange peppers. I saute the vegetables in the drippings of the chicken or pork until wilted.

Jambalaya is a flavorful dish. My spice blend is adapted from Emeril Lagasse and includes salt, garlic powder, onion powder, oregano, thyme and both black and cayenne peppers. I also add Worcestershire sauce to the recipe.

After all the meat  is individually seared and the diced vegetables are sauteed, everything is added back to the pot, along with broth, water and raw long grain rice.

Cover with a tight fitting lid and let simmer and go do something else. (When jambalaya is made in a large cast iron pot for a crowd, the jambalaya is left uncovered). When done, the rice is absorbed and the flavors blend together.

This is a dish that my kids love and always request when they come home to visit. Now my grandson requests the dish, too. Make a large pot, the left-overs are tasty and quickly eaten.  For a meal, serve with French bread and a salad. 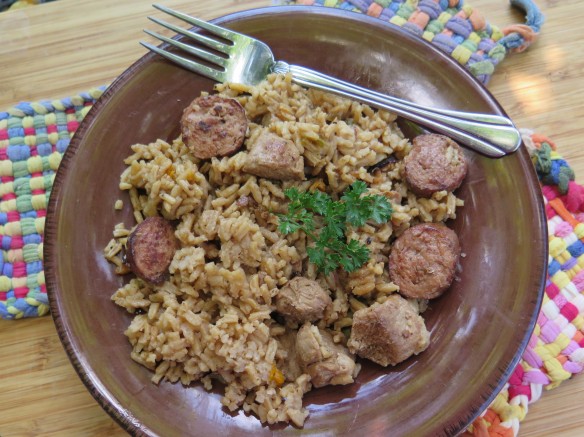 Is this the “real” Cajun jambalaya? There are many variations to this recipe; many great dishes. Mine comes close to the best you can make. 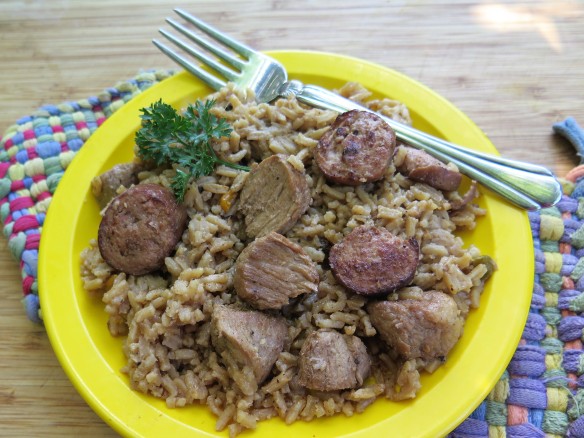