It’s Mardi Gras season in Louisiana and today we’re making King Cakes. This year I have teenager, Jessi, to help me make these sweet, rich and delicious yeast breads known as King Cakes. King cakes fill the grocery stores and hundreds are sold in New Orleans during the Mardi Gras season. It is fairly easy to make a king cake yourself at home using this recipe. The key is using a heavy-duty mixer to do the kneading. 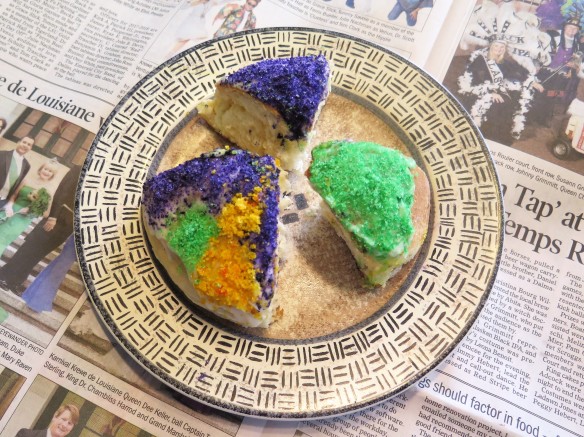 Jessi loves to bake and the plan was for Jessi to make a king cake along with me following the recipe I sent her. Jessi lives about 90 miles away and so we used Facebook messenger to communicate. Jessi has a natural ability in the kitchen according to her aunt. Jessi is home schooled, lives with her grandparents (who took the photos) and loves to explore different recipes and ideas. Give her a recipe topic and she quickly gets the hang of it. 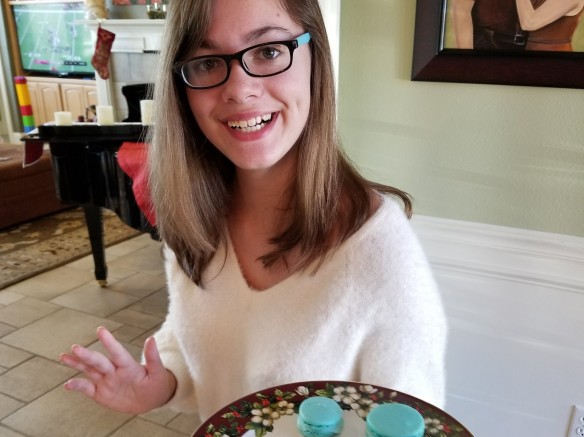 The King cake challenge turned out to be a little complicated than planned because I forgot to list an essential ingredient — water — in the recipe. Jessi was ahead of me and didn’t get the message to adjust the ingredients until after she was finished. And so there was more flour than needed making the dough hard to roll out. But Jess kept going and so we can show you the process. Jess’s grandparents says that her King Cakes tasted delicious. I was impressed.

What are King Cakes?

King cakes are associated with the Mardi Gras carnival season which extends from the 12th Night of Christmas (January 6th) or “the Epiphany” and extends to “Fat Tuesday,” or Shrove Tuesday; which is the beginning of Lent and the end of partying. The Christian religion tradition says the Epiphany is where the wise men were introduced to the baby Jesus. Hence the cakes are in honor of the king.

In Louisiana, the Mardi Gras season is filled with krewes or social organizations, balls, parties, parades and revelry. Lot’s of fun for everyone. 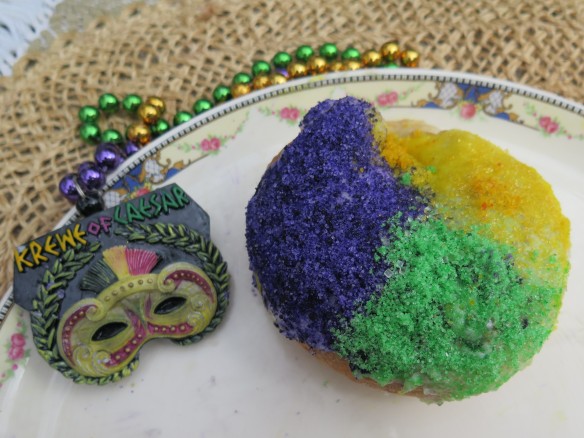 Traditional King Cakes are a brioche bread shaped in a ring with a filling and topped with icing and Mardi Gras colors of purple, gold and green. Broiche is a very rich French yeast bread with layers and layers a butter kneaded into the bread making it flaky and light. Usually a tiny plastic baby or a bean is hidden in the cake. Whomever gets the baby is supposed to host the next party — or bring the next king cake to the office. Here’s a king cake I made several years ago on a blog post.  (February 2014). 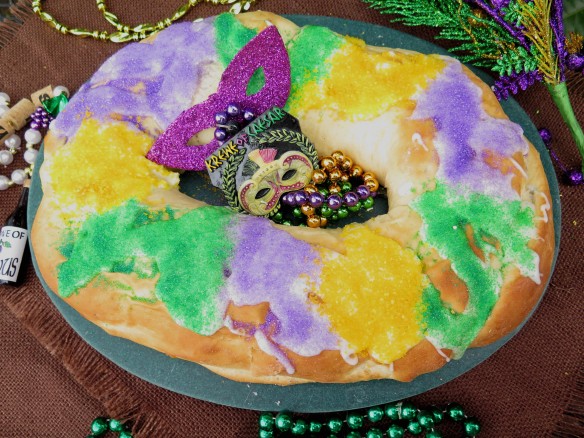 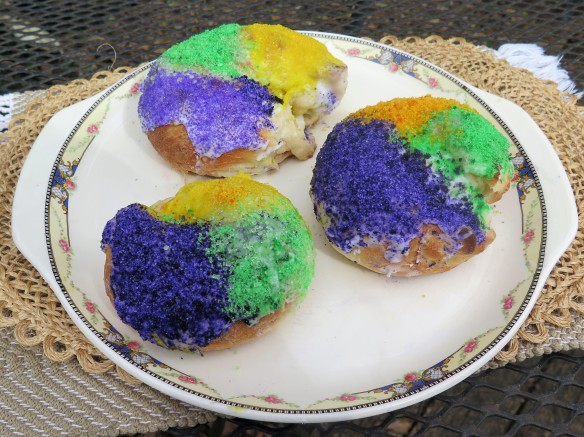 This yeast bread recipe is different from most yeast bread recipes. First, the yeast is added to the flour — not the warm milk. Second, a brioche bread has the butter folded into the dough. Then the dough is rolled out again. This is repeated over and over making a rich, flaky bread. Rolling out the dough over and over turned out to be very tedious and not really easy.  So while this traditional brioche is tasty, it is not the type of king cake yeast bread typically found in grocery stores these days. 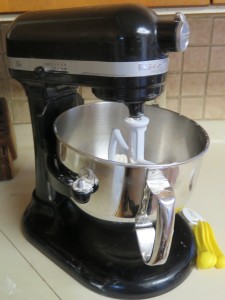 The recipe is easy in the sense that the dough is mixed and kneaded in an electric mixer. No kneading by hand. Fortunately, Jessi had a Kitchen Aide Mixer to use for making the dough. It is absolutely essential to use a heavy duty mixer such as this one because bread dough is elastic and hard to knead. I blew a motor on a mixer trying to make bread one time. So if you use this process, please use a Kitchen Aide Mixer of similar heavy duty one. My NEW mixer is shown at left.

Here we go. I’m giving instructions which include a few of the tips which we learned along the way.  The recipe and instructions are adapted from a “Better Homes and Gardens” cookbook, but the end result has no resemblance to the original recipe.

Jessi has 2 cups of flour measured out in the mixer bowl and is adding a packet of dry yeast. Mix to distribute the yeast. 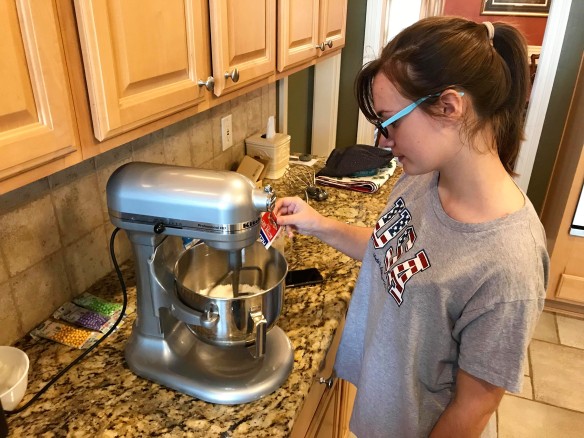 The next step to heat the milk, sugar and salt until nice and warm — about 120 – 130 degrees Fahrenheit. The milk will feel warm if it touches your wrist but shouldn’t hurt you. If the milk steams — too hot — let it cool some. 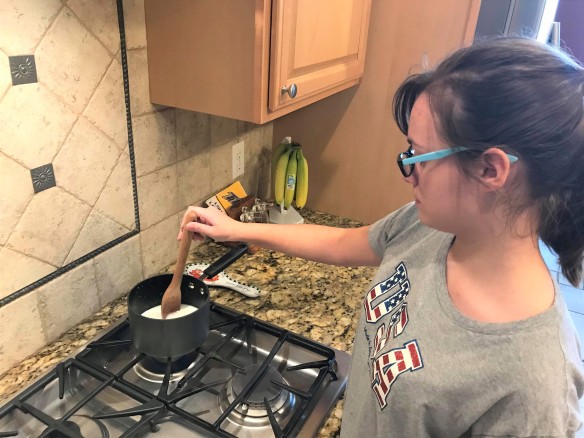 Add the milk/sugar/salt to the flour along with an egg. Beat on low speed for 30 seconds, scrape down. 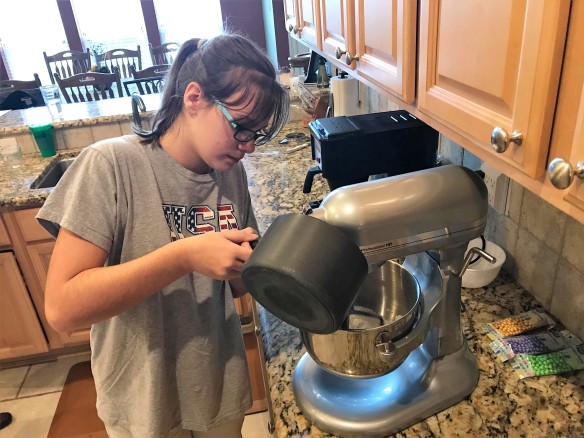 Then beat at  high speed for 2 minutes. 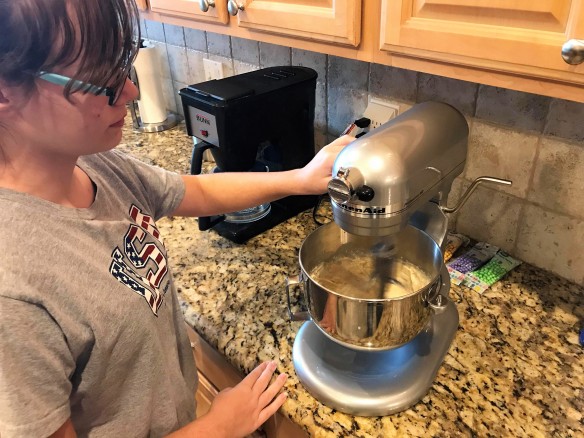 Turn dough out onto a floured surface, knead a few times. 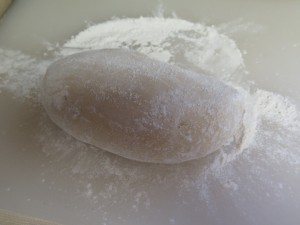 Here’s my dough. Divide dough in half and set one half aside.

Roll one half out into large rectangle and dot with 2 Tbsp butter. 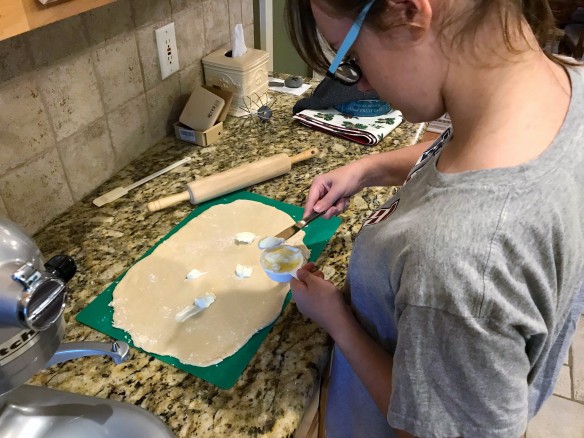 Fold crosswise into thirds and turn dough 45 degrees or a quarter turn. Roll out into another rectangle and dot with additional 2 Tbsp butter, fold in thirds and rotate. Repeat a third time.

This time roll into long rectangle. For a full sized king cake, spread on cream cheese & almond flavored filling — or other filling of your choice.  Jessi would like a cinnamon sugar filling next time. 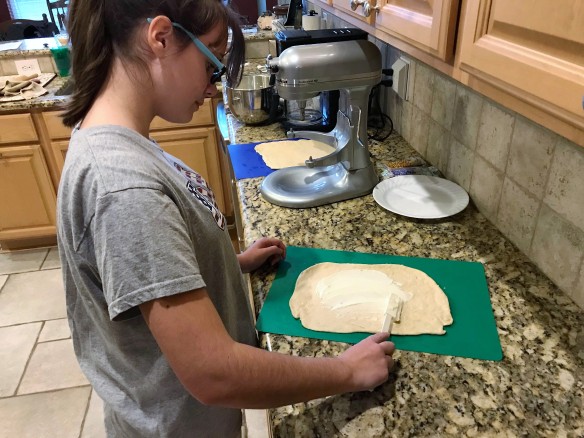 Roll up. For full size king cake, just shape into a ring and pinch edges together. (Don’t cut into thirds as shown here –this shape and size is perfect for large king cake.) 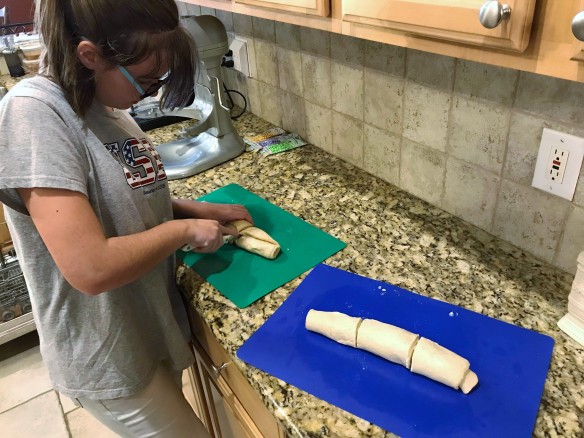 I made mini king cakes. Here’s my work in progress. 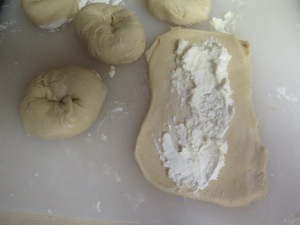 For mini king cakes cut the large piece of dough in half and set one half aside. Then cut each half into thirds. Roll each small piece into a long rectangle. Add filling, roll up and shape into a small circle or oval. Pinch edges together; use water if needed to help cut edges stick. You should have six small mini king cakes when both dough halves are rolled out.

Traditionally, a tiny plastic baby is hidden in each king cake prior to baking. Instead, place a red kidney bean or navy bean somewhere on each piece of dough prior to rolling up.  The person who selects the piece with the “baby” is supposed to host the next party! No wonder there is so much partying in Louisiana in Mardi Gras season! 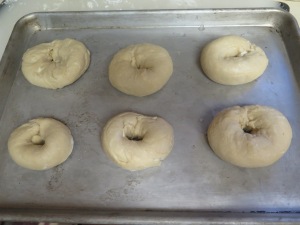 Transfer to a baking sheet. Cover with a damp towel and set in a warm place to rise until doubled in size; at least an hour or two. We went to a movie. 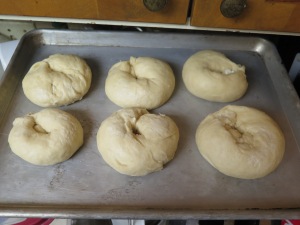 Here are my mini king cakes after rising. 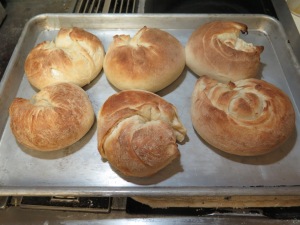 Bake in 375 degree oven for about 15 minutes until nicely browned and king cake sounds hollow when you thump on it.

Let the king cakes cool completely on a wire rack.

Meanwhile, get the colored sugars ready.  You can either use colored sprinkles from a store or add food coloring to a small amount of sugar (about 1/4 cup sugar for each color). I like the gel variety of food color because it makes a more brilliant colored sugar. 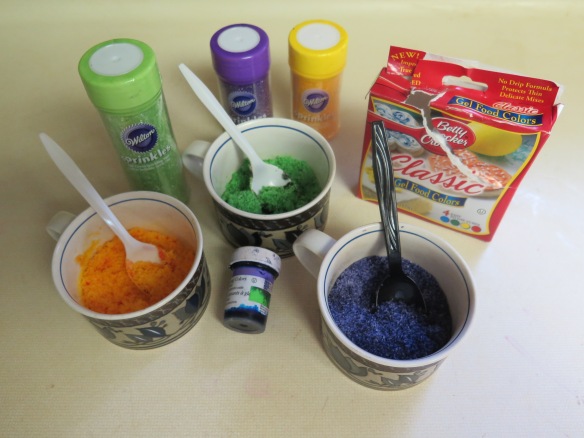 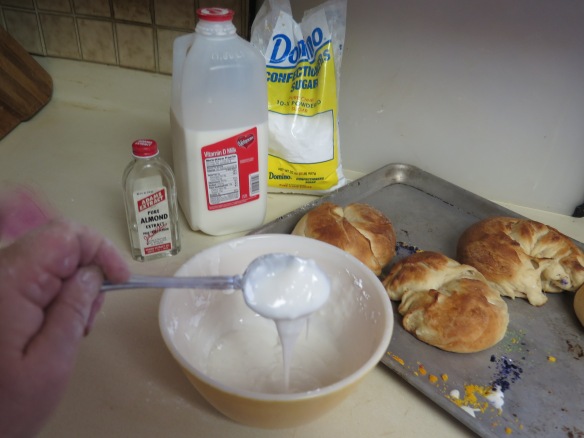 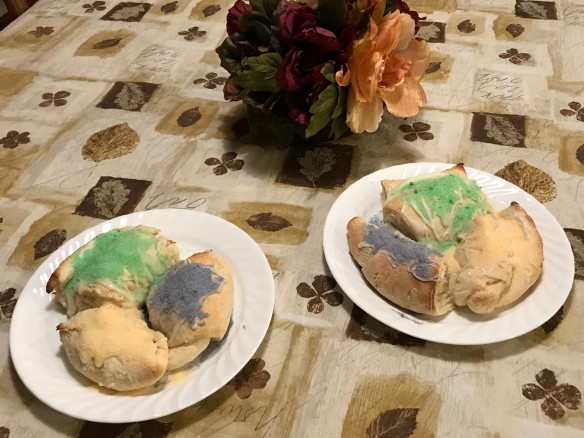 Here’s Jessi baking bread over the holidays with a cousin helping her. Master chef some day? We’ll see. The king cake project was an experiment and we both learned from it. And we both have king cakes to share with family and friends. 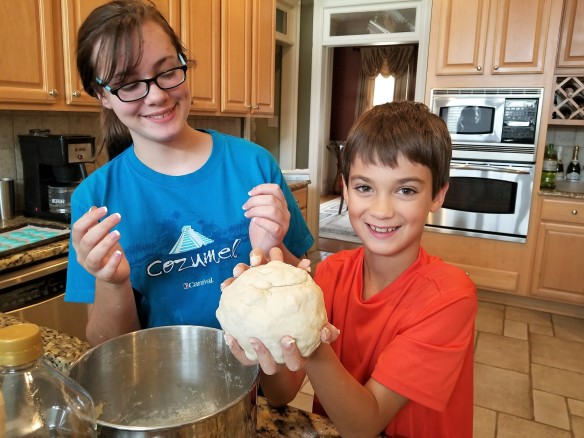 The recipe includes the corrections and adjustments needed to make the king cakes come out successfully.