The seasons turned from summer to fall last week; the weather doesn’t feel any different; it is still hot and muggy. But now it is football season and in Louisiana folks take this sport seriously. Tailgating before LSU college football games is a social ritual; hundreds of folks descend onto the LSU campus for an afternoon party and then to watch the game. “Game Day Sloppy Joes” is an easy and tasty main dish to serve at the picnic.

At LSU, the campers and RV’s descend onto campus several days ahead of the game– folks have parking spots for their RV’s rented for years ahead. On game day, BBQ grills, smokers, picnic chairs and awnings appear all over campus. All the traffic is one way — into campus, to get a parking spot means arriving hours ahead of the game. Taking a picnic lunch or supper is the wise thing to do. Tiger Stadium holds 102,321 people; that’s quite a crowd when a game is sold out.

The highlight of the game to me, was always the LSU marching band’s entrance before the start of the game. They march down the street followed by the coach and team. It’s an awesome event to be in that stadium at night with the deafening roar of the crowd. The school mascot is a beautiful Bengal tiger. For years, he made an appearance at the game, too. I’d just as soon that they leave him in his habitat across campus. Then the game. We’re usually up at the tipsy top of the stadium; better to be at home with a TV where you can actually see the players who looked like tiny ants from our seats.

I’ve been making variations of this “Sloppy Joes” recipe for several years now. I have to say, I really like this recipe. It is extremely easy to make, it is very tasty and the large recipe serves a crowd. Keep the Sloppy Joes heated in an insulated carrier and folks can serve themselves as the afternoon goes along. It is a nice easy alternative to hamburgers, for example. Just prepare the Sloppy Joes ahead. And this recipe freezes well, if you don’t have a large crowd to serve.

Sloppy Joes can be very sloppy to eat; but this version holds together and doesn’t run off the plate. The recipe has onions and celery for flavor and crunch and uses prepared Heinz Chili Sauce (the secret ingredient). A can of tomato paste adds flavor and also helps to thicken the dish. Brown sugar, paprika and apple cider vinegar add a BBQ flavor. I experimented with adding jalapeno peppers – they really add a kick – use with caution and omit if you’re not sure your crowd will like something “hot”.

The point of the onions, celery and jalapeno is to flavor the dish. So I grind them up to a fine consistency with my food processor. If you are not sure that your diners will like the celery crunch, substitute celery seed. However, onions and celery add to the nutritional value of the Sloppy Joes. 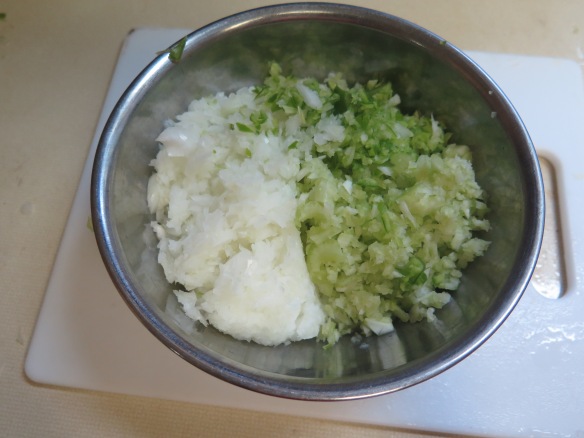 Add the other ingredients, cook over medium heat until the sloppy joes bubble. Stir frequently. Then reduce heat and simmer.

You are ready for a picnic. I might serve the Sloppy Joes in some sort of paper plate and basket combination, so folks can walk around and not spill everything. 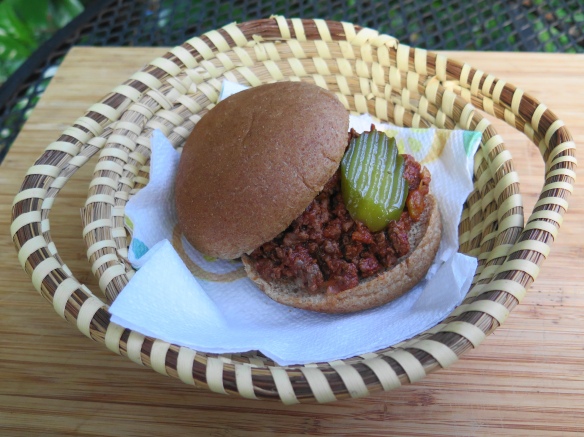 And of course, serve a pickle. Enjoy!

To have a little income during high school, my son worked for the caterer who provided the food, drinks and buffets to the patrons in the LSU box suites during football games. As a young teenage boy, he didn’t always have his act together. One Saturday afternoon, he frantically ran to the room where I was watching T.V. and yelled, “I have to borrow your car to go to work at the game tonight. I need it now — I’m late.” So I inquired, “What’s wrong with your car, I didn’t know it was broken?” He responded, “It’s out of gas.”  He was serious, I couldn’t help but laugh. At least he understood he importance of getting to work on time.

His shoes were another issue. He needed black dress shoes and purchased some at a thrift store.  But he didn’t have black socks and he couldn’t wear white ones so he went without. After walking on his feet for eight or more hours, he feet were were mighty torn up. Guess he learned his lesson.