Part of the fun part of a family vacation is the unplanned adventures which happen along the way. But what is more frustrating that taking a family road trip vacation and finding that the family navigator can’t read a map? I discovered the answer for modern-day travelers. Like may other families we’ve dropped the maps and rely on GPS tracking systems. Last summer we tried to find an address for a Fed Ex store in an unfamiliar urban city and listened to our three GPS systems shout contradictory instructions at the same time. 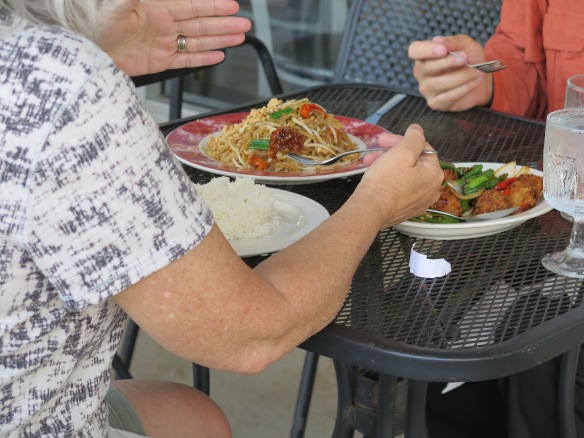 We found the Federal Express Store just before it closed and then noticed a Thai restaurant down the street in the same strip shopping center. We decided to stay and eat supper there.

Trying to navigate through the busy multi-lane streets of the Tysons Corner suburb of Washington D.C. was challenging. All the other vehicles seemed to know where they were going and at a fast rate of speed. It was very comical to hear our phones and car GPS systems shouting different driving directions at the same time. I guess we can compare I-Phone vs Android vs Honda GPS systems. All eventually got us to the Fed Ex store.

We decided to eat supper at the Thai Restaurant in the strip shopping center before continuing on into Washington D.C and the Kennedy Center for a concert that night. It was a spontaneous decision; what a delightful surprise. 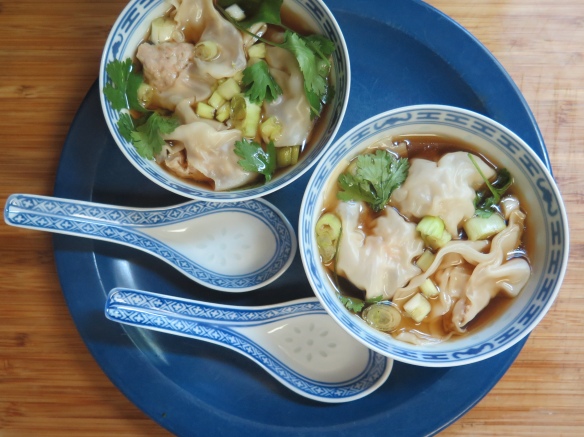 The family owned Thia Pilin Restaurant served delicious food. According to their WEB site, “The restaurant has been in business for over 20 years, opening our doors in 1989.  The food we share with the community is from our own traditional Thai home recipes.”  (//www.pilinthai.com/)

Thia Pilin is an unpretentious restaurant; just to show that looks can be deceiving. There was a small casual seating area inside the restaurant; the seating flowed to outside the restaurant and there appeared to be a large carry-out order business. The food was tasty and I highly recommend it if you visit Tysons Corner in suburban northern Virginia.

I ordered Wonton Soup. It was a soothing soup; just what I needed after driving a long day.

Last week I ate at a Thai restaurant in Harrisionburg, Virginia, in the Shenandoah Valley while on another visit to Virginia. The restaurant was called “A Taste of Thai.” I ordered Wonton Soup again and their soup was delicious, too. And I found that both the Thai Wonton Soups had a different taste than Chinese versions. Perhaps it’s the cilantro in the soup? The beef broth? Neither versions were sweet or sour as compared to some Chinese Wonton Soups.

That peaked my interest in making the soup myself. This time I asked a few questions about how the soup was made and got a general idea of what to do. I am not familiar with the cuisine of Thailand. The internet and several books also provided ideas. Here’s my soup. Compared to Thai Pilan’s soup, mine (below) looks about the same.

The “Taste of Thai” restaurant version was made with homemade beef stock. The waitress couldn’t say how it was made other than the cooks added many things when making the broth which was just excellent. I decided to skip this step and use purchased beef broth rather than to figure out a homemade broth.

The wonton filling at “A Taste of Thai” was shrimp and ground pork. According to the internet, this is the traditional filling for Thai Wonton soups. The “Taste of Thai” soup had fried garlic floating in it as well as cilantro leaves, bok choy and green onions. I’m sure there were other ingredients, too, in the “Taste of Thai” soup. I added a little fish sauce and soy sauce and some seasonings in the wonton filling. Yum.  My final soup is based on several recipes that I combined from the internet and from what I remember at the restaurants.

The “Taste of Thai” soup contained fried garlic which I’ve never seen in a soup. I found an many internet references which give an pictorial descriptions of making fried garlic. So why copy it? A You-tube video link is given in the references.

The filling for the wontons consisted of ground pork, finely chopped shrimp and seasonings of fresh garlic, fresh ginger, white pepper, red pepper flakes, soy sauce and fish sauce. I used one of my favorite kitchen gadgets, a garlic press to mash the garlic and fresh ginger and adapted the ingredients to my kitchen cupboard.

After the filling for wontons was made, the 3″x 3″ pastry wrappers were stuffed. All the recipes on the internet called for about a teaspoon of filling per wrapper. That didn’t seem like much filling. But the recipes were correct; trying to pile on more filling resulted in it squeezing out the edges of the wrappers. They wouldn’t seal.

I found that my recipe made about 32 wontons; that’s alot of wontons! These were boiled in boiling water for about 3 minutes; enough time to cook both the filling of pork and shrimp and the wonton wrappers themselves. 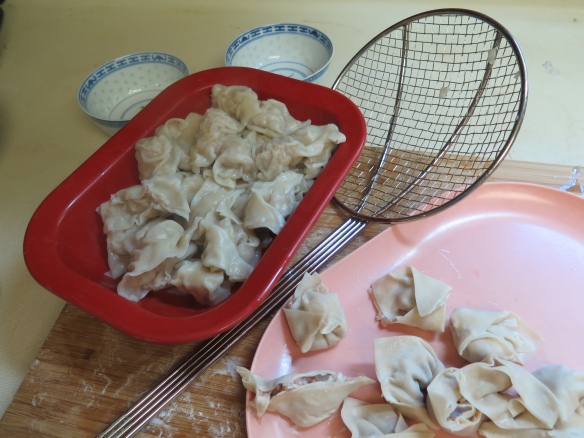 To finish the soup, the beef broth was heated, adding a little soy sauce and fish sauce. I placed 1/2 cup broth in each soup bowl along with three wontons, fresh cilantro and sliced green onions. I didn’t have bok choy or fried garlic today, but those would make nice additions. With a little larger soup bowl, each serving could contain four wontons making a recipe to serve 8 people for an appetizer course. 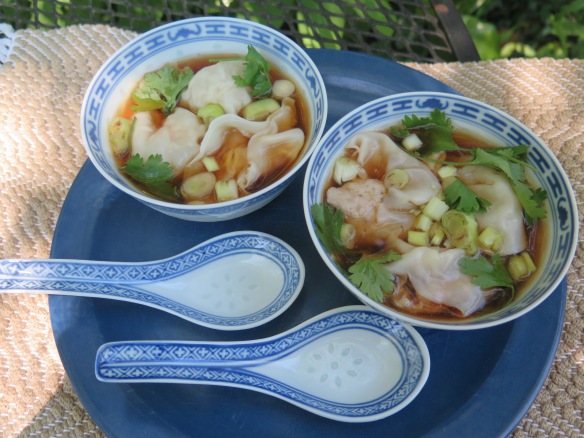 But you can guess the rest. The two of us ate almost all the wontons and soup in one meal!

And now on to the rest of our vacation trip last summer. After the supper at Thai Pillin Restaurant, we traveled into the city of Washington D.C. to the Kennedy Center for a concert featuring bluegrass artist Chis Thile and friends. What a treat. 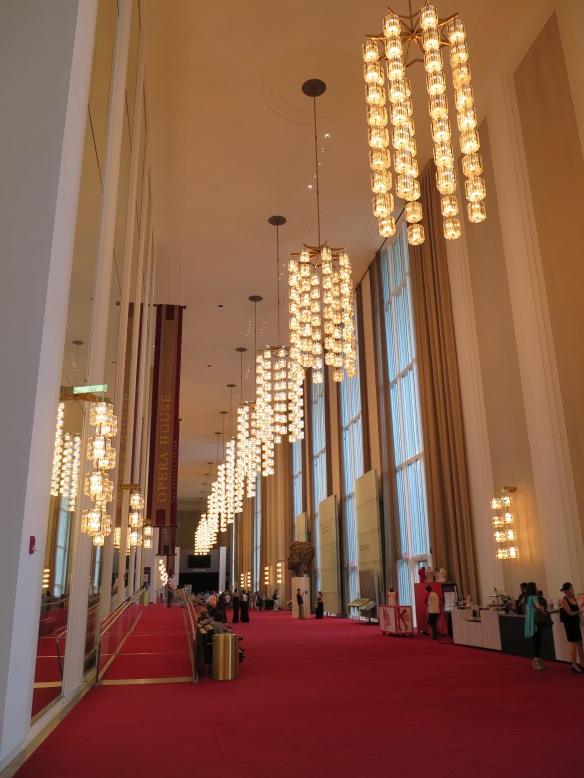 And how fun it was to notice a photo advertising an upcoming concert for “House of Cards” by composer Jeff Beal.  The composer (an Eastman graduate) had visited Eastman School of Music the prior year and conducted the concert with the Empire Film Music Ensemble (Eastman School of Music).  This poster was made from a photo taken at the Eastman concert. Now Jeff Beal was performing his music at the Kennedy Center with another ensemble according to the poster. 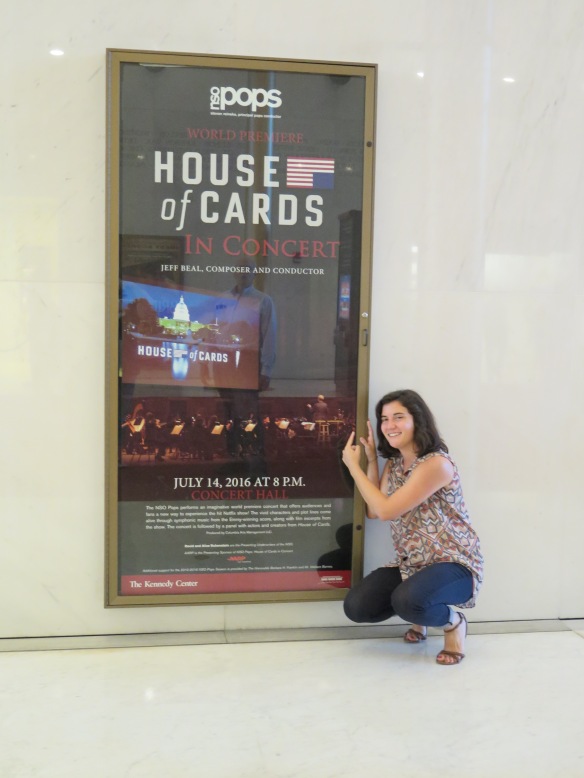 My daughter who played the upright bass in the Eastman concert, was standing with her bass just outside the photo when it was taken at Eastman School of Music. Here she is pointing to herself. Small world. Here is a You-Tube video of the Eastman concert with my daughter in the orchestra (far right). http://www.youtube.com/watch?v=8D85UE6yP88 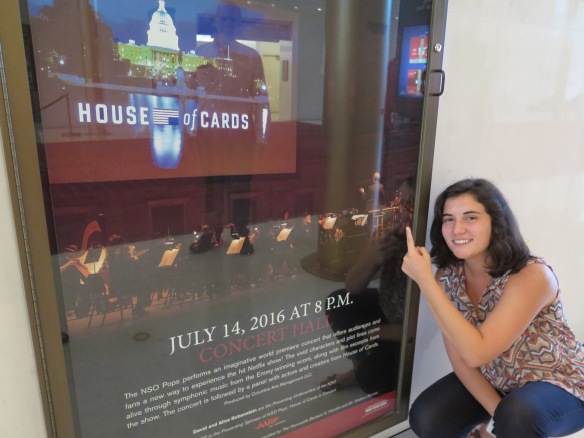 Family vacations can be enjoyable if you let them be. Take away the stress and try some spontaneous adventures. See what happens. I learned to love Thai Wonton Soup and brag about my daughter.