Here’s a favorite family soup, “Loaded Baked Potato Soup.” It is a soothing soup; welcome on a cold winter night. When I bake potatoes, I often bake a few extra and then make this creamy, flavorful soup. There’s something about this soup made with potatoes — a comfort food — which is very satisfying.

My Baked Potato Soup follows a simple recipe. Then when serving the soup, add whatever toppings you desire–sour cream, cheddar cheese, green onions and creative toppings such as broccoli to load the up the soup. The soup shown here includes bits of ham for flavor; this evening I made a variation with bacon. Or you can omit the meat for a vegetarian version.

The key to making potato soup is to use potatoes with lots of flavor. Sounds simple, but some potatoes have very little taste. I have found that the giant, over-sized Russet potatoes sold at our local grocery store have the best flavor–so I always purchase these. Stick with what works. Here are three baked, left-over potatoes. They weight 1 lb 14 oz.

Russet potatoes are mealy, they tend to fall apart after baking which is what you want in a creamy soup. I leave some of the skin on, because most of the flavor and nutritional value resides in the skin.

For seasonings, I use an onions, pepper (either white pepper or black pepper), ground thyme and Tabasco sauce. Nothing complicated–but enough to add flavor and zip. I use sodium-reduced Swanson brand chicken broth in addition to low-fat milk which adds flavor. Many recipes use cream or half-and-half. I find that this soup, made with low-fat or skim milk, has plenty of flavor and not as many calories.

To make the soup, first bake and peel the potatoes. When potatoes bake, they release steam, so poke holes all over the potatoes with a fork or knife to let the steam escape. Coat each potato with a little peanut oil prior to roasting in the oven. Bake in a hot, 400 degree, oven for an hour. For this recipe I use about 2 lb of Russet potatoes which is 3 giant potatoes. This makes 6 servings.

After the potatoes cook, peel and dice. I usually mash one of the potatoes and leave the peelings on about half of the potatoes. A potato ricer, one of my favorite kitchen gadgets, works for masking the potatoes; but these baked potatoes usually just fall apart. 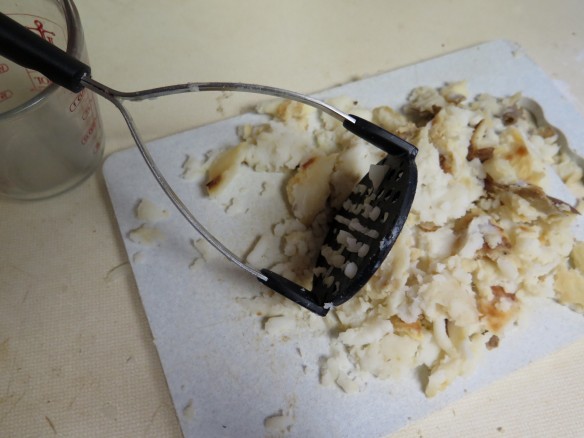 Saute the onions until translucent. Next add the ham and saute a few minutes longer. If using bacon, I dice 4 pieces of bacon, fry until crisp, and then remove the bacon and most of the drippings. Saute the onions in just a little of the bacon drippings.

Next make a cream sauce with milk, flour and margarine. Here are the ingredients for the low-fat cream sauce.

This is the same white sauce or cream sauce used in other blog posts, but it is easier to make. Add the margarine to the onions and ham on the stove, then the flour, then stir in the milk. 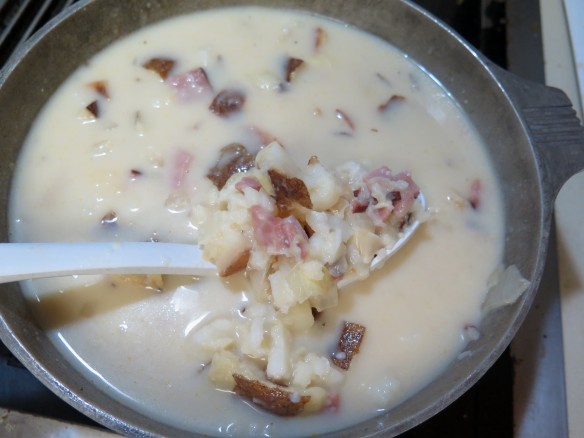 Add in the potatoes, chicken broth and seasonings and heat everything through. That’s it. Enjoy this soup in on a cold, rainy or snowy night!