On a road trip last week from Louisiana to Washington D.C. to upstate New York and back home, every town we stopped at along the way had flags and banners flying for the Fourth of July. It struck me that even though we have differences, we all share the same beginnings of our country. Patriotism was everywhere. In the heart of the Shenandoah Valley, we took a lunch break at a family-style restaurant in a 200-year-old building, “The Thomas House.” It is in a part of our country which was settled around the time of our country’s founding.

You won’t find “The Thomas House” restaurant listed in any advertisements. It is purely a restaurant for the local folks. It serves Southern menu items that a mother or grandmother would cook in a cafeteria style setting. If you want true local, Virginia flavor — think about stopping here in Dayton, Virginia. And it is a step back in time to our country’s founding days. One of our favorite entrees is the meatloaf. I’ve provided a recipe for an old-fashioned meatloaf–similar to one that is served here.

The Thomas House Restaurant and Building

The oldest part of the Thomas House was built in 1818 by Alexander Herring and his wife Abigail. Harrington’s grandfather, Lord Benjamin Herring, was an English nobleman who settled in the Shenandoah Valley in 1737 and the Thomas House land was part of the original land grant. The best claim to fame of this family is that their daughter, Bathsheba, married Captain Abraham Lincoln and they are the grandparents of President Abraham Lincoln. A plate hanging on the wall of the restaurant best tells the story of the building.

The building actually has 26 rooms — for years it was used a boarding house for the near by Shenandoah College and Conservatory of Music. This school merged with Shenandoah Music Institute in Winchester, VA, in the 1960’s and is now know as Shenandoah University–moving to Winchester.

The Wilbur Thomas’ purchased the building in 1942. Mrs. Lottie Thomas opened a bakery and eventually a restaurant which the couple operated for years. My friends remember smelling the wonderful aroma of baked donuts and other breakfast breads as they stopped on their way to high school in the morning.

The restaurant changed owners several times and In the 1990’s the restaurant and building were sold again. The owner, Charlie Pennybacker who is now in his 70’s, continues to operate the restaurant in a similar fashion–good Southern home-cooked meals. Often you will notice the proprietor sitting on the front porch, eager to visit with anyone who comes his way.

The restaurant is located in the back of the building, down a beautiful garden walkway.

The menu is written on a blackboard and changes daily. Not bad prices. 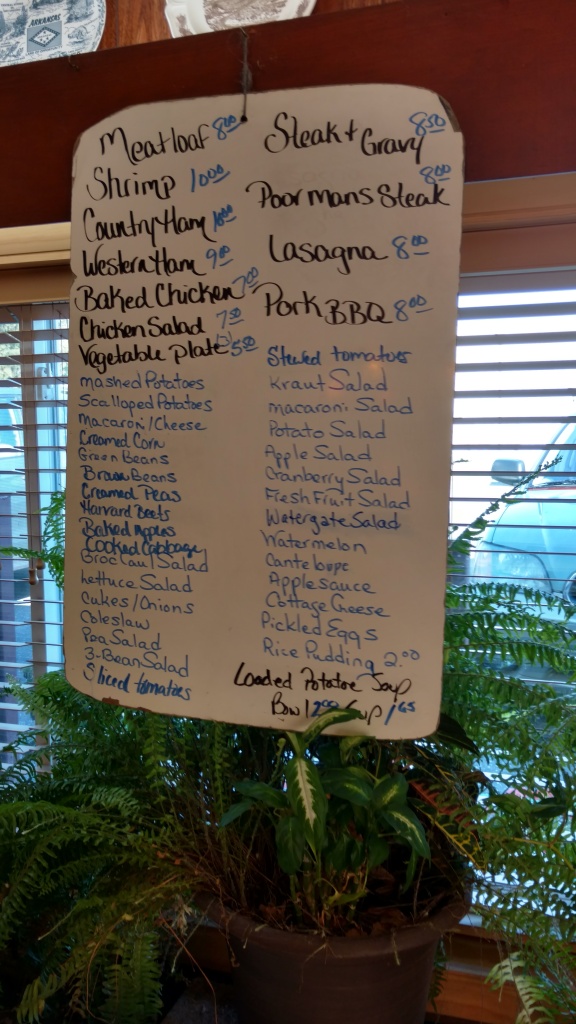 Pick your selections while walking down the cafeteria-style serving line. The food is cooked and served by local Mennonites who work in the restaurant. 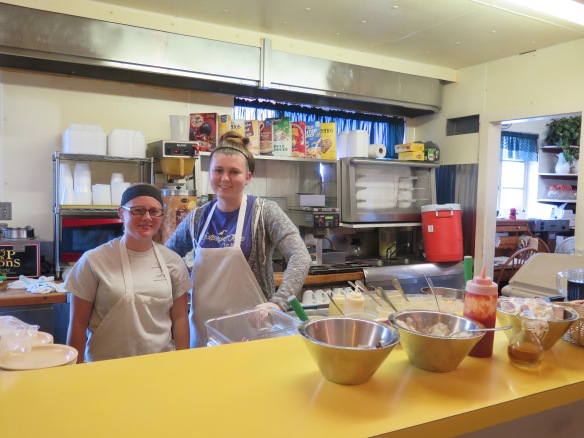 We particularly liked the meatloaf. The proprietor told me his secret is putting barbecue sauce in the meatloaf. I prepared my take on the recipe when returning home. It was delicious. For the meatloaf, I used very lean ground beef, 93% lean/7% fat. It wasn’t too dry, as the barbecue sauce added moisture.  All the foods on the menu were sweet with lots of added sugar (the Southern way!). If you don’t like this much sweetness, omit the sugar from the ketchup topping.

Enjoy this easy meatloaf. And we remember our heritage on the Fourth of July!

Charlie Pennybacker and his Thomas House