Every year I make some healthy New Year’s resolutions: such as eat more vegetables. I got off to a good start when my mother-in-law came to visit. She raved about a Brussels sprouts recipe–the best she’d ever eaten–and bought me two pounds fresh Brussels sprouts at Cosco’s to make the point. 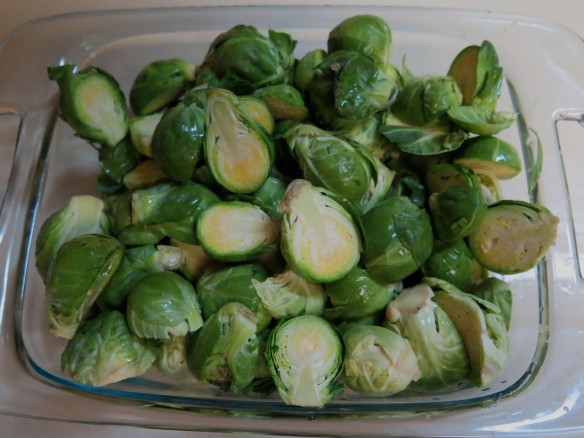 In the Roasted Brussels Sprouts recipe, the sprouts are tossed in olive oil and seasonings and roasted in the oven until tender. The cooked vegetable is seasoned and delicious! Two pounds is alot of Brussels sprouts but they were hard to resist.

Brussels sprouts is an interesting vegetable. They are small buds that grow on an upright stalk between the leaves–the leaves have been cut off in this photo. Here are fresh Brussels sprouts for sale at the Rochester, New York, farmer’s market in October. 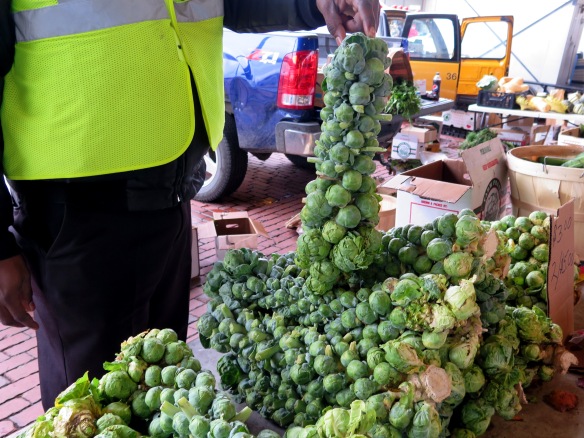 Although Brussels sprouts have not been studied individually, a recent research study published in the Journal of the Academy of Nutrition and Dietetics found that women who ate more foods from the cruciferous group had lower circulating levels of inflammatory factors in their blood stream. The research studies these days have become very sophisticated with ability to measure trace levels of factors in the blood stream.

Brussels sprouts are good sources of many vitamins including Vitamin C, Vitamin K, folic acid, Vitamin B6, many minerals and soluble fiber

Be careful if you are taking anticoagulants such as warfarin(Coumadin). The high Vitamin K content of Brussels sprouts can interact with the warfarin in your stomach and prevent its absorption into the blood stream which then results in lower levels of the anticoagulant in your body.

Here are most of the ingredients (pepper is missing) for the recipe. The recipe is a simple one to make. Mix everything together, spread on a baking sheet and roast in a hot oven until tender.

I made several ingredient substitutions. The original recipe calls for the Italian bacon, pancetta. My mother-in-law substituted a little chicken and beef bouillon for seasoning. She likes the crystal bouillon; the cubes, crushed, worked well. I did not have a shallot so used a red onion.

The Brussels sprouts are roasted in a hot (425) degree oven for 20-30 minutes until they just begin to char. These are roasted for 30 minutes (a little too long–I got sidetracked). Spreading parchment paper on the baking sheet made for easy clean up. 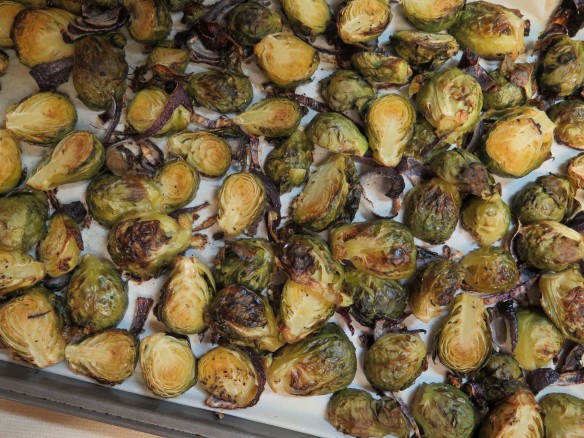 This recipe gave me the chance to use one of the handy kitchen gadgets I’d received as a gift over the holidays: a Herb Stripper. It works great for getting the leaves off the stems of herbs such as thyme and rosemary. 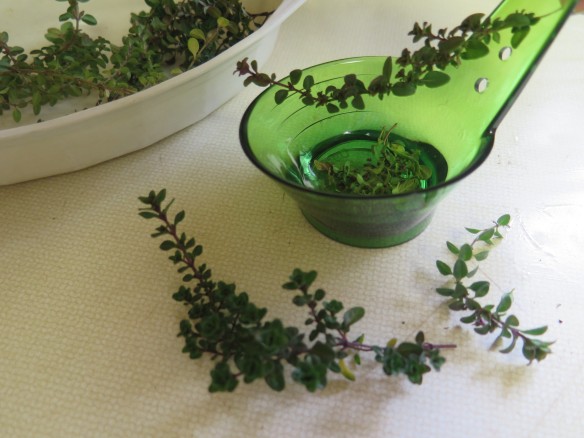 I was surprised at the wealth of research which points to a strong association of eating cruciferous vegetables (Brussels sprouts, broccoli, kale, cabbage, cauliflower–and other similar foods such as bok choy, napa cabbage) and lower incidences of many cancers, cardiovascular diseases and other chronic diseases. 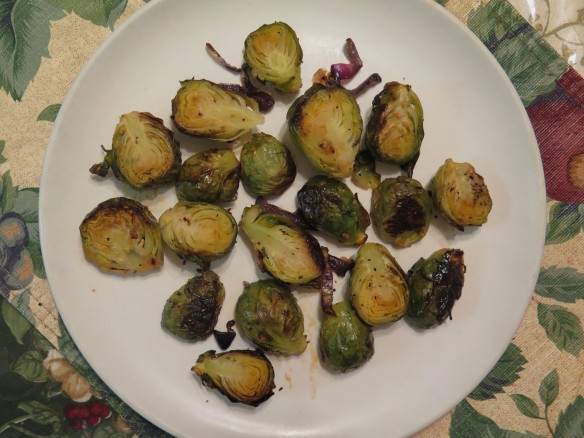 What’s New and Beneficial about Brussels Sprouts.  he World’s Healthiest Foods in © 2001-2015 The George Mateljan Foundation, All Rights Reserved whfoods.com/genpage.php?tname=foodspice&dbid=10

“Cruciferous Vegetable Intake is Inversely Correlated with Circulating Levels of Proinflammatory Markers in Women” by Yu Jiang and et. al. in the Journal of the Academy of Nutrition and Dietetics. May 2014.