Passover begins with a Seder service, which tells of the story of the exodus of the Jewish people from Egypt, followed by an elegant meal. The highlight of the meal for me is always Chicken Soup with Matzoh Balls. The matzoh balls should be light and airy; they should float-not sink. This year I’m on a time crunch, here is a simple soup with amazingly airy matzoh balls and fresh vegetables for flavor. It is easy to make and I think it’s pretty good. 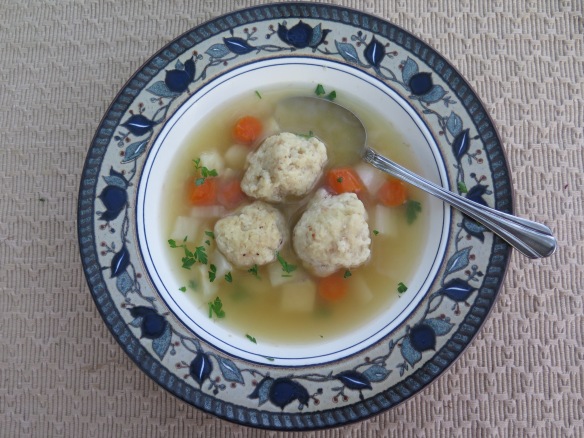 Ideally, the chicken soup for a Seder meal during Passover is made from scratch, simmering the chicken pieces with onions, celery and carrots for several hours to develop a rich, flavorful broth. There are plenty of blogs and WEB sites with good recipes for this process. Since Passover Seder is on Monday evening this year and I’m on a time crunch, I am opting to skip this step and use purchased chicken broth.

Purchased chicken broth is very salty, even the reduced-sodium brands contain a fair amount of sodium. As the soup simmers on the stove, it can reduce and become even more salty. On the other hand, salt-free broth is very bland. Something in between is needed. I’m using a combination of Swanson 33% Reduced Sodium Chicken Broth and Low-Sodium Chicken Broth which I found at Fresh Market.

One of my favorite soups is a “root soup” made using winter vegetables with roots (shown left to right): celeriac root, shallots, carrots, parsnips and turnips. It’s a very flavorful and hearty soup. While the “main event” of the soup during Passover is the matzoh balls, a few of these vegetables mixed in adds flavor, color and interest to the soup. 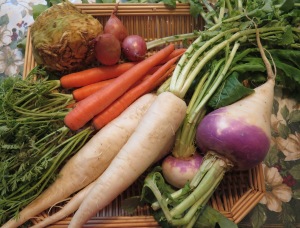 Any combination of these vegetables can be used, and not alot are needed. I diced the vegetables, simmered them in the broth for a half hour or until tender. Then I removed the vegetables with a strainer, set aside until ready to serve, reheated and added a few to each serving of soup. 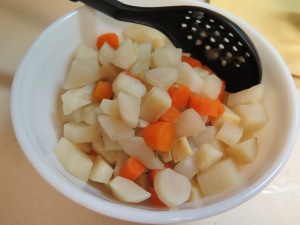 Ideal matzoh balls are airy ones; they should float to the top of the broth/water while cooking rather than sink to the bottom of the pot. To make matzoh balls “light and airy”, separate the egg yolks and whites, whip the whites until they just begin to make stiff peaks, then very carefully fold the whites back into the egg yolks along with the matzoh meal. Many recipes call for refrigerating the matzoh batter for about a half hour, however, I add the matzoh balls to the boiling broth (or water) immediately.

This recipe makes 18 very small matzoh balls, shown here (floating). Form them about the size of a small spoon. Wet your hands and wet the spoon so the matzoh balls will slide into the broth or water. I am expecting 10 people at our Seder dinner, so I plan to make 12 matzoh balls, making them a little larger and serving one per person. (Someone will want a second helping.) 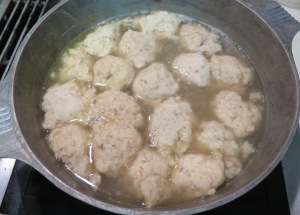 Make the Matzoh Balls (while the vegetables are cooking)

This serves 8 to 12 people. There may be extra broth, extra vegetables. Refrigerate and serve as left-overs. Enjoy!