Burr, It’s quite chilly here in Louisiana. Hard freeze in the low twenties and upper teens. The bird bath is an ice cube. Nothing compared to much of the rest of the country, but it’s COLD for us.

Much of my garden has wilted, except for the rosemary. It appears that the cold weather here didn’t even touch it. This rosemary plant is very aromatic, adding new grow. It’s an excellent time to cook with it, and I found an interesting recipe idea. 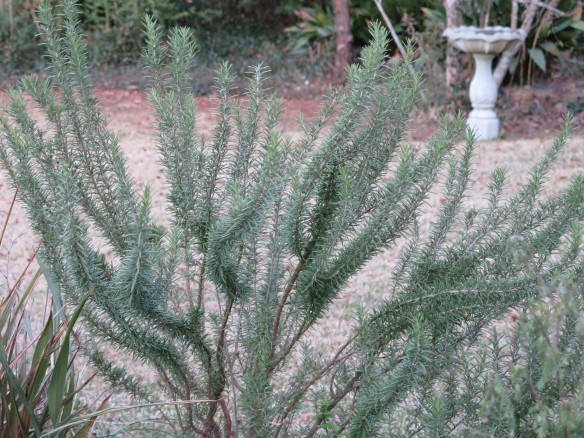 This rosemary plant has been growing in my garden for several years, I really can’t recall how long. It requires very little care and I often forget about it. I seem to have found the right garden spot. It’s in an elevated bed, so gets lots of drainage. It’s on the north side of our house, so gets shade. That’s probably it’s saving grace, as the shade protects the bush from the hot, hot summer sun and the house protects it from the winter winds. I fertilize and water it only when caring for other plants around it.

Some of the stems have dipped down to the ground and the woody parts of the growth have rooted. When it warms up just a little, I’m going to try to move these cuttings to another location.

Rosemary gives a wonderful aroma to dishes, especially chicken, pork and beef dishes. I’ve added rosemary to breads, as well. In the winter, the aroma is very intense and can be minced and or added directly to dishes. Supposedly the aroma is most intense just before the tiny white flowers form in the spring. In the summer, I’ve tried dehydrating the rosemary in the microwave oven to increase the aroma.

Lemon Chicken with Rosemary and Garlic

In the past, I’ve made a recipe for Lemon Veal with the veal marinated in lemon, rosemary and garlic. Then it is pan sauteed. It’s delicious, but quite pricey. So I substituted chicken, using boneless, skinless chicken breasts.

My neighbor gave me a lemon he’d grown that was the size of an orange. I’d never seen anything like it. The juice was very mild and one lemon yielded a cup of juice. Wouldn’t mind having a few more of these lemons; but the cold weather probably has ended the crop.

I added lots of garlic–six cloves–and a tablespoon of rosemary, some of the lemon juice and marinated the chicken for several hours. Then I sauteed the chicken breasts in a little olive oil with the garlic and rosemary from the marinade. Lastly I added some chicken broth to make some gravy.

This makes a low-fat and healthy way of preparing chicken. And a good start on my New Years Resolution of eating wiser.

1 thought on “Does Rosemary Grow in Louisiana?”