Do you ever purchase an ingredient, forget that it is somewhere on your pantry shelves and purchase it again? This is how I wound up with three bottles of Steen’s Cane Syrup. What can a person do with three bottles of molasses-flavored syrup? I made ice cream — a great summertime dessert. Yum. And I added candied pecans using pecans left over from last winter’s holiday baking. This is a low-fat ice cream; my recipe uses whole milk rather than heavy whipping cream. Lite and delicious.

Steen’s cane syrup is a sweet molasses-type syrup made from raw sugar cane. Charlie S. Steen began manufacturing the syrup in a small mill in 1910 in Abbeville, Louisiana, in Vermilion Parish, which is south of Lafayette, Louisiana. The area was settled by descendants of the Acadians from Nova Scotia who moved to the area around 1766 to 1775. You can’t get much more Cajun than this area. It appears that the fourth generation of the family still operates the sugar cane mill in much the same manner as the original one.

In C.S. Steen’s process, the raw sugar cane from the fields is ground up and the juice is extracted. This is simmered in large open kettles until the proper consistency is obtained. The syrup is then bottled or canned in jars with his bright yellow label.

Steen’s process differs slightly from molasses. When making molasses, the sugar cane is boiled until it crystallizes. The crystals are centrifuged out to make pure sugar and the remaining syrup is molasses. Thus, Steen’s syrup is sweeter than molasses because it is 100% cane syrup with no refined sugar removed and the flavor is not quite as intense as molasses. It made for a perfect batch of ice cream.

Here is a sugar cane field at harvest time to give an perspective on the size of the cane.

I love ice cream in the summertime and decided to make custard ice cream using my extra Steen’s Cane Syrup.  For crunch and flavor, I added candied pecans as a topping. This is a low-fat recipe. I used whole milk rather than heavy whipping cream in the ice cream. It still turned out creamy and smooth; you wouldn’t know it is a low-fat version. If you wish, you can use half-and-half cream or heavy cream for all or part of the whole milk, but I didn’t find this to be necessary.

Although it is a little more effort, I believe that an egg custard-type ice cream has the best flavor and consistency of any ice cream. This recipe set off the molasses-flavor of the Steen’s Cane Syrup very well. It uses just four ingredients — milk, egg yolks, Steen’s Corn Syrup and vanilla extract.

To make the recipe, first scald the milk (to denature the proteins). Add the milk to a heavy medium-size pot on the stove and heat until it steams — the milk should not boil. Set aside off the stove. Blend the egg yolks and Steen’s Cane Syrup together with an electric mixer on medium-high speed until the mixture is creamy and frothy. Very slowly, add several spoons of the hot milk to the egg/milk mixture. Stir constantly. Then continue to add more hot milk. When about half the milk is added, pour this mixture back into the pot with the remaining milk. Return to the stove and cook over medium heat until the mixture thickens slightly. Stir constantly. If you are careful, the ice cream mix will not curdle.

Add the vanilla extract, remove from the heat and chill. Then process in an ice cream mixer until frozen. This made a very soft ice cream, it really did not entirely freeze — I placed the ice cream cylinder in the freeze to completely freeze.

I still have an old-fashioned Waring “Ice Cream” parlor which is in working condition. I used it to freeze the ice cream – it is just the right size for a small batch. I think this machine is no longer manufactured; perhaps you can find one on E-bay. 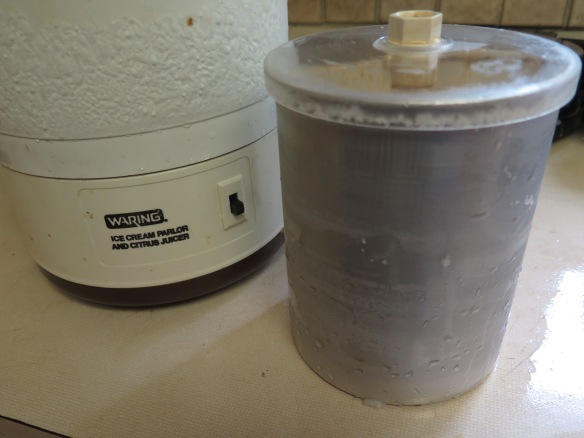 Making candied pecans is a simple process. Just don’t leave them alone on the stove. I used some pecans which I had placed in the freezer — left over from last winter’s holiday baking. (And Bergeron’s shelled pecans are a Louisiana product, grown in central  Louisiana.) 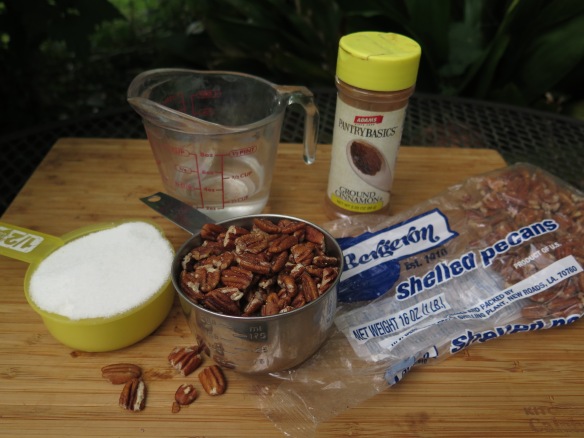 Add the ingredients — pecans, sugar and water — to a small skillet. Cook on the stove on medium-high heat, stirring constantly, until the water evaporates and the mixture thickens and browns. 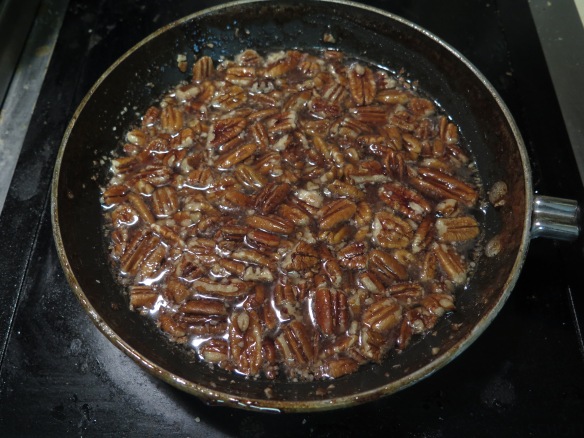 Then remove from the stove, stir in cinnamon and spread out in a single layer on a baking sheet lined with parchment paper. Now, you’ve just made candy!

What do you do with the egg whites? I used them to make some waffle cups. But that was alot of effort and these cones turned out chewy. I’ll find another use for the egg whites next time — perhaps added to omelets.

In any case, the ice cream and candied pecans turned out to be delicious! A great summer treat. 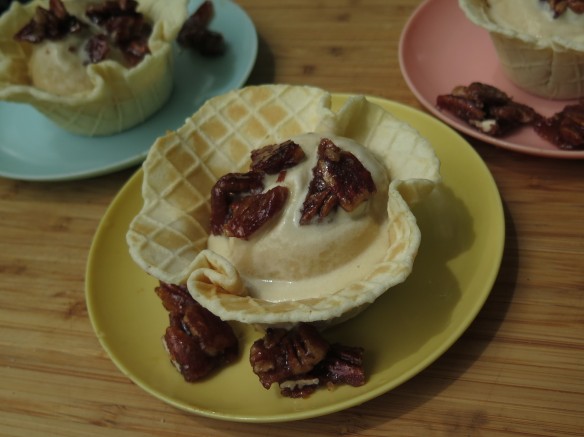 Here’s another view of a Louisiana sugar cane field in June on a trip to Pierre Part, Louisiana, deep in the heart of Cajun country. This was taken on one of my last trips there as a home health hospice nurse last summer. The billowy clouds were striking against all the miles and miles of sugar cane fields. It seemed like another world as I drove along. 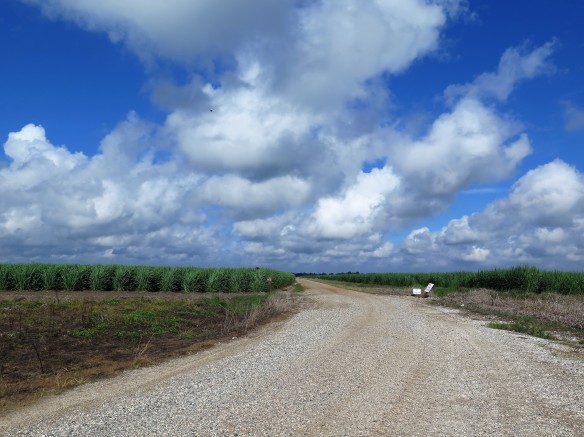