It’s October — the season for pumpkins and gourds. I’m beginning to see small pumpkins for sale in grocery stores and farmers markets. These pumpkins are called sugar pumpkins and are best suited for baking and eating– rather than the huge ones sold for carving and decorations.  A recipe for Pumpkin Snickerdoodles caught my attention. Adding pumpkin puree to cookies is a unique way to use  pumpkin pulp; I thought I’d try to make a batch.

A Snickerdoodle is a traditional American sugar cookie. The difference between these cookies and sugar cookies is that snickerdoodles are rolled in cinnamon sugar before baking. Also, the cookies contain cream of tartar and baking soda which causes them to puff up when baked and then flatten out — leaving a chewy cookie with a cracked, wrinkled surface.

I found several snickerdoodle recipes which were adjusted to add pumpkin puree and pumpkin pie spices. The result was a spicy cookie with a hint of pumpkin flavor which  made a nice variation to a plain sugar cookie fitting of the autumn season.

Canned pumpkin puree is readily available in stores. But the difference in flavor between canned and fresh pumpkin is remarkable. It’s worth the effort to use fresh pumpkin pulp. One small sugar pumpkin will yield enough pulp for several recipes — the cookie recipe only uses a small amount; get ready to make several dishes.

I purchased a couple of these small, sugar pumpkins and cooked them. The smaller one weighted 1 lb and 12 oz and after cooking it, I had 1-3/4 cups pulp. The larger pumpkin weighted 2 lb and 12 oz. In addition to more flavor, these smaller pumpkins have less fiber in the pulp to deal with.

It really isn’t difficult to cook a pumpkin (or roast it) and scoop out the pulp. This time I  roasted some baking potatoes for supper along with one of these these pumpkins on the same baking sheet. To roast a pumpkin, halve it lengthwise and remove the seeds — an ice cream scoop works well. Save the seeds to roast later.

Roast the pumpkins halves in the oven at 350 degrees, cut side down (rub with oil first) until they are tender and can easily be pierced with a knife — about 40 minutes or longer for larger pumpkins. 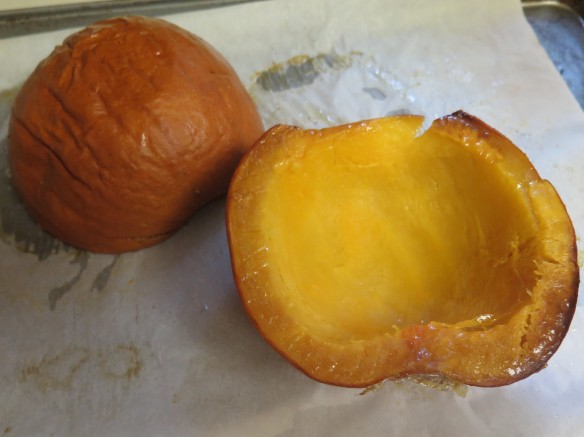 Scrape out the pulp removing the pumpkin skin. The pulp is full of strands of fiber. Process this in a food processor to make a smooth puree. 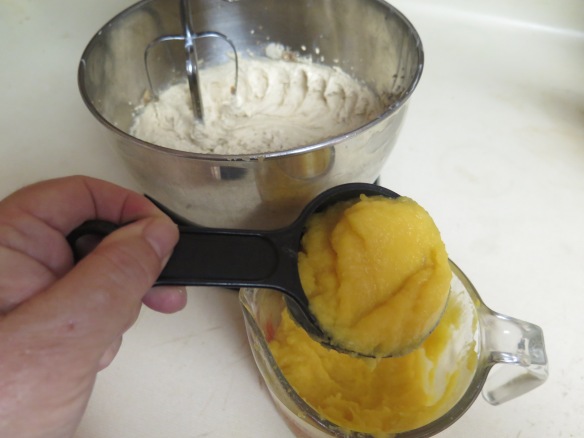 The recipe called for only 1/4 cup pumpkin pulp — just enough to give an interesting flavor.

It seems like it should be easy to make these cookies — just add pumpkin pulp to a sugar cookie recipe — but I had trouble with the texture of the cookies. I made several batches trying various adaptions to a traditional snickerdoodle cookie recipe to accommodate the pumpkin pulp. (All the cookies were quickly consumed.) The idea is to have the cookie puff up while baking as the baking soda and cream of tartar react. Then the center sort of drops. It is supposed to be a chewy cookie rather than a cake-type cookie. The pumpkin pulp adds moisture which causes it to become more of a cake-like consistency. To help limit the moisture in the recipe, I used only an egg yolk rather than a whole egg.

I tried several other variations, for example changing the amounts of baking soda and cream of tartar to get a chewy cookie. In one batch, I skipped the egg yolk entirely. I also tried different oven temperatures and decided that you don’t have to form the cookie into a perfect ball before rolling in the cinnamon sugar. It is best to handle the dough as little as possible.

To add flavor, I used pumpkin pie-type spices and dark brown sugar. Just a hint of caution here — a little of spice goes a long way – don’t over do it. I prefer to add individual spices rather than prepared pumpkin spice and used cinnamon, nutmeg, ginger and allspice. (My favorite ones.)

Once the cookie dough is made, chill it for about 30 minutes. Then scoop it out — flatten slightly and coat with cinnamon sugar. I baked the cookies in a 375 degree oven only until just browned — about 8 minutes. Don’t over bake.

After cooling on a wire rack, store the cookies which you don’t eat in an air tight cotainer.

And never mind that these cookies are’t really chewy. They are soft and spicy – good for a snack or dessert — delicious.