I’m starting out the New Year with a very traditional New Orleans’ recipe for “Shrimp and Grits.” We ate this dish several years ago on Christmas morning at a little cafe in the business district of New Orleans. The grits were creamy and smooth; the shrimp seasoned just right; about the best I’ve eaten.  I’ll begin the New Year with one of my favorite recipes that I’ve learned to like since moving to Louisiana.

It you ever need to travel during the holidays; Christmas Day is a slow time for airports and flying. This particular year we flew home early Christmas morning and landed in New Orleans after visiting and celebrating an early holiday with our family on the Eastern states. We decided to head to the Central Business District of New Orleans (close to the French Quarter) to eat; it was a very quiet day in the city on Christmas morning.

Most restaurants were closed but we found brunch in a little cafe close to Baronne Street in downtown New Orleans. “Sauteed Shrimp” is a very a traditional New Orleans dish–the peeled shrimp are sauteed in butter with mushrooms, creole seasoning and dash of wine and Worcestershire sauce. French bread is included with the meal for dipping in the shrimp juices.

This dish is served all year long in Louisiana– at holidays, at buffets with friends or any type of festive dinner. In a popular variation, the peeled shrimp are broiled (rather than sauteed) in the oven in butter, creole seasonings and Worcestershire sauce. I’d omit the wine (it will boil off) and mushrooms and substitute lemon juice instead adding the sliced green onions at the end of broiling. This variation is called New Orleans’ Style “Barbecue Shrimp.”

Including grits on restaurant menus is becoming more fashionable and popular in recent years in place of rice or potatoes. Often the grits are paired with shrimp for a dinner course. At one fashionable restaurant meal, grits were served with chicken rather than rice. It takes a little time to acquire a taste for grits–I never saw them served in northern states; so give grits several tries to get accustomed to the taste and texture.

A friend prepared a variation of “Shrimp and Grits” for a dinner party last year and she shared the recipe with me. Here she’s serving up hot cider with wine. 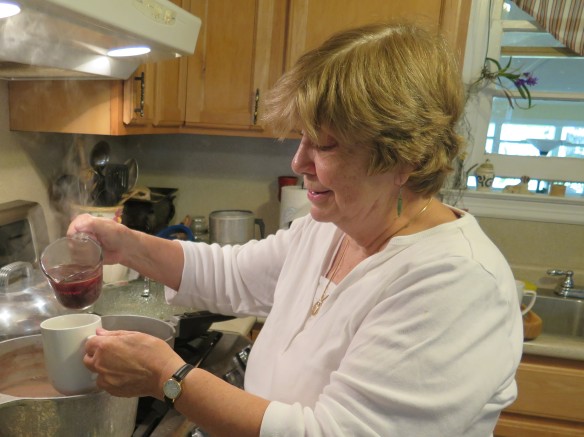 The little alligator wine holder that a guest gave her for Christmas will come in handy for storing some of her wine.

Back to the grits. If you’ve never cooked with grits, use the quick cooking (5 minutes) grits. Grits swell up when cooked, they must be stirred constantly while you slowly add them to the boiling cooking liquid (in this recipe chicken broth was used) to avoid lumps of hard grits. 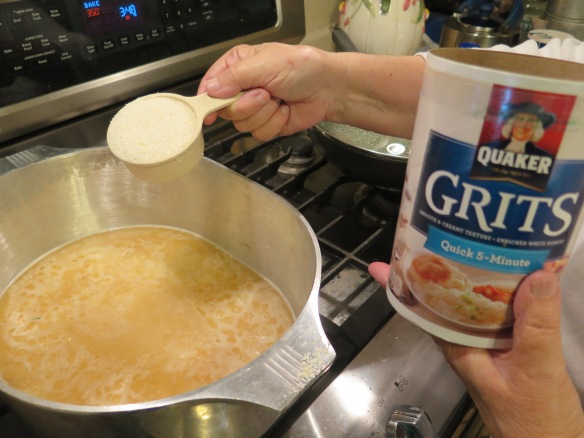 For the shrimp, first Marie sauteed green onions including the tops and sliced mushrooms in lots of butter.

Marie seasoned the peeled, raw shrimp with Tony Chachere’s Creole Seasoning. (When I prepared the recipe, I used frozen shrimp (51-70 count) which were defrosted first.) These were added to the sauce pan and sauteed until the shrimp were pink and done. A little cooking wine and Worcestershire sauce were added.  Very simple and quick; just don’t overcook the shrimp. 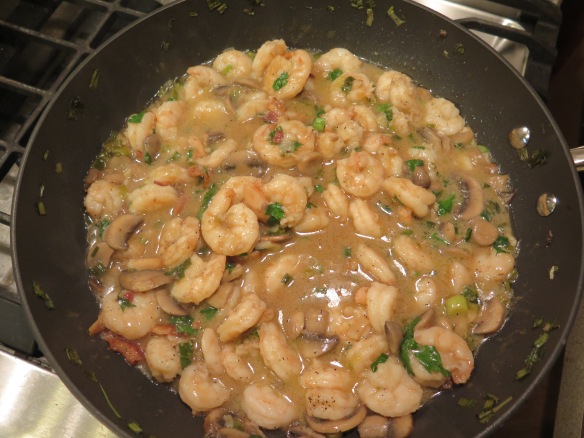 You can’t go wrong with this very traditional New Orleans’ style recipe. If you are’t used to eating shrimp and also grits, this is a good way to learn to like them.

You might notice the abundance of calories due to the heavy cream and stick of butter. Low fat or skim milk can be substituted in the grits recipe and the butter used to saute the shrimp can greatly be decreased. Still tastes good.

I prepared this recipe for my family last night, they loved it.

And for 2018, lets hope for a healthy, safe and prosperous year.

Method and Steps for Shirmp:

Method and Steps for Grits: