I finally got my chance to go apple picking this past week when we visited my daughter in upstate New York. The apple orchard was full of ripe apples — the branches were loaded with plenty on the ground. Within a short time we had picked 30 pounds of apples! 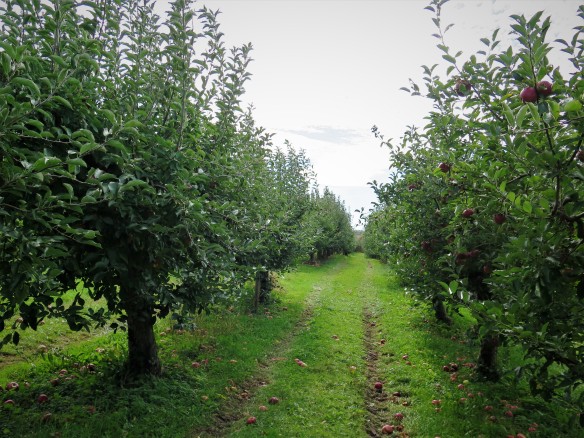 The orchard also made fresh apple cider from their own apples–no sugar or preservatives added. I brought cider home to Louisiana from our trip and plan to sip a little at a time to make it last. And I decided to use some of the cider to make “Apple Cider Ice Cream.” The ice cream is creamy and smooth, the apple flavor really “pops” and best of all, the ice cream is low-fat or “lite”. It is the perfect flavor for autumn.

For a fun activity we decided to try to find somewhere to pick apples ourselves. We headed out into the New York rural farm land in the morning and found “The Apple Farm” in Victor, New York. It was the right place and the orchard’s  trees were loaded with apples. Varieties ripe at this time which we picked were Empire, Golden Delicious and Ida Red. 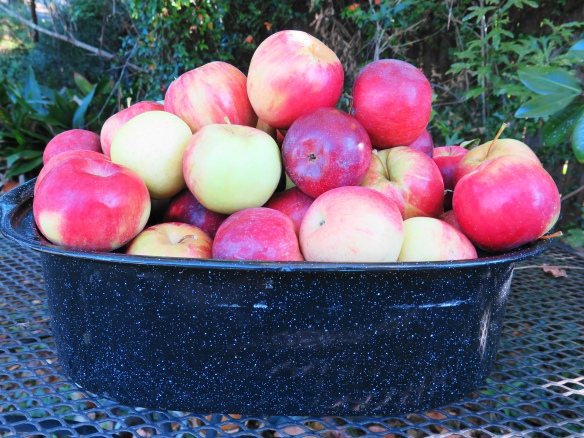 We picked and sampled the apples, too. 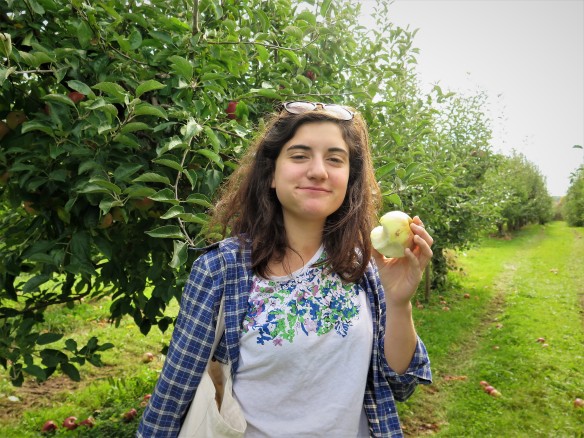 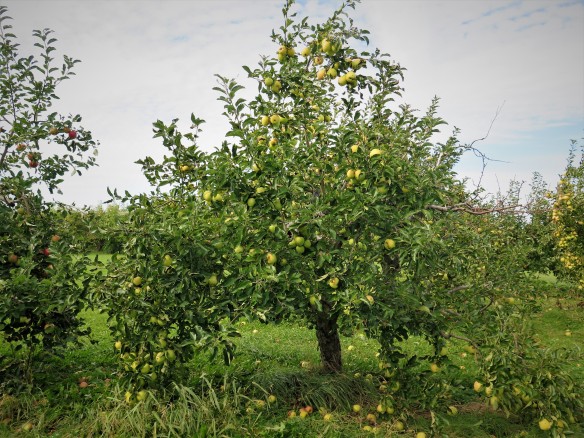 Apple Cider Ice Cream seemed like just the right flavor to churn in this cool, crisp October weather. I have a little Cuisinart Ice Cream Machine that makes a small batch of ice cream. Just right for my limited amount of apple cider. 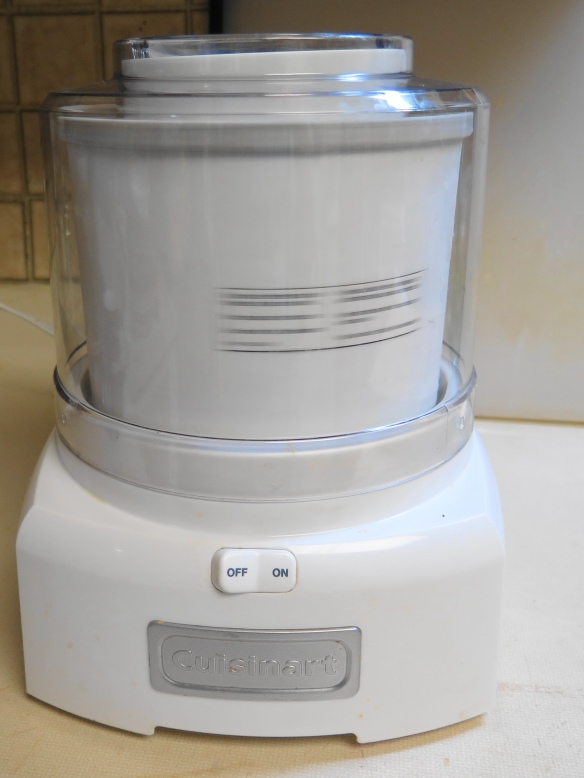 Here are the ingredients. The ice cream is a little tricky to make but it is worth the effort. This is a custard ice cream using egg yolks. These give a creamy and smooth texture, but the eggs can cause the ice cream to curdle. Attention to what you are doing is important. To reduce the fat, I used fat-free evaporated milk and whole milk rather than heavy cream.  You won’t know the difference. 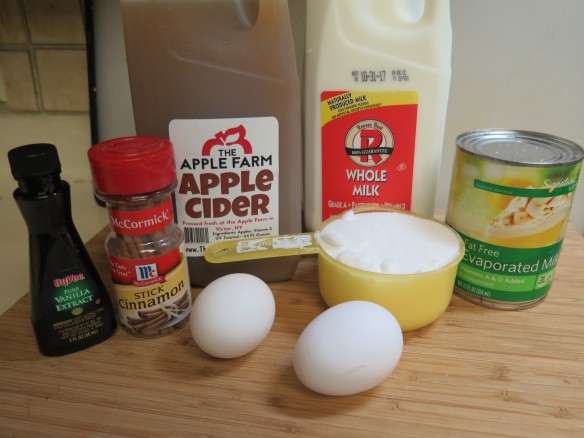 To intensify the flavor, the apple cider, sugar and a cinnamon stick are boiled on the stove until the apple cider cooks down into a concentrated syrup. Here we are getting started. 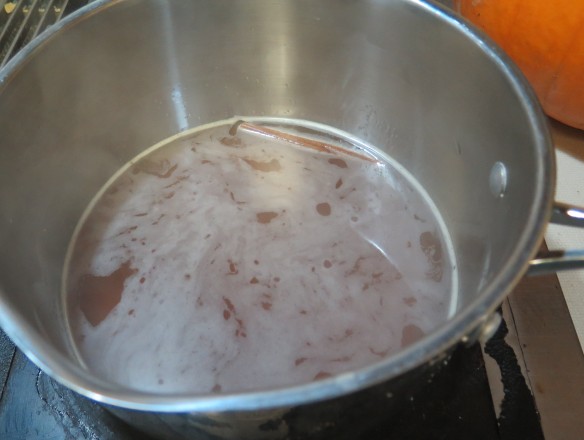 Here’s the tricky part to making this ice cream. As the 2 cups of cider concentrate to about 1/2 cup, the sugar caramelizes. This takes from 15 minutes to 30 minutes. The syrup will bubble and boil. If you cook too long, the liquid will totally evaporate and the result is burnt sugar. And this happens quickly. So, again, pay attention and don’t leave the stove unattended. When the syrup bubbles and foams it is time to get the syrup off the stove as shown in this photo. 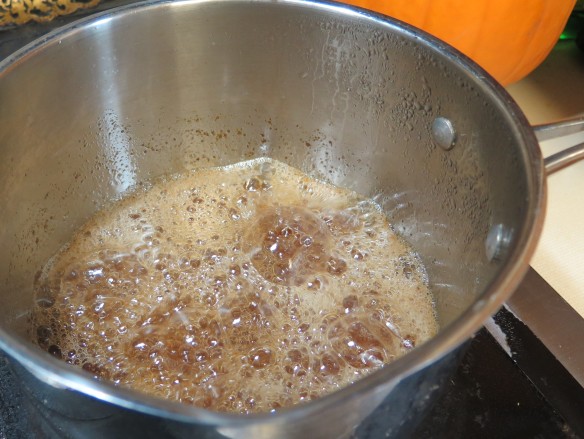 Here’s the syrup with the very caramelized sugar. 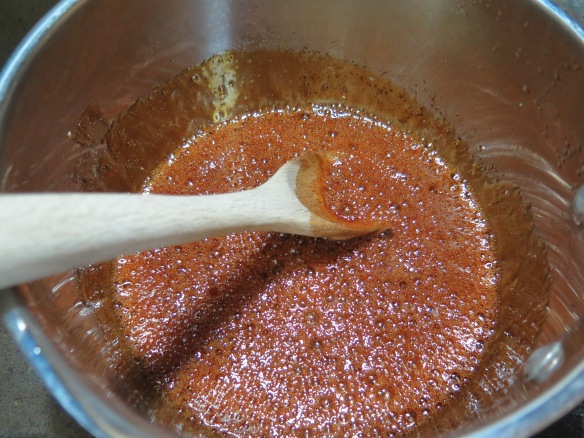 Slowly add the whole milk and evaporated milk and stir. Stir constantly until any hardened pieces of sugar are dissolved and the milk is incorporated. Remove from heat. Whisk the egg yolks in a small bowl until blended and yellow. Slowly add some of the mixture to the beaten egg yolks, a spoonful at a time. Stir constantly. Then add this back to the custard mixture. Cook on very low heat (or over a double boiler) until the custard thickens. Don’t let it boil. Last, add a little vanilla extract. Strain the custard. Here’s the custard ready to process. But first the custard must be chilled over ice water or refrigerated for several hours. Hot custard won’t freeze in this Cuisinart ice cream maker system. 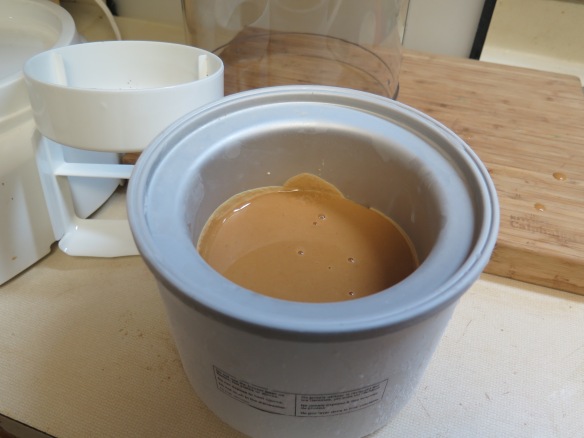 With my nice little Cuisinart ice cream churner, the bowl is frozen. (I keep the bowl in the freezer when not in use.) The bowl then imparts the cold temperature to allow the ice cream custard to freeze. The bowl turns and the beater which incorporates air is stationary. The custard is still soft when finished. Put in freezer to harden.

With all low-fat ice creams, they are the most creamy with first made. But this ice cream won’t last long! Using apple cider in the recipe gives a very pronounced apple flavor and is a great autumn recipe.

As we left “The Apple Farm”, we drove by a pumpkin patch with lots of apple trees in the background. Now for the pumpkins. It was a fun morning! 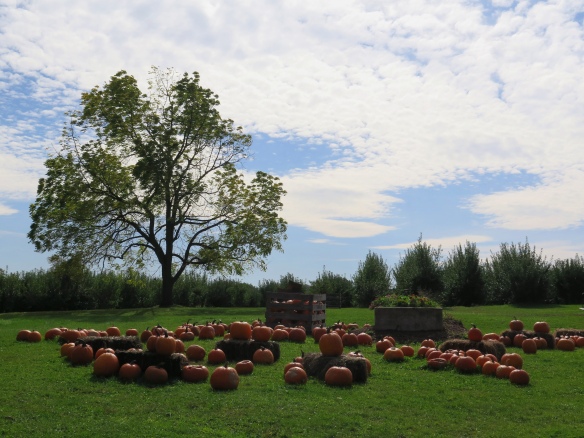 Perhaps we will come back again some time. 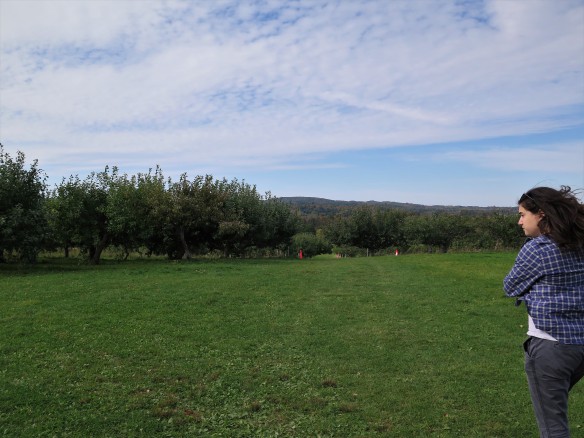 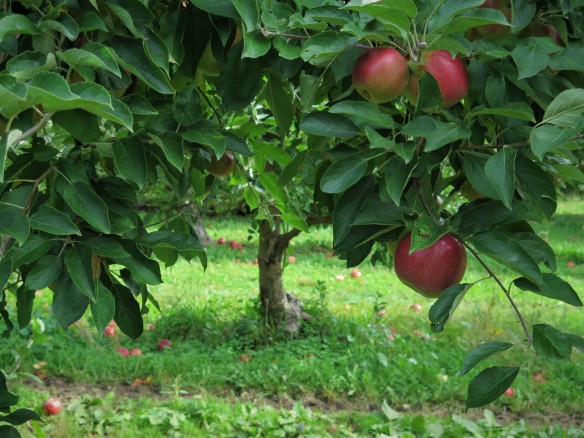