Matzo pizza is the Jewish mother’s answer for: “What do you feed the kids for eight days without bread or flour.” Since the Passover holiday lasts for eight days, it takes some ingenuity to plan meals without flour or leavening this long. Pizza made with a matzo crust tastes surprisingly like a Domino’s thin crust pizza. It became a standard in our kid’s school lunch boxes.

Matzo Pizza and the Story of Passover

I discovered Matzo pizza from my sister-in-law years ago when we went to visit in Houston for Passover. She made it for all the young kids one meal; they devoured it. I thought it was such a creative idea; and certainly beats eating matzo and peanut butter for 8 days (although peanut butter is restricted in some Jewish homes).

Passover is coming up this week. To recap the story of Passover, it tells of Moses’ attempts through various plagues to free the Hebrew people from slavery in Egypt. Their homes were “passed over” during the last of the ten plagues where first born sons were killed. The pharaoh finally agreed to let the Hebrews to leave, but they didn’t have time to let their bread rise. Passover tells of the story of freedom and the story is retold every year as a reminder.

Dietary restrictions and cultural customs for Passover are much more extensive than avoiding just flour and leavened foods. For example, Orthodox Jewish traditions include thoroughly cleaning their homes to remove all traces of leavened bread. Consuming leavened bread is certainly a primary restriction. Matzoh is actually made from flour and water, but since it is baked for less than 18 minutes it is allowed. Foods for Passover are specially prepared and certified by a rabbi as “kosher” for Passover.

Making pizza using matzo is simple; I’m doing this from memory. I made several variations with lots of different ingredients and cheeses to try to get this fine-tuned. If the steps look like different pieces of matzo; it’s because I used different batches of matzo pizza for the photos

Here’s what I came up with. Assemble all the ingredients. This can be as simple as matzo, cheese, spaghetti sauce and pepperoni or very elaborate

Pre-heat the oven to 400 degrees. Lightly oil a baking sheet with vegetable oil or olive oil or spray with non-stick spray. No need to use use aluminum foil – I skipped this step in subsequent variations. Place matzos on baking sheet. 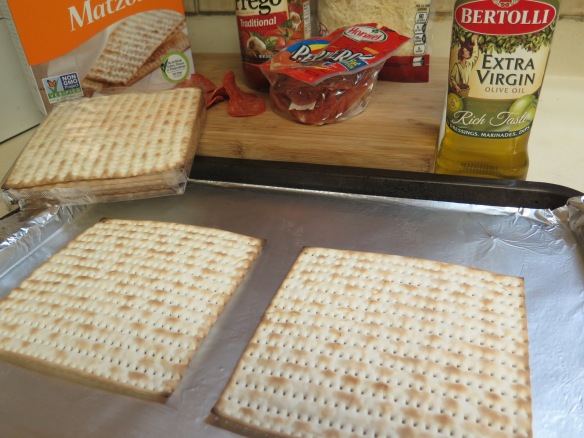 Cover the matzo with mozzarella cheese. I used about 1/3 to 1/2 cup of cheese per square. (Some brands of matzo are larger than others). I like placing the cheese on the matzo first (rather than sauce) so the cheese melts. This makes it easier to spread on the tomato sauce and other ingredients, the cheese doesn’t burn and  the matzo doesn’t become soggy.

Bake the matzo and cheese in the 400 degree oven for only two minutes. Just long enough to melt the cheese but not make it tough. Use the timer on your cell phone. 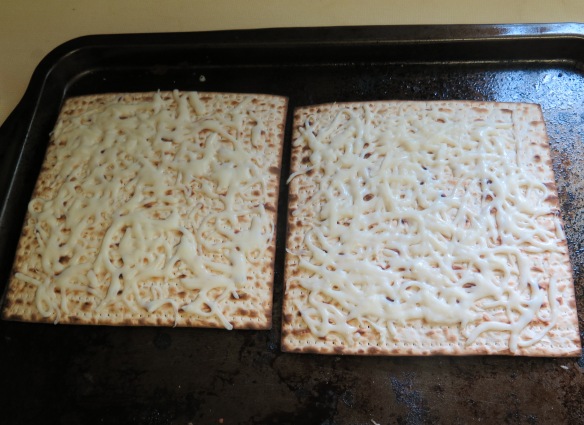 I like shredded cheese the best, although block cheese can be sliced thinly and layered on. Block cheese uses more cheese to cover the matzo; if you like double cheese pizza, this is an option.

Layer on the tomato sauce. I used either traditional Prego or Ragu spaghetti sauces. These brands of sauces are thick enough to spread; not watery. I used about 3 Tablespoons per square.

Layer on toppings. I love pepperoni and olive pizza. Here’s one with vegetables added too– onions, bell peppers and mushrooms. 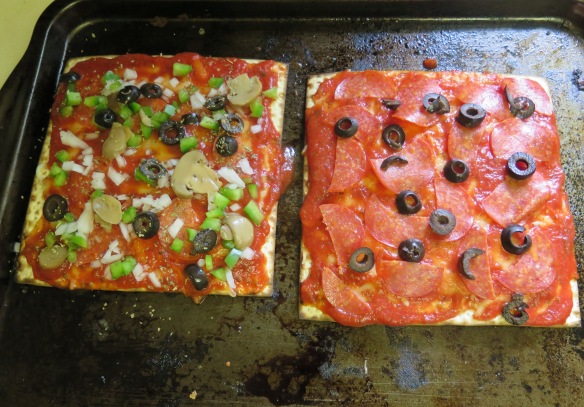 And my favorite — vegetables and tomatoes. Here I sprinkled on Italian seasoning which adds to the flavor.

Bake in the 400 degree oven for 15 minutes until the pepperoni becomes baked and the sauce bubbles slightly. Baking for longer periods of time resulted in burnt edges. You may need to lower the oven temperature to 375 degrees if the matzo is thin to avoid burning. 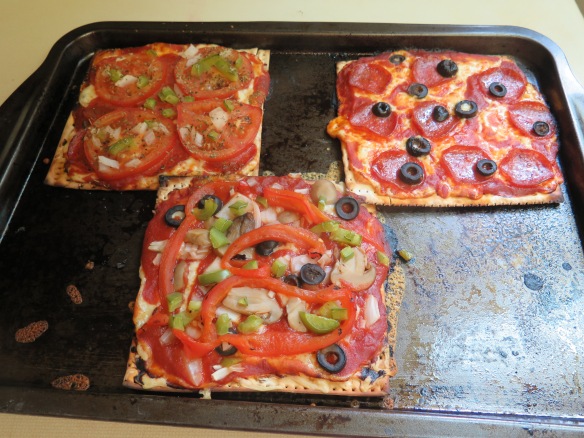 Serve and eat the pizza as soon as it is baked (although it will be cold if served in a school lunch box). The pizza cools down quickly. There is no end to the variations of pizza which can be made. Our matzo supply usually lasts past Passover. But we continue to make this pizza as long as the matzo lasts!

Ingredients for one pizza