Every summer in August when I was young, we’d travel from Virginia to Iowa to visit our grandparents who lived on an Iowa farm. I have many vivid memories of their farm; one is of the corn–a memory also shared by my cousins. We joked that corn was served at every meal: corn on the cob for lunch and supper and a corn dish at breakfast, too! 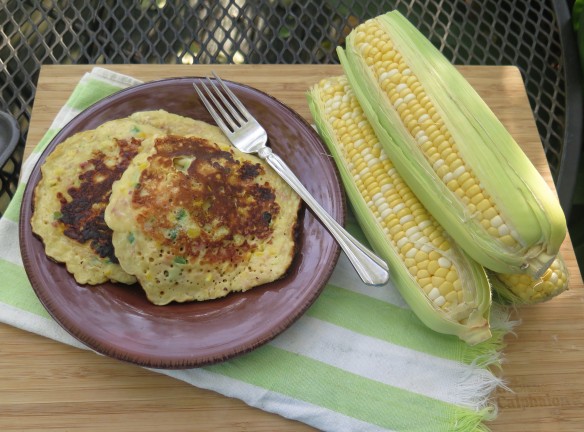 My grandparent’s farm was in Black Hawk County, Iowa, close to Waterloo. The land was purchased by their grandparents for one dollar an acre in the 1800’s after the Civil War. The farm was on the rich Iowa plains and the fertile land grew some of our nation’s best corn. This photo is of my grandfather with my brother in the late 1950’s. This corn was for the farm animals–not us–it did not taste good. However, my grandparents also grew sweet corn for the family. I asked my cousins and brothers for their recollections of how corn was served during these visits. Our best memory is just simply corn on the cob. Here’s what my cousin, Kathy Olde, says:

My one vivid memory of Iowa and corn is visiting Grandma and Grandpa Snavely when the sweet corn was being harvested. It probably only happened twice, maybe three times and it would have been between 1961 and 1964. I don’t remember shucking the corn. Grandpa probably did that outside. But I remember big pots of boiling water on the stove and dozens of ears being blanched, then shocked in cold water before being allowed to cut the corn off the ears.

Grandma would set us up with a cake pan and a paring knife and we would cut the kernels off the ears before she bagged the corn for freezing. We weren’t chastised too much for sneaking a bite of corn every now and then. It fascinated me the way the rows of cut corn stuck together until she would spoon them into the baggies. It was such an abundance of one of my favorite foods. To this day, I can’t cut corn off a cob without remembering late summer in Iowa in Grandma’s kitchen. And I know there was never air conditioning at Grandma and Grandpa’s or Uncle Paul’s but I never remember it being hot. Great memories!

Here are my grandparents–with their fruit trees in the background. My grandmother never cut her hair–she always wore it pulled back!

There is not much of a recipe for corn on the cob. So I looked through my grandparent’s cookbook which I inherited, “Granddaughter’s Inglenook Cookbook”, for how corn was prepared back in those days. Several recipes for corn pudding and corn souffle were checked. I also found an interesting one for corn fritters. Add a little more milk and it becomes corn pancakes. 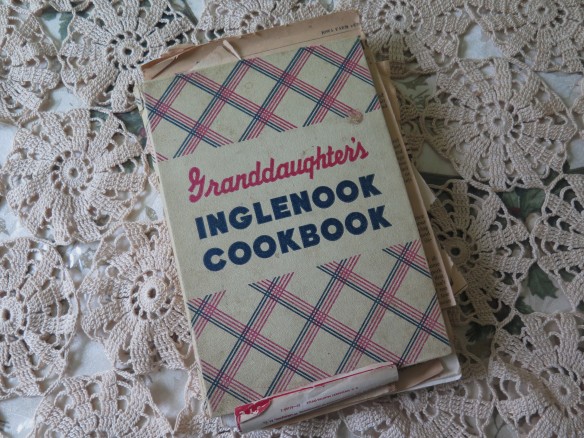 Savory Ham and Corn Pancakes is a recipe for a simple batter with corn and ham added. To season things up a little, I added fresh chopped jalapeno peppers.

The pancakes are easy to make and the result is a savory and filling pancake. It is a good way to add vegetables to a meal! Here are the ingredients using boiled corn on the cob. 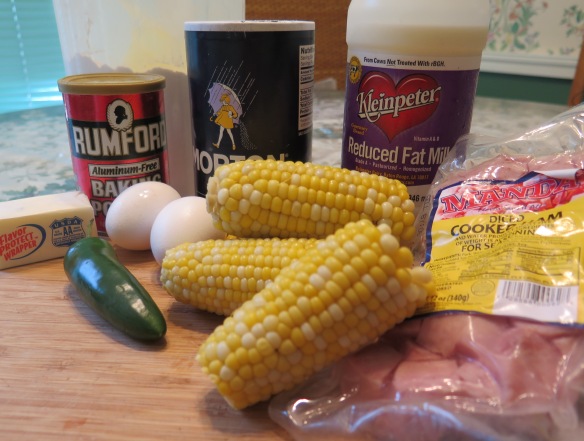 Cut the corn off the cob and chop the ham and jalapeno pepper. Add it to the batter of flour, baking powder, salt, milk and eggs.

For pancakes, the batter should be relatively thin. Add more milk if needed.

My husband is the best pancake-maker. He is patient which is what you need to make pancakes. Pancakes are best made using a heavy griddle or a heavy skillet–such as this cast iron skillet–and fried over relatively hot heat. A heavy skillet holds the heat well. My husband made four super-sized pancakes. Or you could make 8 smaller ones. Cook the pancakes in a well-oiled skillet until almost done and then flip over to finish frying them.

These pancakes are very filling–almost a meal in itself. They can be served for breakfast or also lunch and supper. Great when served with sour cream. 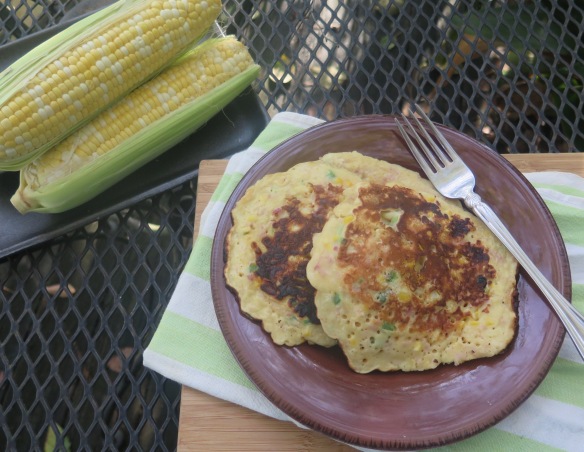 Enjoy ways to use fresh vegetables in the summer time! Brings back memories.