Nothing is better than the aroma a loaf of homemade bread baking in the oven. A Mardi Gras King Cake is a rich, sweet yeast bread. It reminds me of a Swedish Tea Ring or Danish Coffee Cake. 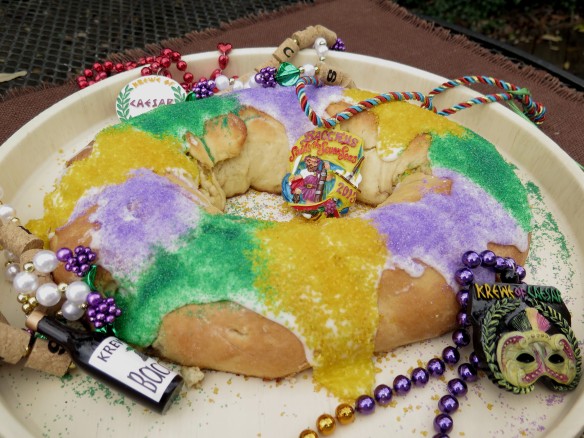 Baking bread by the traditional method can be a time consuming process. Through much practice, I’ve developed a system that speeds things up and makes bread baking much easier. Since it’s Mardi Gras time and carnival season here. I’ve brushed up on my bread-making skills. Here are a couple of tips learned along the way.

Bread requires a great deal of time in kneading to develop the gluten in the protein, so that the dough will rise and keep it’s structure while it bakes. With that in mind, it is worthwhile to use at least part of the flour with one specifically made for breadmaking–it has a higher gluten content. To cut down on the time of kneading by hand, I make the bread dough in a food processor. I tried using a mixer, but my old Sunbeam mixer wasn’t strong enough and froze up. Early on, I invested in a Cuisinart food processor which has a dough attachment.

All food processors are not the same. If you are planning on purchasing one; check out the reviews to make sure it will handle bread dough. Ideally, I’d use a Kitchen Aide mixer. These are designed for heavy-duty tasks such as making bread dough. I purchased a Kitchen Aide mixer for my son–he moved away. I’m pleased that he’s using it (yes, college students can cook) and has made many variations of bagels with the mixer.

Use a yeast package that has not expired. Although this seems obvious, it wasn’t to me. I’ve watched bread sit on my counter top for several hours not rising; only to discover that the yeast was old. Yeast may be dormant, but it is living–trust the expiration date printed on the label. I use Rapid Rise yeast, as I like to get a jump-start on things. This time, the dough rose to double its size in 45 minutes! Pretty impressive. The second rising took less that than.

Purchasing an inexpensive pocket thermometer is a wise investment. Yeast needs to be between 120-130 degrees  F. to begin growing. Higher temperatures will kill the yeast; at lower temperatures, the yeast won’t grow.

Dough needs a warm place to double in size. In the winter, I turn on my oven and let the dough sit on top of the stove. (I have a convection oven that allows the heat to rise up the center of the burners.) In the summer, I avoid drafts of the air conditioner. My son says he puts the dough in the engine of his car–that probably works if you can keep the dough clean.

King Cakes found at Mardi Gras time, are rich, sweet yeast breads. MIne contain eggs, a a little more margarine and sugar that a recipe dinner rolls. Often king cakes have fillings–imagination is the limit here.

For one filling I used a cherry and almond filling with cream cheese. (For this filling I thickened the juice of a can of tart cherries with 3 T. sugar, 1 T. cornstarch, 1/4 tsp almond extract by heating this on the stove. Then I added back the cherries. I softened the cream cheese and added 1/4 cup sugar and 3/4 cup finely chopped almonds). 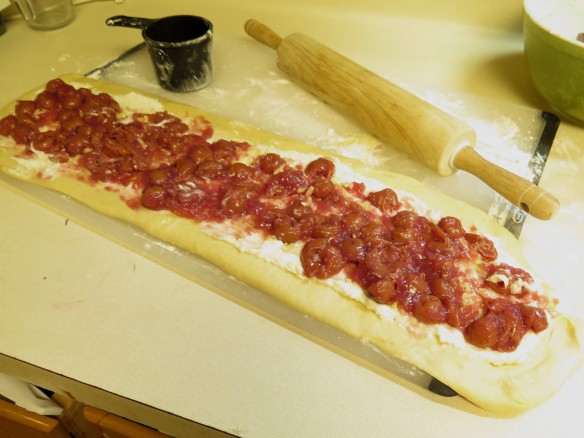 The first flowers in my garden every year are pretty, yellow Confederate Jasmine growing on a vine and fragrant grape hyacinth from bulbs that come up every year. It will be spring soon.