This week I’m travelling back in time to a recipe from the 1980’s. While searching through cookbooks on my bookshelves, I rediscovered one which I purchased during those years. I’m a collector and never throw anything away — this cookbook is a good one. Glancing through the pages, I saw notations by recipes which I had made; most with “excellent” written by them with many, many memories. I decided to make one of the recipes, “Baked Beans à la Charente”, a vegetarian bean casserole topped with fresh tomato and eggplant slices. A little cognac in the beans gave some zing. Yum.

The cookbook is The Vegetarian Epicure.  I purchased it in the early 1980’s while living in Detroit. I don’t really remember the circumstances, but do remember it was one of the first “real” cookbooks which I ever purchased. Each recipe was on it’s own page and the ones I tried were all winners — breads, vegetarian casseroles, soups — gastronomic delights. I really wasn’t much of a cook back then; so preparing these recipes made accomplishments which were especially rewarding.

The cover is graced with a young lady with long flowing hair — the introduction includes suggestions of menus for dinners and how to entertain, noting that certain dishes are wonderful for snacking “if grass is smoked socially in your home” and your guests develop “the munchies.” Oh, those were the hippie days! Who couldn’t like this cookbook?

The cookbook author is Anna Thomas, born of Polish descent who moved to this country as an infant. She learned to cook, with influence of her family’s cuisine, and loved to entertain friends while in graduate school. Friends suggested she write a cookbook and this resulted in The Vegetarian Epicure, written while she was a film student at UCLA. It’s success lead to a second cookbook, The Vegetarian Epicure, Book Two.

Anna writes screenplays and produces films. Her screen credits include My Family, Mi Familia and El Norte, both of which were nominated for Academy Awards. Over the years, Anna’s interest in cooking has continued. She’s followed the success of her first books with others including: Love Soup, The New Vegetarian Epicure, From Anna’s Kitchen: Plain and Fancy Vegetarian Menus and the Vegan Vegetarian Omnivore. Her style of cooking has changed over the years; perhaps more sophisticated while still simple. The same interest in vegetarian menus continues. Here is Anna’s WEB site where you can learn more about her cookbooks and what’s she’s doing currently:

I’m trying to include more plant foods, beans and legumes in my diet. So I decided to make a recipe from The Vegetarian Epicure. The recipe, Baked Beans à la Charente, is made with dried white beans – I used Louisiana Blue Runner brand — which are cooked with savory seasonings, and then baked with tomatoes, wine and cognac and topped with fresh tomato and eggplant slices. A hearty meal.

What is Charente? It’s an area of France which includes the city of Cognac.

Cooking dried beans is a rather time consuming process. You need to plan ahead. The recipe calls for soaking the beans overnight. After soaking the beans, they are cooked for several hours until tender. Add in savory seasonings of onion with cloves, garlic, thyme and a bay leaf.  At this point, the beans are mighty tasty as is; and my husband finished off several bowls before I finished the casserole.

But I did manage to finish the casserole. The beans are drained, then a sauce of onions, tomato paste, parsley, wine and cognac is added. 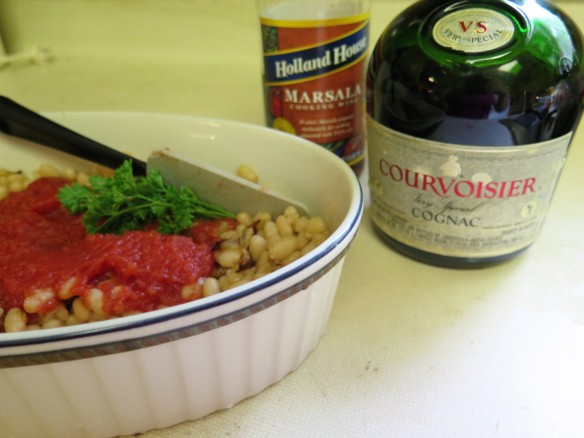 Top the beans with fresh tomato and broiled eggplant slices and bake. The result is a delicious casserole. These beans were eaten quickly!

I will keep this cookbook out on my counter; there are several more recipes which I plan on making again, favorites from those years. Back in the 1970’s and 1980’s we were just getting used to the idea of reducing saturated fat and cholesterol; I’m sure some of these recipes can be adapted along those lines.

This recipe is reprinted as is with permission from the author, Anna Thomas.

From: The Vegetarian Epicure, 1972. Random House: New York. Used with permission of the author, Anna Thomas. 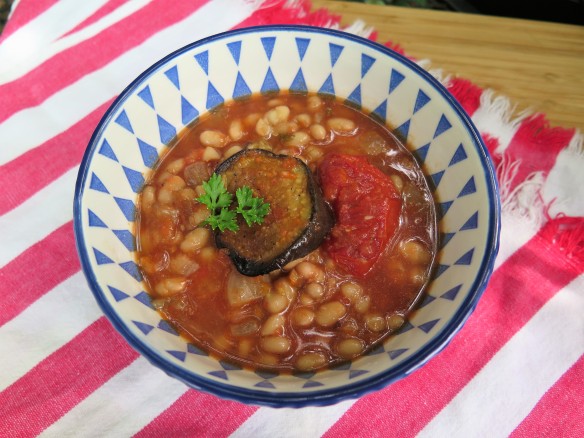