Valentine’s Day calls for a special dessert. I’m making an Ice Cream Brownie Cake. This started out as a birthday cake. For Valentine’s Day, I’m attempting a special effect by making it in the shape of a “dome”. The dessert has a brownie base and is topped with an ice cream dome and covered with a special brittle, magic chocolate shell. I added a few Maraschino cherries for effect. It you are a chocolate lover, this cake is delicious. 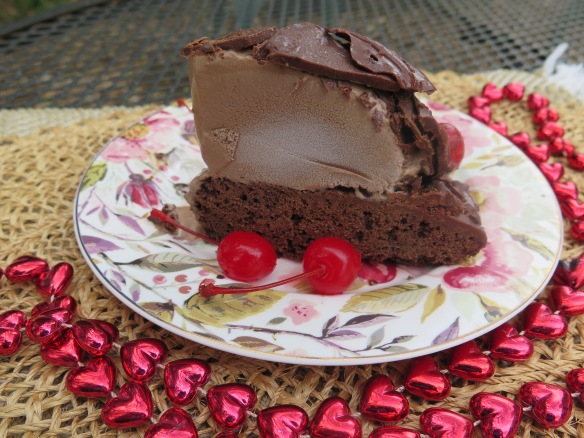 This started out as a birthday cake. Over the December holiday, we celebrated two birthdays together: my 14-year-old grandson and our 94-year-old mother-in-law. 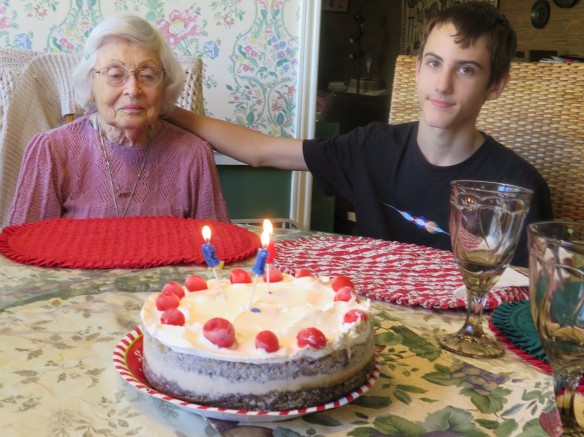 The teenager really doesn’t like cake. So what do you do for a birthday celebration without cake? I made an ice cream cake using “Benjamin’s Brownies” for the base with whipped topping and maraschino cherries for decorations. The birthday teenager loved the cake.  Really, everyone loved the cake. It was one of the best birthday desserts I’ve made. 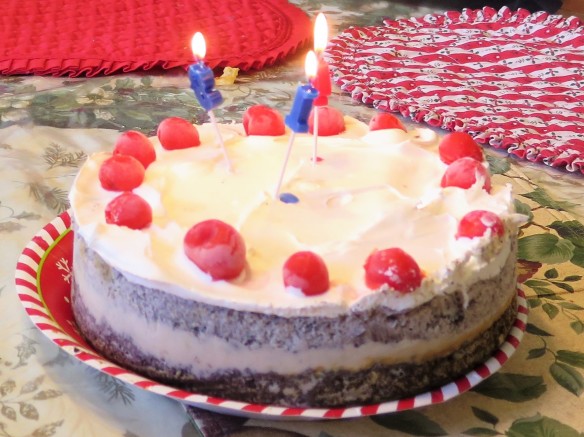 For Valentine’s Day, I got the idea of making the ice cream brownie cake in the shape of a dome and pouring a magic chocolate shell over the ice cream. I wanted to use the type of chocolate that coats ice cream bars. It becomes brittle and hard when frozen. And my chocolate did freeze into a hard shell. It “snapped” when cut as you can see. 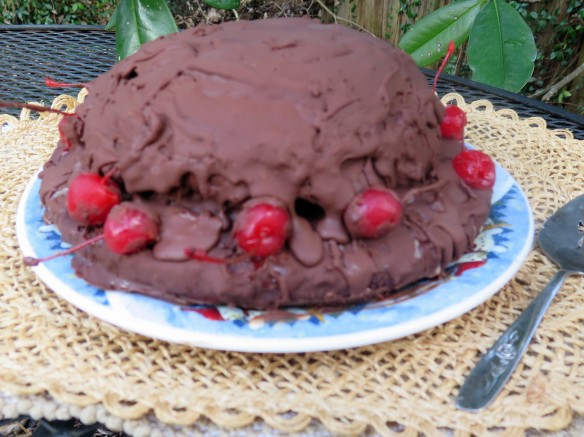 The idea for “the dome” came from a Martha Stewart recipe in one of her magazines. She made this dessert for Valentine’s day and of course her ice cream “bomb” was perfect.  I‘ll have to practice more to get my chocolate shell even and smooth. But you can get the general idea. My dessert tastes good and is fun which is the idea!

This recipe really isn’t hard to make and it is very impressive. It is a interesting variation and a change from just a piece of cake and ice cream. Great for teenagers.

There are two “secret ingredients” in this recipe. The first is the hard chocolate or “magic shell.” To make this, I melted semi-sweet chocolate chips. To get the chocolate into a really hard shell, the secret is to add coconut oil. This ingredient  hardens as it cools to room temperature and becomes really hard when frozen. Coconut oil is a saturated fat and is not liquid at room temperature. The flavor is neutral so it is perfect for this topping. 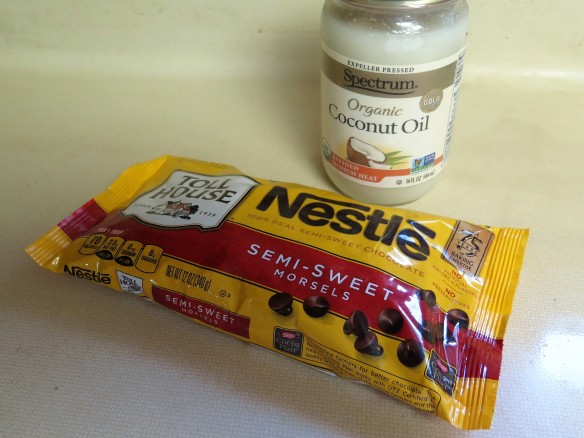 The second “secret ingredient” in this cake is the brownie recipe used for the cake base — “Benjamin’s Brownies.” It is an old recipe from my files; named after my son — perhaps he helped me bake these brownies when he was young. The brownies aren’t too rich or gooey — more of a cake-type brownie. The recipe uses cocoa powder rather than baking chocolate bars. Sometimes cocoa powder gives an after taste; but when frozen these brownies had wonderful chocolate flavor.

To make the recipe, bake the brownies in a 9″ springform pan with removable sides. Here’s the brownie batter ready for baking. It is a thick batter. 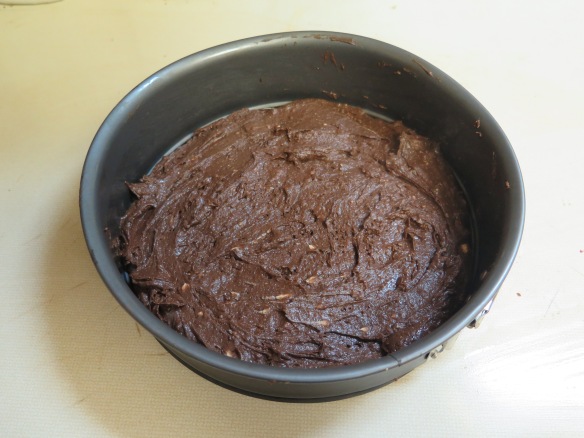 Meanwhile, let two pints of ice cream soften — using flavors of your choice. Line a bowl that fits the 9″ baking pan with plastic wrap and let the wrap over hang the edges of the bowl. It is okay if the bowl is much larger than the cake pan because you only add ice cream to fill about 1/3 of the bowl. Add the ice cream. Cover with the wrap and re-freeze. It is preferable to do this step several hours before assembling the dessert so the ice cream can refreeze. 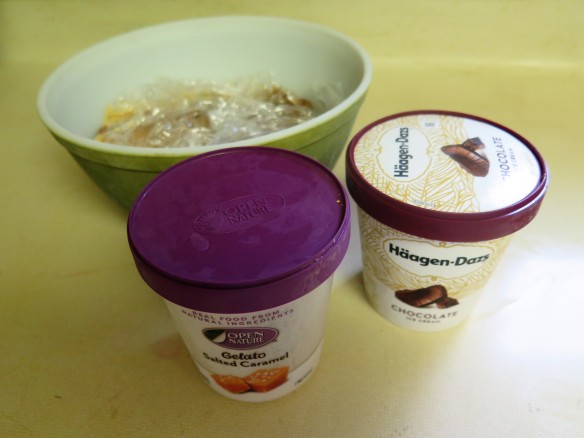 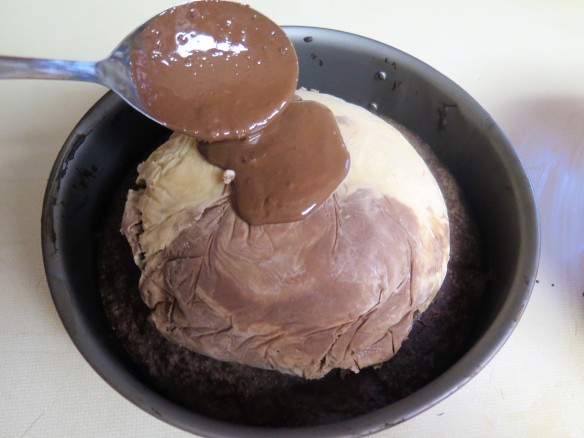 There apparently is an entire technique and skill to melting chocolate so that it retains its shine and silkiness. That is well beyond my scope of my blog. My chocolate shell tastes and looks good–passes my kitchen test.

When ready to serve, remove the side of the spring form pan and transfer to serving plate. This is a hard dessert, a flat plate or board is best. 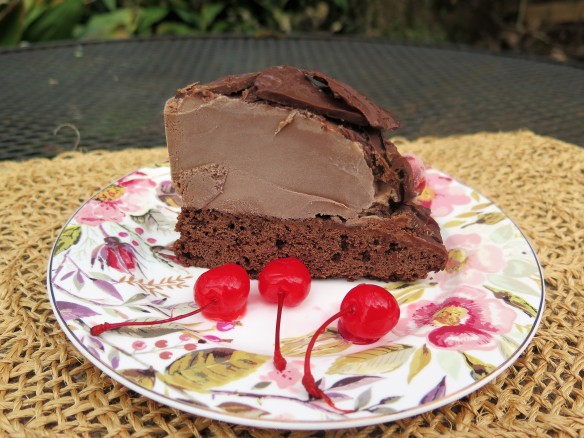 This dessert is delicious for Valentine’s Day or a birthday for a teenage who doesn’t like cake. It’s a keeper.  So enjoy this unique dessert for your family for a special occasion.