Here’s a recipe that is unique to southern Louisiana and uses summer fresh corn on the cob. Macque Choux is a Cajun dish — stewed corn with seasonings. There are as many variations as there are Cajun cooks. Mine is a very traditional recipe.

What is Macque Choux?

Macque Choux is a Cajun dish, stewed corn. It is flavorful and delicious and you won’t find it outside of Louisiana–it is a very local dish. The kernels of corn are cut off the corn cob along with the juice. The corn is sauteed on the stove along with onions, bell peppers and tomatoes for seasonings and then simmered for several hours. The dish becomes thick and creamy and the flavors blend together. It’s a great way to use a large picking of summer corn.

The origins of Macque Choux are unclear. The French Cajun farmers/settlers who moved here from Nova Scotia couldn’t grow their traditional wheat, cabbage and turnip crops in the hot Louisiana weather. So they incorporated corn into their diet — taking if from the native Indians. French explorers noticed an Indian corn dish that appeared similar to their French “sagamite”. Perhaps this became Macque Choux.

Explorers with d’Iberville traveling through southern Louisiana in 1699 recorded a dish made with of corn, bear oil, succotash and cornmeal. (“Stir the Pot: The History of Cajun Cuisine” by M. Bienvenu, et. al.) In addition to corn, Macque Choux has Afro-Creole influences of bell pepper and tomatoes.

There are as many variations to this dish as there are chefs. The traditional method is to cut the raw corn kernels off the cob. I’ve also seen recipes using cooked corn on the cob, frozen corn and canned creamed corn. Another variation includes seafood or meat – I’ve seen recipes with shrimp or sausage added.

Some cooks add milk or cream to help give a creamy flavor. This is usually served as a side dish, but if there is lots of meat added, I guess it could be the main dish, too.

This recipe comes from friends, Joe and Lorena Besse, of Scott, Louisiana, deep in Cajun country. The primary language of Lorena is French–she spoke it growing up and in their home. Lorena is deceased, but Joe recounted the recipe to me one afternoon. Joe is 79-years-old and sharp as a tack. Lorena did the cooking and Joe helped; here’s what he remembers. This photo is Joe Besse (left) in 2006 when we took a trip to visit a friend, Mama Redell (right), about a cooking demonstration we were planning.

Joe and Lorena would make Macque Choux when they purchased a large picking of corn from a local farmer in the summer. Joe says that large ears of corn work best. The trick to Macque Choux is to cut the corn off the cob, but only cut part way through the corn kernels. 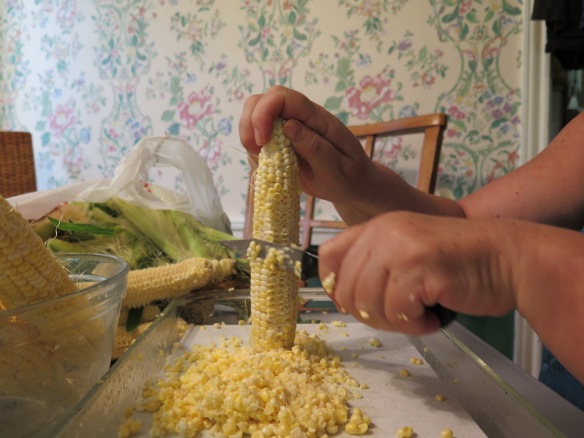 Then scrape and scrape the remaining kernels along with the cream into a bowl with the knife perpendicular to the cob. Joe recounts that this is messy; often they’d have so much corn spattered on them, they’d have to change clothes.

After the corn is cut off the cob, the rest of the recipe preparation is easy. Seasonings – onions, green bell peppers (I added a sweet orange pepper) — are sauteed until translucent. 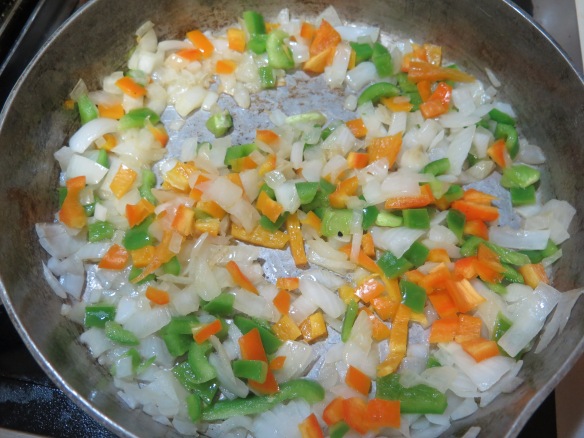 Then the corn is added and sauteed for several more minutes.

Then the canned tomatoes with chilies are added. Add some salt and pepper.

Cover the pot and  simmer on the stove for 3 hours. Yes, 3 hours. Cajun cooking is often a slow process – but the flavors blend together and corn becomes creamy. 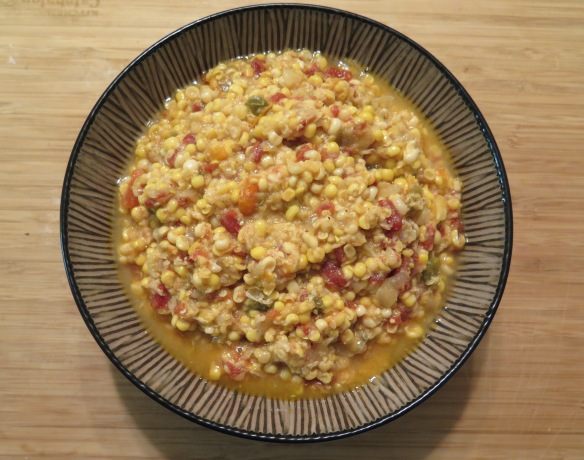 Here’s what I wrote down from Joe’s recollections. One questions that came up is how much corn do you use?  Joe says often they would make a large pot; so use as much corn as you have. I used a dozen small ears of a sweet, bi-color corn (white and yellow kernels). Large corn ears are preferable. And make this when the corn is just picked – or the sugar will begin to turn to starch and the corn will dry out.

“Stir the Pot: The History of Cajun Cuisine” by Marcelle Bienvenu, Carl A. Brasseaux and Ryan A. Brasseaux. Copyright 2005 by Hippocrene Books, New York.